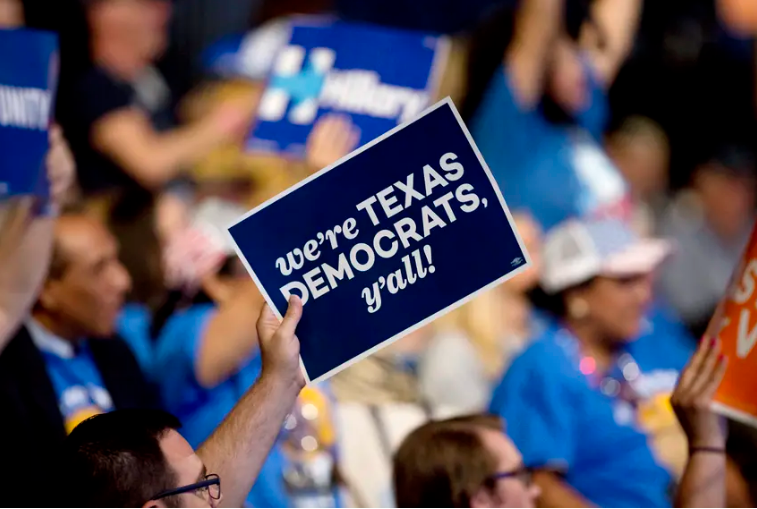 Texas Democrats have come to the conclusion that they fell short of their expectations in the 2020 election largely because Republicans beat them in the battle to turn out voters, according to a newly released party report.

The Texas Democratic Party laid the blame in part on their inability to campaign in person, particularly by knocking on doors, during an unusual election cycle dominated by the coronavirus pandemic.

The party also said its voter turnout system was inefficient. It contacted reliably Democratic voters too often and failed to reach enough “turnout targets” — people who were inclined to support Democrats, but weren’t as certain to actually show up at the polls.

“Despite record turnout, our collective [get out the vote] turnout operation failed to activate voters to the same extent Republicans were able to,” according to the “2020 Retrospective” report, which was authored by Hudson Cavanagh, the party’s director of data science, and was first obtained by The Washington Post and The Dallas Morning News.

Texas Democrats did manage to register and turn out voters in record numbers in 2020, but Republicans likewise beat expectations — enough to erase any gains made by Democrats and stave off what some hoped would be a “blue wave.”

Democrats had high hopes for Texas in 2020. Public polling had indicated that Democratic nominee Joe Biden had a chance to flip the state. And the party was hopeful that it could also flip control of the Texas House and unseat some Republican members in the U.S. House. But Biden ended up losing by nearly 6 percentage points and Democrats didn’t make any net gains in the Texas House or in the Texas congressional delegation.

Campaigns across the country were forced to scrap in-person campaigning early on in the election year as the threat of COVID-19 grew more serious. While some Democrats resumed door knocking as the election neared, such as Houston’s state Rep. Jon Rosenthal, many remained cautious in what resulted in a costly move.

The report described the party’s voter targeting efforts as “inefficient,” saying it didn’t have reliable contact information for some of its highest priority targets.

“The pandemic prevented us from getting the most out of our most powerful competitive advantage: our volunteers,” the document said. “We struggled to reach voters for whom we did not have phone numbers, who were disproportionately young, folks of color.”

But Texas Democrats pushed back on the idea that they lost ground with Latino voters — particularly in counties in the Rio Grande Valley, which Biden carried by 15 points after Clinton won them by 39 in 2016.

Texas Democrats conceded that Latino voters in parts of the state did move toward then-President Donald Trump, but said those same voters continued to support other Democrats down the ballot.

In addition, Texas Democrats contend that data suggesting a massive shift toward Republicans among Latino voters is more accurately explained by increased turnout among Republican Latinos.

“Roughly two-thirds of Latinos continue to support Democrats, but Republicans Latino voters turned out at a higher rate than Democratic Latino voters in the 2020 cycle, relative to expectations,” the report found.

Despite an underwhelming performance in 2020, Texas Democrats continued to paint an ambitious picture of a “sustainably blue” state over the next 10 years.

The party concluded that with “sufficient investment and ambition,” Democrats can register 100,000 to 150,000 more voters than Republicans per cycle and flip Texas blue by 2024.

That’s only possible if Democrats build a “robust turnout operation” with cooperation from statewide organizations, county parties, campaigns up and down the ballot, and “surgically target persuadable voters,” the report said.

“If we can respond to these challenges, our 2020 margin quickly becomes surmountable. The goal is not to win one individual election,” the report said. “With sufficient investment and ambition, Texas can be a reliably Democratic state in the next decade.”

The Texas GOP pushed back against the Democrats’ relatively rosy outlook on the state’s trajectory.

“The Democrat autopsy fails to adequately explain their complete collapse of support across the Rio Grande Valley, and it is just an attempt to justify their historic spending that garnered them no gains,” spokesperson Luke Twombly said in a statement. “The Texas GOP will continue to out-hustle the Texas Democrats in every election, it doesn’t matter how much money from Hollywood and Manhattan they ship in.”