Please ensure Javascript is enabled for purposes of website accessibility They were targets of racist remarks. Now, these NYC students want to talk about Asian American history — and hate. - THE CHICAGO HERALD Press "Enter" to skip to content

Home » They were targets of racist remarks. Now, these NYC students want to talk about Asian American history — and hate. 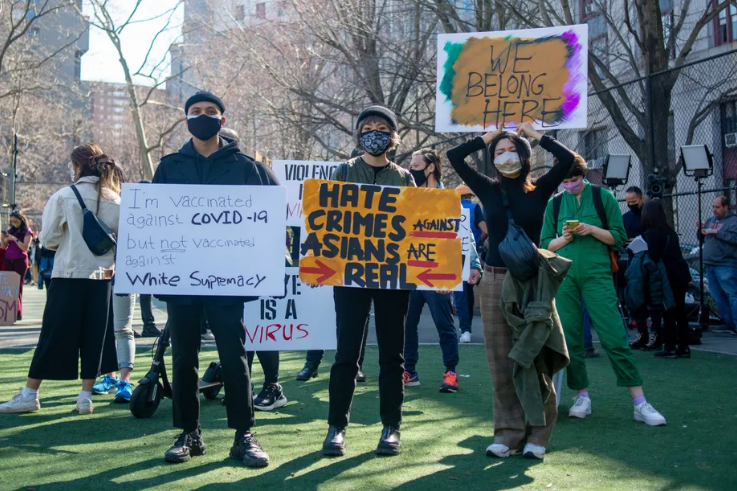 They were targets of racist remarks. Now, these NYC students want to talk about Asian American history — and hate.

The teens have been painfully aware of the surge of anti-Asian hate crimes over the past year. Across the five boroughs, this past weekend alone saw at least four possible anti-Asian hate crimes, even as hundreds took to the streets protesting to end such assaults. Amanda and Joyce, who are friends and juniors at Manhattan’s School of the Future High School, were the targets of racist remarks amid news of a novel coronavirus that had originated in China.

As they continued to hear about violent acts targeting New York’s diverse Asian community, the teens — who have shared their own experiences with racism on a student-run podcast that later won an NPR contest — have begun to fear for their safety in new ways.

“Whenever I would walk on the street, I was seriously afraid I was going to be harmed, and my life was going to be taken away, even though those people on the street were casually walking and going about their day,” Amanda said of her anxiety levels last spring. “That’s how panicked and insecure I was.”

The incidents over the past year have galvanized both teens, inspiring them to confront the issue of anti-Asian hate and violence and to push for more Asian representation in their school’s curriculum. They want their classes to discuss anti-racism and include more about Asian American history in hopes of bringing others into the conversation.

In a note to families last week, New York City’s new schools Chancellor Meisha Porter described the shooting and other reported anti-Asian hate crimes as “horrific.” She pointed to a list of resources that the education department shared with teachers to fight school-based hate crimes and to support students emotionally. On Tuesday, during a City Council budget hearing, Porter said students must be able to see themselves in their lessons, when asked how schools will support students returning to campuses after more than a year of disruption to in-person schooling.

“What this recent wave of hate crimes against our Asian American brothers and sisters has shown us in a real way [is that] our diversity and inclusion plan has to be about what happens in classrooms, how we train our teachers, how the adults show up for our students, and so they are all very deeply connected tissue,” Porter said. “And the learning loss is connected also to students being able to really see themselves in the curriculum they experience.”

In the year since their stories were featured on the student podcast, both teens have been more isolated since they — along with the overwhelming majority of Asian students citywide — opted to learn fully remotely. But fears linger.

After the Atlanta shooting, Amanda and Joyce said they were disappointed that their teachers had not brought the topic up in their classes the next day. Joyce said she wished they had created a space to discuss what’s been going on just as they did in June, as Black Lives Matters protests swelled in the aftermath of the police killing of George Floyd’s killing in Minneapolis. (Their principal, Stacy Goldstein, said teachers were likely still planning out lessons.)

Last year, 28 hate crimes were reported against Asian New Yorkers, compared to three in the prior year — though advocates and police officials suggest many more incidents go unreported, according to the New York Times. And the Asian American community — a diverse group that includes nearly 20 different ethnicities — is reeling in other ways. Unemployment claims among Asian-Americans surged past other racial groups last year, and one report found that unemployment among Asians grew past 25% in New York City during lockdown.

Amanda said she was raised “to mind my business,” but she’s choosing to speak out.

“There are people like that in my life who choose to endure the harm they receive because they don’t want to cause any trouble to other people, or they are afraid they won’t be heard,” she said.

In one incident, Amanda said she and Joyce were standing outside with a group of other Chinese American students when a group of upperclassmen laughed in their direction and said “that group of Asians” is spreading the virus. Amanda recalled a fellow Chinese American student pointed at their group of friends and said, that they “have coronavirus because I live in Chinatown.” One day during lunch, Amanda was eating spicy noodles when the spiciness caused her to cough. A boy nearby said she must have the coronavirus.

“I had to scream back at him that I don’t have coronavirus just because I was coughing, but he just took it as a joke, like, ‘Yeah it was just a joke. You’re overreacting,’” Amanda said.

On a separate occasion, Joyce said one of her classmates asked her if she knew how to make “bat soup” — a reference to reports that the virus likely first emerged from a bat.

Both students shared their experiences during writing club, alarming their club’s supervisor, who was their former English teacher. That educator alerted school administrators, who contacted the parents of at least one of the students and asked the teen to apologize, according to Goldstein.

Goldstein now says there should have been a bigger discussion among students at the time about what Joyce and Amanda experienced.

Last week, the morning after the Atlanta shooting, Goldstein penned a note of support and solidarity to families. In a separate email to staff, she encouraged teachers to heed her advice from a few weeks ago: Consider planning discussions about anti-Asian racism into lessons. She noted that 21% of their middle schoolers and 13% of their high schoolers identify as Asian-American — compared to about 16% of students citywide — and that she wants “to be explicit about our support for their communities’ safety and dignity.”

“It’s also an important opportunity to explore the intersectional reality of civil rights efforts and spaces for solidarity,” Goldstein wrote.

Goldstein expected teachers to begin talking about anti-Asian discrimination and racism in weekly student “circles,” which are similar to advisory periods and are spaces for students to share their feelings.

But students often skip their circles, Amanda and Joyce said. They became disappointed over the past week not to hear their teachers weave anti-Asian racism into lessons. That changed on Tuesday, when their math teacher had students watch a New York Times video about the recent rise in hate crimes against Asian people and had students use Jamboard, a virtual whiteboard, to anonymously share their takeaways. He shared data about the number of anti-Asian hate crimes in different cities in recent years, highlighting the percentage rise in New York City. Students were asked if they were aware of or had experienced anti-Asian crimes online, at school, or in their communities. Most said yes.

“Not everyone is active in this, but I appreciate my math teacher and those who participated for doing so,” Amanda wrote in a text message.

Amanda wants to see teachers embed the topic of historical and structural racism into lessons, similar to what her math teacher did. That would make students feel “heard” and “cared about,” she said.

She also wants to see more of herself and her culture in the curriculum. Specifically, she’d like more lessons about Asian immigration to the United States.

Joyce added: “I think that right now in English and history we are doing a lot of how the past relates to the present. I feel like that should also be implemented into our curriculum — how different races impact and make America into what it is, and how they continue to do that, so it’s not just like white Americans, you know?”

Joyce also believes there is not enough emphasis on Native American and Hispanic history in her classes. Goldstein disagreed, noting that there are multiple big units about Native Americans, including their fight for independence, Latin American movements, and the “havoc” that American imperialism caused in Latin American countries.

Anti-Asian racism comes up in sixth and ninth grade global history courses and an eighth grade immigration unit, but “it’s not a pervasive enough part of the curriculum,” Goldstein said. She wants her school’s equity committee to consider these gaps as they rethink their school’s curriculum this summer, as their administration also grapples with becoming more integrated through changes in its admissions process.

“We talk about discrimination in general and microagressions and equality in a lot of different places, but I don’t think we specifically talked about the Asian American experience,” Goldstein said. “I think we talked a lot about Black Lives Matter — not like it’s a competition, I don’t want it to be framed that way. It’s all important, and it’s not like either that or this, but when I sent the email to the staff and the families, I definitely was like, we don’t explicitly speak about the Asian American experience enough and we should.”

Learning from home full time, Joyce and Amanda said they have not experienced any bullying or racist comments since schools closed last spring. But that doesn’t mean they shouldn’t be talking about it.

“I feel like if we brought those topics up, maybe we can learn to understand each other, develop more of a compassion and love towards each other to ultimately have some sort of peace,” Joyce said.

This article was originally posted on They were targets of racist remarks. Now, these NYC students want to talk about Asian American history — and hate.