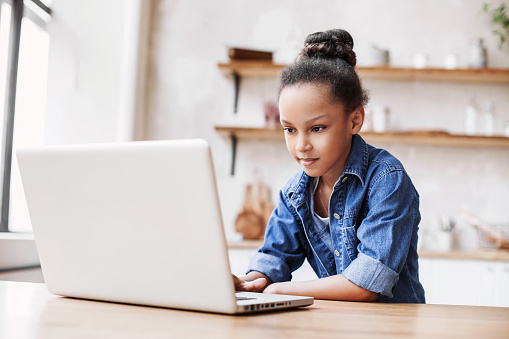 After nearly a year of closed schools and several stops and starts, Chicago reopened classrooms to all but its high schoolers. Like many students across the country’s third largest school district, fourth graders Maya, Zamara, Tennille, and Alexander were roiled by the changes.

Despite living in different areas of Chicago and attending different schools, these fourth graders have something in common: Their foundational third grade year was disrupted twice, first by an 11-day teachers strike in the fall of 2019 and then by the abrupt school closures at the start of the pandemic last spring.

Older and more independent, they’ve encountered more complicated academic material at school and had to manage complex emotions in a year marked by protracted remote learning. With their parents more hands off, they’ve struggled to stay organized, keep up with assignments, and combat boredom and loneliness.

Zamara (pictured above), who continued learning from home when school buildings reopened, found the first week of hybrid learning in Chicago difficult. The first thing she noticed as other students returned to the classroom was that her in-person teacher had additional demands on her time.

She signed on to her math and science class at 9 a.m. that first week as usual but, instead of seeing her teacher, she saw an away message. The teacher was bringing the in-person students into the classroom.

“I don’t think it’s fair,” said Zamara, who likes to sing and draw in her free time. “She could have just said good morning in the chat so we could all see it and be happy for it.”

From the outside, the change seems small. But for students who’ve spent the past year learning from home, even little shifts in their routines can feel like earthquakes.

The first days were full of stops and starts. “It’s very challenging at the moment. The teacher is taking time to figure out what to do in the classroom,” said her mother, Rousemary Vega, thinking of the weeks ahead. “There was a lot of stopping because they had to continually tell one of the students to put her mask back on.”

Zamara’s remote schedule changed, too, to accommodate the in-person learners. She will take several straight weeks of music class to minimize how much in-person learners move between classrooms. She will have twice as much solo learning time on Wednesdays, the day the district has set aside for both teacher planning and deep cleaning of classrooms. As a result, she will have a much shorter lunch, which had been a key time of rest and enjoyment for Zamara, who struggles to sit at the computer for hours at a time.

Vega, a longtime education activist, is disappointed about what she sees as a shift in attention to in-person students. It underscores for her how many Chicago families have gotten short shrift during pandemic schooling. That’s part of the reason Vega’s family participated in a sickout on the first day of hybrid learning last week.

Still, Vega said her daughter has learned new ways to communicate with her teachers, and is more confident speaking up in class. The demands on Vega and her husband, both of whom are able to do their jobs partially from home, continue to be heavy.

At the end of the week, hybrid students reverted to remote learning, and Zamara saw the difference in her teacher’s attention. “That felt better.”

“There are windshields on our desks!” Tennille said, when asked to describe the most striking detail of her return to school. For her, going back to the classroom after a year of loneliness was both comfortingly familiar and strange.

She had been thrilled to see some classmates, but said it was hard to communicate at times through masks and plastic guards in classrooms and the cafeteria. “With a mask on, and those guards, it’s hard to hear.”

Still, Tennille’s joy validated Tara White’s decision to send her three children back to classrooms. The decision — and knowing that she was among the minority of parents at Burnside sending children back into the building — left her feeling like “an outsider sometimes,” she said, in PTA groups, school council meetings, and in conversations with other families. “I’d hear comments like, ‘I’m tired of my kids, too, but I’m not going to send them into an unsafe environment because I’m frustrated.’”

Tennille, her bright, talkative fourth grader, had weathered the year academically — but she was lonely. Tennille’s sixth grade brother, who has special needs and is nonverbal, was experiencing setback after setback, and her first grade sister was struggling with phonics after a truncated kindergarten year.

Schedule changes put the family’s initial plans in flux. Because so few children had signed up to return, her sister could go back in-person four days a week, while Tennille’s hybrid schedule only allowed her two days of in-person learning. That brought another adjustment to White’s work schedule as a federal employee. “Last minute schedule changes — that’s one thing CPS has been terrible about,” said White.

But by the end of the first week, the excitement in the house outweighed the frustration. Tennille described the new reality of school: More computer time than she’d anticipated — with one teacher who had an accommodation to teach remotely — and a different approach to lessons spurred on by the reality of many remote classmates. Most memorable so far had been origami taught through a combo of videos and hands-on instruction. “We watched how to do origami paper folding on this big (computer) monitor, and then we had to make it from our seats.”

The week ended with the family encouraged by the decision to return, although White lamented that only 41 students had appeared to return in-person to Burnside on the first week (numbers put the in-person learners higher, but many schools reported drop offs).

But at same time, her daughter is getting more one-to-one teaching. “As a mom, part of the reason to send her back is because I felt like she was missing out on those social interactions, so I hoped there might be more students there. Before some of those classrooms were entirely too large. I’m torn on that.”

White said she planned to quietly encourage some other parents who might be weighing a fourth quarter return. “If they are on the fence, I say go with it.”

Maya, 9
Galileo Scholastic Academy of Math & Science, Near West Side

On the first day of in-person instruction, Maya stayed home.

Her mother, Michelle Bautista, decided to join a protest in which families kept their children home on the first day of hybrid learning for kindergarten to fifth grade students, in an effort to show district leaders that parents were unhappy with communication from Chicago Public Schools this year. (Chicago has not yet released attendance figures, so it’s unclear how many families took part in the protest.)

The next day, Maya went to school, but it was her day to work remotely while some of her classmates returned to the building. At the Bautista home, the start of the school day begins with a bell, really a cell phone alarm, that gives Maya and her kindergartner brother a five minute warning before they’re expected to be in their chairs and ready for school.

The first thing Maya noticed that day was which of her classmates had their camera on or off, and whether they were in school or not. “I did see lots of kids in the school with their camera off,” she said.

Maya works at a desk on the ground floor of her family’s house in the Tri-Taylor neighborhood. Her father, Miguel, and younger brother, work at side-by-side desks in the basement. Her brother, like many kids his age, needs help switching between group and one-on-one lessons. For him, it was a more difficult week, which included multiple schedule changes, less small group time, and difficulty hearing in-person teachers.

“He was the only kid who was remote,” Bautista said, adding that the frustration of the week brought her to tears. “If you are learning to read you need to hear her [the teacher] say d-o-g.”

Maya is expected to work more independently than her younger brother. Her parents encourage small reading or play breaks between lessons, a balance that has helped Maya become comfortable entertaining herself. Still, with Wednesdays now becoming a short day under Chicago’s new hybrid schooling model, she found herself with mixed feelings.

“I’ve already drawed and played and there is nothing on the computer and I feel bored,” she said. “If I was in school I feel like I wouldn’t.”

When Chicago began the school year remotely, Jessica Doll, who works in the marketing department for a real estate firm, knew it would be a struggle to supervise learning for two active boys and work. She pulled her prekindergartner out of public school and put him in full-time daycare. She and her husband did their best to help her fourth grader, Alexander, keep up with his assignments. (Alexander is a pseudonym; Doll asked Chalkbeat to use a middle name to protect her son’s privacy.)

But at home, he resisted turning on the camera for remote classes, and he fell behind. “When we had our first parent teacher conference of the year, the teacher said ‘I don’t know what he looks like.’ That was hard to hear,” recalls Doll.

Months later, she felt confident sending Alexander back to school as classrooms reopened. But she had questions: What would first-day-of-school anxiety look like in March? Could he really wear a mask all day? Would he spend much of his day sitting in front of a computer in his classroom?

Alexander was assigned in-person learning on Thursdays and Fridays, which means that the first three days of the week he’s still at home. The first day back in the classroom, Doll waited at the pick-up spot. How would the day go? Would it have been worth it?

“My son came out, and—” she drew a breath, “Honestly, I haven’t seen him that happy in a long time.”

The best part? Racing his friends on the first day of recess and playing soccer the second day. The weirdest part? Desks so far apart, he said. As for his mother’s concerns about screen time in the classroom — yes, there is still a lot of time on the Chromebook, but he says it’s better than doing worksheets. “We used to have to do it on paper; now you don’t have to,” he added.

The transition has come with an unexpected adjustment: The emotional toggle between remote days and in-person learning. Having experienced the excitement of school, returning to remote learning at the start of the week is tough. “It feels hard to focus,” Alexander said. “At school you feel more comfortable because other students are working beside you.”