Home » Top five reasons why the Constitution should be revered 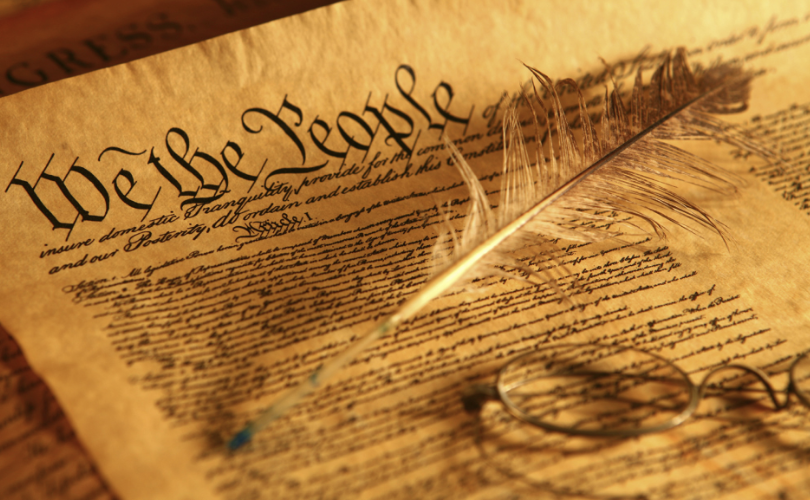 Top five reasons why the Constitution should be revered

The United States Constitution is not some musty piece of parchment, written in barely legible calligraphy and irrelevant to our lives. To the contrary, it is a governing document of profound significance that all Americans should revere. If you don’t believe that, here are five reasons why you should change your mind.

1). A Written Constitution. Nearly all scholars agree that the Constitution was the first written document that established a major nation’s government. For thousands of years, mankind had been ruled by some combination of fear, force, custom, and tradition. Having a written document that laid out the powers of government and the duties of the representatives of “We the People” was a huge leap forward, both for the rule of law – that is, the idea that the law governs rather than the personal desires of those in power – and the argument that mankind has the capacity to participate in self-government

2). Approved by the People. Until 1788, as far as we know, no major country in the course of human history put its form of government up to a vote of the people. The people in each state voted to send delegates to the Constitutional Convention of 1787, where a new governing document was created through robust debate. Unless the ratifying convention of any respective state approved the Constitution, it would not be adopted, another amazing advancement. We literally created a new social compact for the country that was agreed to by the people of each state.

3). Separation of Powers. Although England and ancient Rome had some pretense of separation of powers, it was muddled and often subverted. Until the Constitution, no major central government in world history firmly divided the three major functions of government into co-equal, separate branches. By dividing power between the legislative (Congress), executive (President), and judicial (Supreme Court) branches, the Constitution protects liberty by making it difficult for one person or group from taking complete control of the federal government.

4). Checks and Balances. Hand in glove with separation of powers, by giving each branch the ability to check the other branches, the Constitution better protects liberty. It requires that the three branches act together to enact policy and ensure that it does not violate the Constitution’s text. For example, the president can veto legislation passed by Congress, but Congress can override that veto with a two-thirds vote. The president is the commander in chief of the military, but only Congress can fund it and declare war. Even if Congress passes legislation and the president signs it into law, if it violates the Constitution, the Supreme Court must set that law aside. The president nominates judges, but the Senate must approve nominees. Again, liberty is protected by limiting the power of any particular branch of government.

5). Enumerated Powers. Most governments in human history presume that the government is all powerful, and then carves out certain restrictions where it cannot act. The Constitution does exactly the opposite. Unless the Constitution specifically enumerates – that is, lists – powers where the federal government has the authority to act, it cannot do so. By substantially limiting the reach of federal power, the doctrine of enumerated powers safeguards the people’s liberties.

There you have it, a list of top five reasons why the Constitution is vitally important today and should be revered. Whether or not we will maintain our Constitution, freedoms, and liberties is entirely up to you. Accept the challenge!