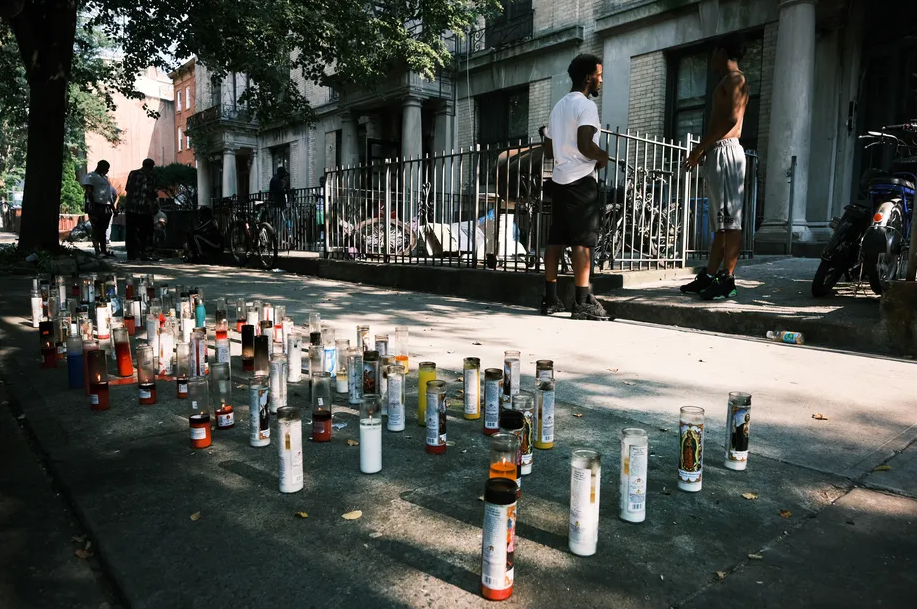 By Patrick Wall .Chalkbeat on September 1, 2021

Khalif Harrington was set to begin his senior year at Newark’s West Side High School next week. Instead, the 17-year-old was gunned down Monday evening not far from his school and died shortly after.

The shooting came just one day after an 8-year-old boy, Jahmeer Allen, died from a self-inflicted gunshot wound at his relative’s house in Newark, according to the Essex County Prosecutor’s Office. Prosecutors allege that the boy’s 18-year-old uncle left the gun unattended in the house.

With Newark classrooms set to reopen next week, the back-to-back deaths offered a grim reminder of the threat many students face from gun violence outside of school — a public-health crisis that predated the coronavirus pandemic and has recently intensified. From Jan. 1 to Aug. 22, shootings were up 23% in Newark compared to the same period the previous year, and killings had risen 25%.

“We cannot tolerate arbitrary violence and wanton crime in our community,” Mayor Ras Baraka said in a statement Tuesday, the second day of the city’s first-ever “Peace Week” aimed at reducing violence. “We will not allow this city — as we have come such a long way — to deteriorate into a city of lawlessness.”

The pandemic has unleashed a nationwide wave of gun violence, with more shooting deaths in 2020 than any year in two decades. Newark saw 35 killings and 150 shootings this year through Aug. 22, both up from the same period in 2020, according to police data. Overall crime is down slightly.

Experts have proposed different reasons for the spike in violence, including a surge in gun sales and heightened tensions due to unemployment and other pandemic woes. At an event Tuesday with Baraka, Newark Public Safety Director Brian O’Hara said another factor fueling the violence has been Newark’s prolonged school closures, which have kept most students out of classrooms for nearly 18 months. For many young people, that has meant less structure and supervision.

But it is the steady stream of illegal firearms into the city that can make conflicts between young people so dangerous — and put children at risk of accidental shootings inside their homes, O’Hara added.

Khalif Harrington had spent Monday evening at “Lights On,” the celebrated after-hours program at West Side High School that offers students dinner, games, and a safe social space. Police officers provided security at the school, but Harrington left shortly after 9 p.m., according to a school employee.

“On the way home, this kid ran into trouble,” Baraka said Tuesday.

Police found Harrington with a gunshot wound near South Orange Avenue and Ashland Street, where he was pronounced dead at 9:46 p.m., the prosecutor’s office said. An investigation is ongoing, and no arrests have been made.

Harrington was good-natured and playful, said Leonard Ellis, who runs a community-based organization that Harrington interacted with years ago.

“He was a kid that always wanted to joke and play and make people laugh,” said Ellis, whose nonprofit, Eyes Wide Open Hope, provides Newark youth and families with food, clothing, and job help.

Jarrod Lawson, another Newark teen whom Ellis said had participated in his group’s programs, was shot to death this spring.

“It’s hard when you see the potential in them and the innocence,” Ellis said. “Regardless of what the streets try to make them out to be, I know another side.”

Many other shooting victims in Newark this year have also been young people.

Last month, two teenage boys were wounded in a shooting. In June, a 9-year-old girl was shot in the leg. That same month, a 16-year-old boy was fatally shot in broad daylight in Newark’s South Ward, forcing a nearby school to go into lockdown. And in separate incidents earlier this year, two 2-year-old girls were injured by gunfire.

A young person does not have to be struck by a bullet to be exposed to gun violence. They might know a shooting victim, witness a shooting, or live in a neighborhood rife with shootings. According to researchers, such exposure can leave lasting emotional scars, including anger, post-traumatic stress, and desensitization to violence.

“If you see it happen over and over again, you become numb,” said Aqeela Sherrills, director of the Newark Community Street Team, a group founded by Mayor Baraka that uses conflict mediation and other interventions to curb violence. “It’s vicarious trauma.”

Another Baraka initiative, called the Brick City Peace Collective, works to help ease the trauma caused by violence. The group’s manager is Dawn Haynes, president of the Newark school board.

The Newark school district has sought to offer more support to students coping with grief and trauma in recent years. Now, as many students endure hardships during the pandemic, such as food insecurity or the death of a loved one, the district is planning to ramp up services, Superintendent Roger León said Tuesday during a staff convocation. The initiatives include increased mental health counseling, trained crisis-response teams, and a partnership with the Newark police department to alert the district when a student has experienced a traumatic event.

On Tuesday, León paused his presentation to district staffers to mourn the loss this week of Khalif Harrington and Jahmeer Allen. One way Newark’s educators can honor those fallen young people, León suggested, is to help their peers work toward a better future.

“Our job in school is to make tomorrow be as bright and as beautiful as humanly possible,” he said.