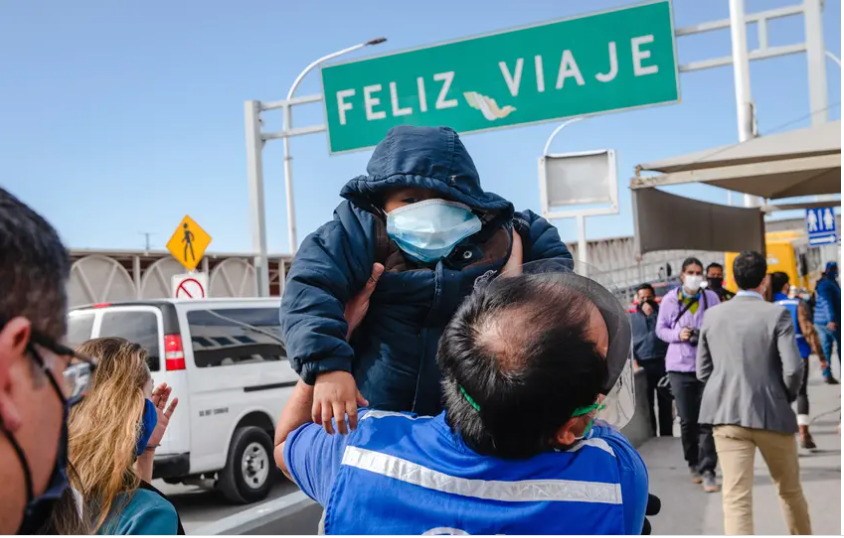 Two years after “remain in Mexico” policy began, migrants allowed to pursue their asylum claims in the U.S.

“Two years after “remain in Mexico” policy began, migrants allowed to pursue their asylum claims in the U.S.” was first published by The Texas Tribune, a nonprofit, nonpartisan media organization that informs Texans — and engages with them — about public policy, politics, government and statewide issues.

CIUDAD JUAREZ — Nearly two years after the start of a Trump-era policy that forced tens of thousands of asylum seekers to wait in Mexico for their immigration hearings, a small group of migrants were allowed into El Paso Friday afternoon to pursue their asylum claims in American courtrooms.

The end of the Migrant Protection Protocols, also known as “remain in Mexico” in this stretch of the border comes a day after a small group of migrants were allowed into Texas from the Mexican city of Matamoros, across from Brownsville, on Thursday.

More than 70,000 migrants, mostly from Cuba and Central America, have been put into the program since its inception in late 2018 in California. The policy expanded to Texas in early 2019 and placed more than 20,000 asylum seekers in Ciudad Juárez. About 25,000 remain in the program.

“The Trump administration’s Remain in Mexico policy was cruel, un-American, and designed to endanger vulnerable populations by sending legal asylum seekers into another country, where they fell victim to extortion, kidnapping, and rape while awaiting their hearings,” U.S. Rep. Veronica Escobar, D-El Paso, said in a statement Friday morning before the migrants were processed at the U.S. port of entry.

Ruben Garcia, the director of the El Paso-based Annunciation House shelter network, said Thursday that about 25 migrants will be processed daily on this part of the border each week, and that number could increase to 50 a day depending on how the initial rollout goes.

Most of the migrants will only be on the border for a day or two before moving on to cities farther north where sponsors or family members are waiting to take them in while their asylum cases are pending.

The end of MPP is a part of President Joe Biden’s early, massive overhaul of Trump’s immigration programs. Biden has also ordered a review of policies within Immigration and Customs Enforcement, including instructions that the agency concentrate its removal efforts on migrants convicted of crimes and those who pose a threat to national security.

Biden has also presented to Congress an immigration reform bill that includes a pathway to citizenship for an estimated 11 million undocumented immigrants currently in the United States.

But Biden’s fast approach to dismantling his predecessor’s policies has also been blamed for a recent uptick in unauthorized migrant crossings on the southwest border.

Enrique Valenzuela, the director of Ciudad Juárez’s Centro de Atención a Migrantes, a migrant transition facility operated by the Chihuahua state government, urged asylum seekers intent on traveling through Mexico to practice patience, since only migrants that have been in the MPP program are being allowed into the United States.

“This isn’t the time to try to enter the United States because the door isn’t wide open,” he said.

This article was originally published on Two years after “remain in Mexico” policy began, migrants allowed to pursue their asylum claims in the U.S.