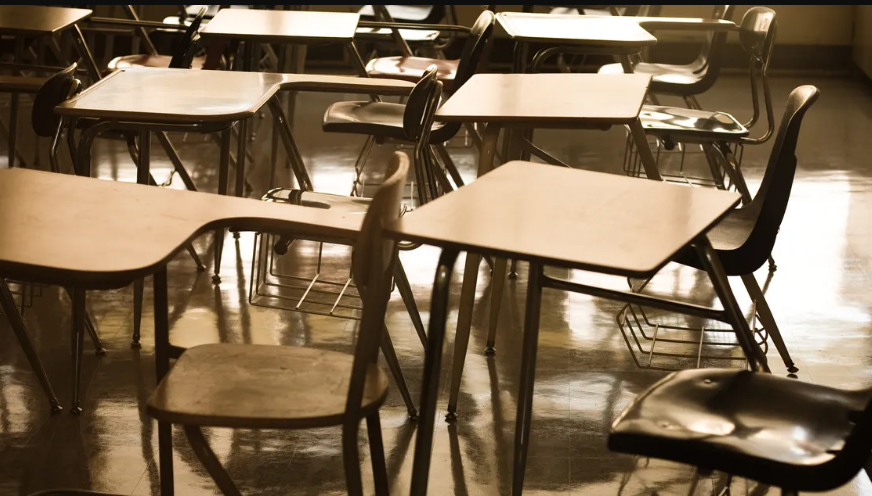 Among teachers, there is heavy nostalgia for the physical space that is school.

Even after I started teaching, I knew I didn’t want to be a teacher. My issue was not a fear of children or public speaking. It was the classroom space that made me uneasy, nervous, uncomfortable.

A quarter of the way through my senior year of college, I started assistant-teaching a creative writing workshop in Brunswick, Maine. We would go every Tuesday for an hour and a half to an alternative high school and teach 10th graders in a seminar about personal narratives. At the end, we promised, they would have their own space in a printed volume, a chapter of a chapbook made up just of the stories generated in that classroom.

But this classroom was not a welcoming space; it was a repurposed lobby, doorless, squeezed between the school’s bathrooms and the school’s auditorium, which was not used as an auditorium anymore because the lights on one half of the room did not work and the lights on the other half flickered on and off on their own schedule. In one corner of the room lurked the school’s busiest printer.  In another corner, a concrete staircase that led directly into the ceiling. Our classroom-lobby did not actually have a door, just a doorway veiled with paper streamers. Sometimes a corgi would wander into our room, trailed by a leash. And, as the students often pointed out, the Wi-Fi sucked. It was not the ideal spot for learning, not the ideal spot for student engagement, not the ideal spot to keep one student’s girlfriend from drifting in at random times and wedging herself into his chair (eventually, she just joined the class).

But we made do! The half of the auditorium that sometimes had light became space for writers who wanted to be left alone; the stairs to nowhere became space for receiving feedback; the printer area and wherever the corgi happened to be became space for taking a break. And as the seminar wore on, the little spatial discomforts I carried into the room —  stopped being quite so heavy.

And I ended up loving it.

And I decided to become a teacher.

And I accepted a spot in a graduate school program.

And I made plans to come to Washington, D.C.

And one night, I watched the news come in that Tom Hanks and Rudy Gobert had both tested positive for the coronavirus, and the classroom space I’d anticipated became a desk harvested from the curb and squeezed into my rented bedroom.

So, now many of us have been teaching in the virtual space for over a year. I have yet to talk to a teacher who does not hold some heavy nostalgia for the physical classroom. The Zoom room is not quite the same. Not academically, not emotionally, and certainly not socially. As I wait for an email with Fall 2021 in-person plans to waddle into my inbox like some unloosed, messy, joyful puppy, I find myself asking:

In chewing on that question, one priority sticks out: We need to make the physical school space feel like a livable space, not just a centralized list of activities and lapsed standards and new rules and deficits and concerns and untaken standardized tests to be crammed for and baroque surface-washing protocols and on and on. Health and safety are top priorities, but re-establishing school as a truly shared space should be next on the list.

I think that one of the things our students hate most about being virtual is that there is no space nor time to breathe together. There is no corner with the printer. There are no whispered conversations in the dark half of the auditorium. One of my sections this year has been particularly difficult to engage. A few weeks ago, we took the first half of a class period to redraft and reinvigorate our class social contract. And the first thing they asked for was space for virtual school to be a little less educational. They asked for a few minutes a week to be concerned not with objectives and summatives and making up lost work. They asked to collaborate in small groups. They asked for the space to talk to one another as people, not just as classmates. Since then, I have noticed that the best periods sometimes aren’t the ones where we get started right on time.

Instead, the productive, engaging classes might be when students start by talking about their weekends or their favorite movies or what they’re reading right now. I chat with a student about volcanism, and 15 minutes into class, we set goals privately in the chat about what he’ll be sure to complete independently after class. I draw a diagram explaining jet streams, and near the end of class, I don’t have to ask quite as many times as I usually do for volunteers to share answers.

There’s no way to prove a relationship between making space for sixth graders to be, briefly, 11-year-olds during class and whether or not they turn in their exit ticket on a given day. But in the little time I’ve had with them, I’ve found that providing that space does not hurt. And I believe that the restoration of that mental, social, and emotional space within the physical space of school will be key to getting our kids back where they need to be. The imperfect, uncontrolled space is necessary; sometimes, to write a personal narrative, you need stairs to nowhere. You need disruption. You need a glimpse of an unleashed dog.