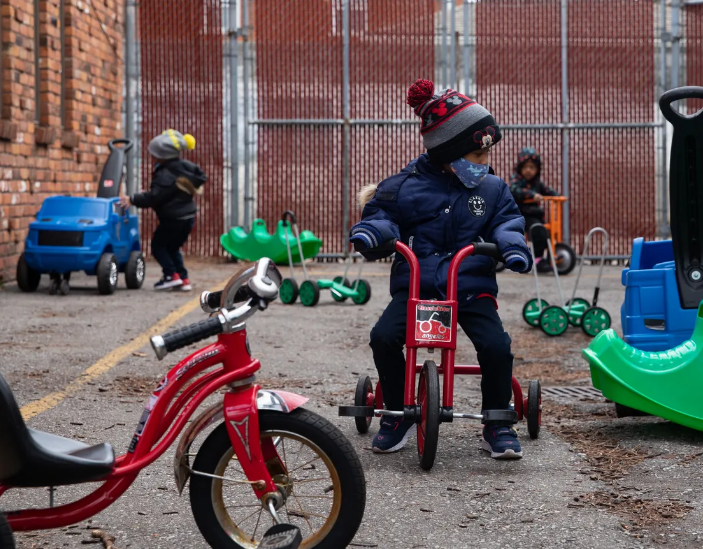 ‘Why are you adding this stress on us?’ Michigan cuts star ratings and money for child care providers during the pandemic.

Linda Byrd had managed to keep her child care center running through nearly one year of the coronavirus pandemic when her state funding started to come up short.

The center, ASA Higher Learning Preparatory in Detroit, enrolls mostly children from low-income families, so it relies on the money to pay the bills. The payments had declined, officials explained when she called, because the center’s rating had dropped from three stars out of five to two.

This back-and-forth played out repeatedly across Michigan in recent months. The state handed out fewer ratings overall — and fewer high ratings — to child care providers over the last year.

Byrd and other providers were outraged that they didn’t get a reprieve during the pandemic, even as the state sought to pause accountability systems for K-12 schools.

“My bills are not going to change because of this rating, but my money did,” said Shirley Wright, director of Little Scholars child care centers in Detroit, whose star rating dropped from a four to a three during the pandemic.

She views the decision to continue the star rating process as further proof that the state treats child care providers like babysitters: “If education starts at birth, why do we treat early childhood education like it’s not education?”

Money is a perpetual issue for centers like Wright’s and Byrd’s, which rely on state subsidies for students from low-income families. Subsidy payments don’t cover costs, and providers are forced to ask struggling parents to make up the difference. Teachers make such low wages that they often qualify for the same poverty programs as the students they teach. Teacher turnover is severe.

The star system was designed as a bonus for centers that hired highly qualified staff — not as a lifeline for strapped providers, said Denise Smith, implementation director for Hope Starts Here, an early childhood initiative in Detroit.

“Everyone is starting at the same abysmal rate” paid by the state, Smith said. “If we change that, then those bumps [from the stars] will be a bonus. Right now providers are looking at it as a penalty.”

Whether or not providers participate in the star system is up to them. Under normal circumstances, providers apply for a rating every two years, a process that involves submitting dozens of documents to the state about their employees and curriculum. Providers who told Chalkbeat they lost stars in the last year said they failed to upload the correct documents or, in one case, simply forgot to renew their rating.

The steps are separate from the licensing process, which ensures that providers meet basic safety standards. While it is voluntary, providers in low-income communities who rely on meager state subsidies often feel they can’t afford not to participate.

“We’re working in a pandemic,” Byrd said. “The pressure of trying to stay alive and keep the children safe has been too much. The rigidity of [the star system] has to be relaxed.”

During the pandemic, the state handed out 7% fewer ratings of three, four, and five stars to child care providers than it did the year before. Participation in the program also dropped. From March 2020 to 2021, the number of rated programs fell by nearly 10%. The declines were the largest in four years of rating data reviewed by Chalkbeat.

Dawne Bell, CEO of the Early Childhood Investment Corp., a nonprofit contracted by the state to run the rating system, said it’s not surprising that fewer providers participated in the rating system this year given the other challenges they were facing.

“We absolutely understand that if you’re in survival mode, this is probably not the highest priority right now,” she said.

The rating process was paused last March when much of the state shut down to slow the spread of COVID-19. It resumed in July when child care providers began to reopen for face-to-face instruction, becoming some of the first educators in the state to do so.

Asked why the star ratings weren’t paused for longer despite providers’ objections, a spokesman for the Michigan Department of Education said the ratings “resumed at this time because executive orders allowed for child-care programs to be open and serving children and families.”

The state has used more than $209 million in federal funds to support child care providers during the pandemic, the spokesman noted. Indeed, experts say that the money helped keep more centers open than many predicted at the outset of the pandemic.

Wright’s two centers on the west side of Detroit enroll about 80 students, most of them from low-income families. The centers are private, but they rely financially on a state program that covers tuition for families of four with annual incomes below $34,000.

In Michigan, tens of thousands of children from low-income families are enrolled in free, publicly funded preschool programs such as Head Start. But those programs have limited space, and centers like Wright’s are the most common option for families in low-income communities.

Gov. Gretchen Whitmer wants to increase the rate 10%, as well as making other changes to the child care subsidy program that providers have long sought.  Her budget proposals likely won’t get far in the Republican-controlled state legislature, which refused to negotiate with Whitmer over the budget last year. But the huge infusion of federal coronavirus aid that will soon arrive in Michigan’s child care system could achieve some of the same goals.

The state also is working to overhaul the Great Start to Quality program, which generates star ratings of child care centers.

Bell said that child care providers can call to ask for help with their rating, or to request an extension.

But too few providers realized how much flexibility they had, Smith said. “Could it have been communicated better and more effectively and louder by the state? Yes.”

Denise Lomax, owner of Child Star Development Center in Detroit, said she didn’t realize an extension was available. When the center’s star rating dropped from a four to a three during the pandemic, she immediately called the state to complain.

“Why are you adding this stress on us?” she recalled saying to the official over the phone. “We’re trying to stay safe. We’re getting up every day nervous to come to work, not knowing what’s going to happen. Then you add more stress to us? Then you say you’re going to take money from us?”

Within days, the state changed the rating to a four again. Other providers, including Byrd and Wright, were ultimately able to adjust their rating applications and return to the same star rating they had before the pandemic.

Recouping the lost stars took longer for Byrd — she said a month passed as she resubmitted documents to the state and waited for a response.

She said the delay will make it even harder to pay her teachers. In Michigan, a qualified early childhood educator can make less than $30,000 a year. By the time Byrd’s center was returned to a three-star rating, she estimates the center lost more than $5,000.

This article was originally posted on ‘Why are you adding this stress on us?’ Michigan cuts star ratings and money for child care providers during the pandemic.