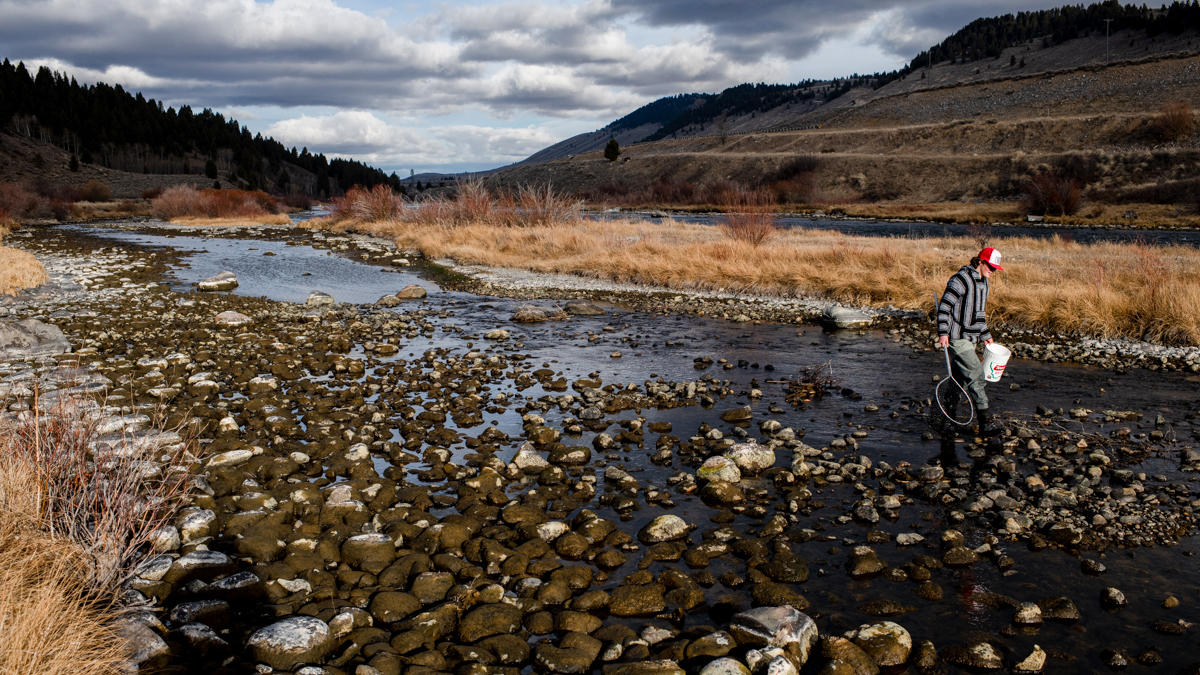 NorthWestern Energy says the company is working “around the clock” to repair a Hebgen Dam malfunction that left trout stranded in a rapidly dewatered upper Madison River near West Yellowstone. Fly fishers are concerned about the prospect of lasting impacts to one of the state’s most popular fisheries, particularly in the stretch immediately below the dam.

The issue started early Tuesday morning when flows below Hebgen Dam rapidly dropped from about 650 cubic feet per second to less than 200 cfs — just half the volume of the previous record low for the date based on 83 years of data.

NorthWestern Energy said the drop in flow is due to a failed gate component that’s part of the 106-year-old dam’s outflow structure. Flows rose slightly when NorthWestern Energy began releasing water over the dam’s spillway yesterday afternoon, but the boost is minimal due to the low reservoir level. The company said in a Wednesday afternoon press conference that the Anaconda Foundry Fabrication Company has fabricated a replacement component for the gate that was en route to the dam as of 4:30 p.m. Jeremy Clotfelter, NorthWestern Energy’s Director of Hydro Operations, said the replacement part could be installed as early as Wednesday evening. As of Wednesday afternoon, the river was running at 248 cfs. The mean flow for December is 968 cfs.

“There are no issues or risks to the intake or dam structure, but the gate malfunction interferes with NorthWestern Energy’s ability to control river flow,” the dam-operating utility said in a Wednesday morning press release. “NorthWestern Energy hydro engineers and personnel have been working around the clock to develop a repair plan, and are on-site this morning to restore gate functionality and river flows to the Madison River as quickly as possible, safely.”

Montana Fish and Wildlife Commissioner Pat Byorth said he expects impacts from the severely reduced flow will extend beyond the immediate loss of fish that have been stranded in side channels and shallow pools, which have limited oxygen to sustain their survival. Byorth, who also works on streamflow initiatives and water rights procurement for Trout Unlimited, said he expects the low flows will also threaten the viability of brown and brook trout eggs. Both species spawn in the fall and tend to select shallow riffles for their spawning nests, or redds.

“Some of those redds will be exposed and likely freeze, or get trampled, so we’ll have some recruitment loss for next year,” Byorth said. “We can expect some population suppression.”

Fishing Outfitters Association of Montana Executive Director Mike Bias said the dam malfunction has come at a particularly bad time for the river.

“We’re coming off of a super bad drought year, we just reviewed [fish] population numbers for 2021 and they’re not great … and then this happens,” he said. “Everybody’s concerned.”

The ecosystem’s resilience has already been challenged by low flows attributable to drought. And Montana Fish, Wildlife and Parks has been trying to understand what’s driving population declines for the Madison River’s brown trout over the past two years, Byorth said. According to the most recent population count, the number of brown trout on the stretch of river below Hebgen Dam was down 15% from 2019. Bias said the upper Madison has historically been a resilient river, but he’s worried about how a sustained loss of flow will impact the resource, which is a key driver of Madison County’s economy.

According to a report produced by the University of Montana’s Institute for Tourism and Recreation Research, nonresident spending on outfitter and guide services in Madison County  exceeded $23 million in 2019. Nonresident travel expenditures generally accounted for more than $51 million in direct economic impact for the county.

Bias said the Madison River leads the state’s waterways in terms of recreational use and economic impact, which makes the situation all the more impactful.

“Not that you want this to happen on any other river, but, boy, it shouldn’t happen here. … It’s arguably the best [fishery] in the state, and because of that, we’re probably one of the best in the country. I’ve had people from all over the country come to fish the Madison.”

Bias is part of the Madison River Work Group, a 12-member body that’s been trying to chart a path for the river amid rising recreation pressure and conservation concerns. An earlier effort to re-think management of different user groups — resident anglers, nonresident anglers, walk-and-wade fishermen, outfitted anglers fishing from boats, floaters, etc. — disbanded in 2019 after members reached an impasse on a new management framework.

Byorth said he hopes this week’s dewatering will compel the work group to take a more fulsome look at how recreation pressure is influencing ecosystem health and fish populations.

Bias said he expects most of the management conversation to be taken up by FWP rather than the working group. Yesterday, at the direction of the Fish and Wildlife Commission, FWP instituted an emergency fishing closure on the upper Madison “until the issue at the dam is resolved and flows are fully restored to the river.”

FWP has also been working with volunteers to help relocate stranded fish to deeper water. FWP spokesperson Greg Lemon said the department organized volunteers out of Ennis this morning and asked people interested in helping to go to fishing access sites along the upper Madison and look for an FWP employee for direction.

“One of the things we don’t really want is a free-for-all along the river,” he said. “It would be good to make sure we’re coordinated so we can protect the resources.”

As the situation is developing, the agency’s direction has changed several times over the last 24 hours, Bias said. Initially, there was concern about overeager volunteers trampling redds, but the department has since deemed freezing temperatures a greater threat to the nests than foot traffic.

Bias said he understands about 150 people turned up in Ennis today to help relocate stranded fish.

“What impresses me are the number of people who are out here, [and not just] employees of fly-fishing shops,” said Craig Mathews, a conservationist who authored “Fly-Fishing the Madison” and founded Blue Ribbon Flies in West Yellowstone with his wife, Jackie.

Mathews said the resource impact isn’t as bad as he anticipated along the stretch of river he’s been walking, which is just upstream from where the West Fork of the Madison joins the river’s main stem.

“We’ve found several areas, little side channels, that have lots of small probably rainbow trout fry, but there’s enough water to sustain them right now. As long as it doesn’t get too cold, we’re probably going to be in good shape,” he said, adding that he’s heard that the situation is more serious closer to the dam.

Bias said he’s been encouraged to learn that some of the valley’s irrigators have closed their headgates to boost flows. He added that he also hopes this event will encourage NorthWestern energy to build more redundancy into Hebgen Dam to prevent similar issues in the future.

Nonprofit groups Upper Missouri Waterkeeper and Montana Environmental Information Center issued a joint press release Wednesday afternoon calling for Gov. Greg Gianforte, FWP and the state Department of Environmental Quality to launch an inquiry into the cause of the malfunction and hold NorthWestern Energy accountable for resource damage.

“Montana Fish, Wildlife & Parks and the Montana Department of Environmental Quality have a legal responsibility to ensure the permittee, NorthWestern Energy, complies with all conditions of its [Federal Energy Regulatory Commission] license, No.P-2188 for the Missouri Madison Project, including protecting water quality, aquatic life, and adequate flows,” the release says. “Losing significant dam flows during spawning season and compromising the health of one of Montana’s most valuable fisheries constitute violations of NorthWestern Energy’s hydropower license that must be remedied by the Gianforte Administration and state natural resource agencies.”

Clotfelter, with NorthWestern Energy, said the minimum flow permitted by its FERC license is 150 cfs.

The earth-filled dam was built in 1915 and underwent a $450 million repair in 2017, which included replacement of the outflow pipe.