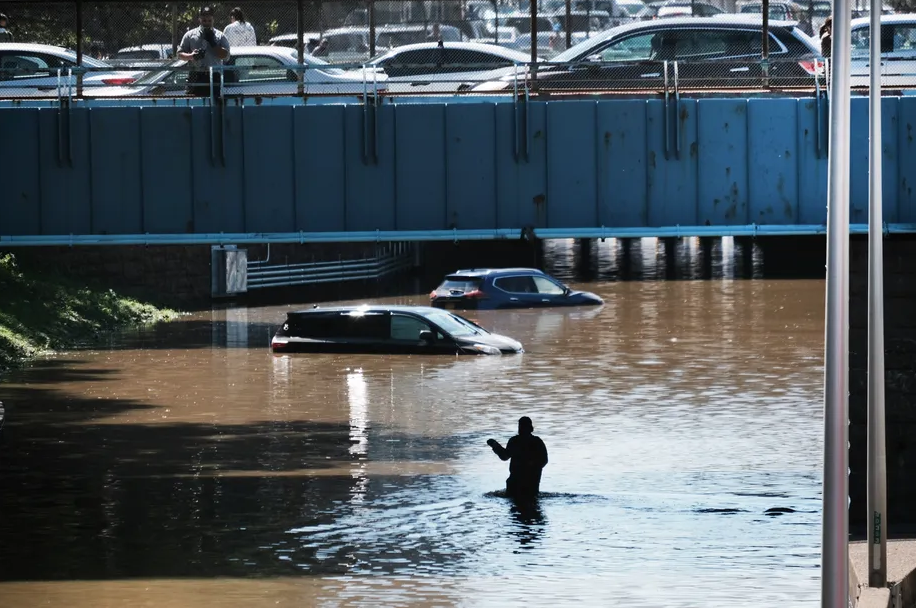 By Dale Mezzacappa .Chalkbeat on September 3, 2021

Despite the havoc wreaked by the tail end of Hurricane Ida, Philadelphia’s school district opened Thursday, with notice of a two-hour delay for some schools that came so late some parents already had dropped off their children.

On Friday, the district plans to go all-virtual in acknowledgement that conditions aren’t expected to improve. Superintendent William Hite made the decision after a nudge from Mayor Jim Kenney and in the face of outrage from the teachers union and parents.

“The city has shared that road conditions and other impacts from the storm are not expected to improve by tomorrow,” said an afternoon email sent to parents. “Therefore: All district schools will engage in 100% digital learning.”

After last year’s remote learning, all students should have access to laptops, making the pivot to virtual possible. Teachers and other staff members also will work from home Friday. School will reopen for in-person learning Sept. 8 after the observance of Labor Day and Rosh Hashanah.

The heavy rains and winds brought on by Ida sent the city’s two rivers to record high levels, flooded roads and basements, downed some power lines, and shuttered most suburban schools. City officials at a press conference Thursday termed the damage as a “once in a 100 years” event.

District leaders, however, decided to open as usual for its 120,000-plus students. It did not go smoothly.

The teachers union called the decision “irresponsible.” Some parents were furious — communication about the delayed opening went out at 8:45 a.m., after many parents had dropped off their children or were en route to school.

“Y’all should have had a plan, yesterday was a tornado watch. There are children that are sitting out in these yards because parents don’t know that there is a two-hour delay,” said Shakeda Gaines, a parent and president of the Philadelphia Home and School Council. “How dare you had these kids outside like that? It is unacceptable. It is not a game. This is not something that we want to play with.”

“I got no phone calls, nothing,” she said.

Delores Brown, who lives in the Northeast, said the only reason her two children were able to get to school with the changed times is that her family has a car.

Cierra Freeman described an odyssey of closed roads, U-turns and detours to get her daughter from Brewerytown to school in the Northeast, only to discover after arriving 45 minutes late that school wasn’t open yet because of the delay.

“This is horrible,” she said.

At the press conference, Hite said he acted in the face of “an evolving situation,” and the 8:45 a.m. communication “went out later than we would have liked.” The delay affected a small number of schools, he said, those with scheduled opening time of 9 a.m. By that hour, Hite said, officials had a better idea “of what the roads looked like and the difficulties individuals would have getting to and from schools.” Most schools have start times of 7:30 a.m. and 8:15 a.m.

Two elementary schools, James Dobson in low-lying Manayunk and Albert Greenfield in Center City, did close Thursday because of power outages, Hite said. Others had to alter dismissal procedures. The message to close went out to Dobson at 7:06 a.m., about 90 minutes before staff was due to report. Greenfield’s message went out at 7:10 a.m., an hour before staff was due.

Hillary Linardopoulos, a spokesperson for the Philadelphia Federation of Teachers, said in a statement, ”It simply does not make sense that SEPTA, [the city Office of Emergency Management], and other departments were sharing on the ground condition reports that clearly showed that opening schools would be dangerous, and yet the district moved forward.”

Hite said they made the decision to keep most schools open because “we consider ourselves an essential service.” SEPTA also was running normal routes “and in some cases children were already on buses on their way to school.”

In the letter to parents Thursday, Hite apologized “for any inconvenience [the late notice of the delay] may have caused our families. Please know that decisions were made based on the best information available at the time, and plans were in place to support the staff and students who were already en route to schools as well as those with later tiered start times.”

At the press briefing, city officials stressed the seriousness of the storm and its continued effects.

“This is a truly historic event,” said Fire Commissioner Adam Thiel, head of the city’s Office of Emergency Management. His inspectors out in the field “are saying they’ve never seen anything like this…flooding has reached levels we haven’t seen in 100 years.”

Asked for his reaction to Hite’s decision to open schools, Kenney said “hindsight is always 20-20.” He noted that this call is made by the Board of Education and the district’s administration, not by the city. “Everybody seems to be safe,” he added.

But union officials blasted the move.

“We vehemently disagree with the district’s call to keep schools open today,” the PFT said in a statement. The city’s teachers live all over the region, including some in New Jersey and Delaware, and union officials said many teachers had trouble traveling into schools.

City Council member Kendra Brooks and state Rep. Liz Fiedler issued a statement blasting the district’s “mishandling” of the flood response, especially the two-hour delay. “This last-minute decision made by the District is just one example of a pattern of disrespect for our school communities, poor planning, and poor communication with families across the city,” they wrote.

Parents also took to Facebook and Twitter to express their ire about the late notice for the delayed opening.

“Didn’t tell us until 8:38…I was sitting in my car getting ready to pull off AFTER dropping my kids off at school. Somebody def dropped the ball this morning,” wrote one mother.

“This is ridiculous!” wrote another. “This call should’ve been made no later than 5:00 am.”

The storm has apparently also roiled an already tense situation at the Julia R. Masterman Demonstration School, where teachers have been protesting over what they say are unsafe conditions around dangerous loose asbestos. The district is currently replacing the roof on the 90-year-old building.

Due to water damage, the storm caused a ceiling tile in a fourth floor classroom to fall, dropping some dust onto desks, said teacher and protest spokesperson Ethan Tannen. The district said that it has remediated potentially dangerous asbestos in 60 locations at the school, but the teachers and the union’s environmental consultant, Jerry Roseman, contend that officials have not been forthcoming about loose asbestos above ceiling tiles throughout the building.

The classroom was cleaned up and closed for the day. No students were present when it happened, according to the district.

“There was a ceiling tile that fell, and that issue has been inspected and resolved,” Hite said. “That’s why we’re replacing the roof.”