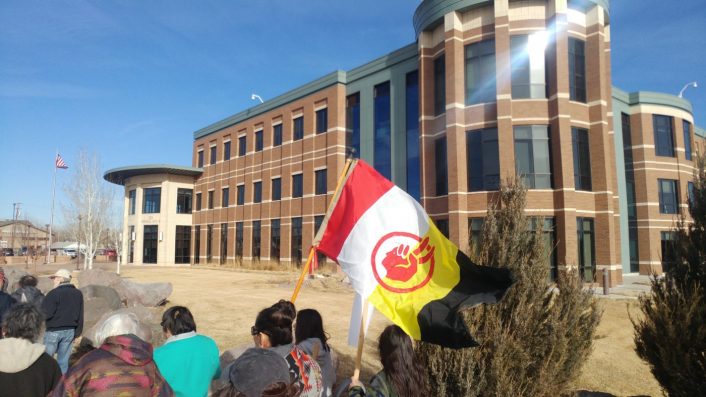 GREAT FALLS — Environmental and indigenous activists returned to federal court in Great Falls on Friday, March 6, seeking to stop construction of the Keystone XL oil pipeline by TC Energy, formerly TransCanada, nine months after their first successful lawsuit was thrown out through an executive order by the Trump administration.

Roughly 30 protesters rallied against the pipeline outside the courthouse and on the nearby 1st Avenue North Bridge, waving signs that garnered honks of solidarity and engines revved in counterprotest.

Some of the faces were familiar. Several of the protesters had been present at a nearly identical 2018 rally in support of a lawsuit that in November of that year stopped construction of the proposed 1,200-mile pipeline from Alberta to Nebraska.

“I’ll never give up,” said Debbie McShane, the Lakota president of the American Indian Movement in Montana. McShane waved anti-pipeline signs with her two kids Friday outside the courthouse, just as they had done in 2018. The kids, Sky Running Enemy and Kendalyn Running Enemy, are each a head taller than last time.

“We’re back here because we can’t get this resolved,” McShane said.

Also present were protesters from farther down the proposed pipeline route, including farmer Art Tanderup, who led a contingent from Nebraska, where his land is in the path of Keystone XL. Tanderup also had been present at the 2018 rally.

This time last year, record flooding hit Tanderup’s part of northeast Nebraska, collapsing a dam on a tributary of the Missouri, knocking down bridges, and inundating parts of the state that Keystone XL is slated to cross, and that the Keystone Pipeline already crosses.

“The river decided it would do what rivers do, and it rerouted itself,” Tanderup said.

Oil spills at river crossings are one of the primary concerns of Keystone XL opponents, and while Nebraska has long been a flashpoint in battles to block the pipeline, KXL’s proposed crossing of the Missouri River in remote northeast Montana, just upriver of the Fort Peck Indian Reservation’s drinking water intake, has generated less attention.

The Missouri River Federal Courthouse sits between the river and the rail spur connecting the BNSF yard to Great Falls’ Calumet oil refinery — the closest U.S. refinery to the Alberta oil sands. Expansion of oil sands development hinges on driving down transportation costs with pipelines. Those costs are currently bottlenecked by rail transport.

The last speech of the day, delivered by longtime Oglala Lakota activist Regina Brave of the Pine Ridge Indian Reservation, was repeatedly interrupted by the blaring horn of an oil train departing Calumet at the rail crossing 200 feet away.

The lawsuit heard Friday is one of many filed in Montana’s federal courts against Keystone XL since President Trump resurrected the long-delayed pipeline soon after entering office.

The lawsuit was filed in July 2019 by a coalition of environmental groups including the Sierra Club and the Northern Plains Resource Council. It challenges the U.S. Army Corps of Engineers’ use of a Nationwide Permit 12  to approve Keystone XL; plaintiffs say that permit’s application is overly broad, given that the pipeline would cross hundreds of rivers, streams, and wetlands, and that its use inappropriately skirts the comprehensive environmental review required by the National Environmental Policy Act, Clean Water Act, and Endangered Species Act.

Compared to the rhetoric outside the courthouse, the hearing was dry. Attorneys from each side presented their version of how the permit functions in regard to Keystone XL, with Judge Brian Morris questioning them on case law specifics and permitting process arcana.

Attorneys for the federal defendants claim the Corps of Engineers does not regulate pipelines, and that therefore NEPA, the Clean Water Act, and the Endangered Species Act do not apply to the permitting process.

Sierra Club attorney Doug Hayes argued that though the corps does not regulate oil tankers, the courts have determined that oil spills are still reasonably foreseeable and must be taken into account when issuing permits.

“Agencies have to look at reasonably foreseeable impacts, even if they don’t regulate those impacts,” Hayes said.

TC Energy attorney Peter Whitfield said only 2% of the Keystone XL pipeline would cross water. Concerning an oil spill, he said, “there’s no definitive proof that it would ever happen.”

The Keystone Pipeline spilled 400,000 gallons of oil into a North Dakota wetland last October, around the same time Montana Attorney General Tim Fox, who is running for the Republican nomination for governor, announced the Montana Department of Justice was intervening in the lawsuit in favor of the pipeline.

The article was published at Anti-pipeline activists return to court to stop Keystone XL — again.