Please ensure Javascript is enabled for purposes of website accessibility As Texas grapples with a pandemic, officials must also prepare for what could be an unusually active hurricane season - THE CHICAGO HERALD Press "Enter" to skip to content

Home » As Texas grapples with a pandemic, officials must also prepare for what could be an unusually active hurricane season 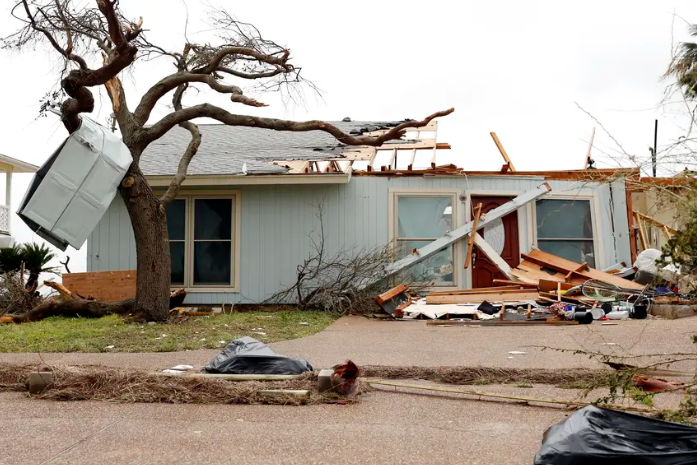 As Texas grapples with a pandemic, officials must also prepare for what could be an unusually active hurricane season

By MITCHELL FERMAN on July 28, 2020
As Texas grapples with a pandemic, officials must also prepare for what could be an unusually active hurricane season” was first published by The Texas Tribune, a nonprofit, nonpartisan media organization that informs Texans — and engages with them — about public policy, politics, government and statewide issues.

HOUSTON — More hurricanes and tropical storms than usual could make landfall in the United States this summer, forecasters predict. That is sending Texans and officials who are increasingly facing severe weather events scrambling to prepare for another natural disaster while they still grapple with an ongoing pandemic and continued national unrest spurred by American law enforcement’s use of physical force against residents.

“Preparing for hurricane season and knowing it happens annually, that in and of itself is stressful,” said Camille Garcia, director of communications and public affairs for the Insurance Council of Texas. “You add the COVID-19, you add the events of this past week, the emotion of this past week, and on top of that you’re facing a weather event that’s possibly done serious damage. That’s very, very stressful.”

State and local officials are trying to adjust their plans, too, hurrying to inform residents in the Houston area and along the Gulf Coast of safe steps they could take in advance of the year’s first storm. Those preparations come less than three years after a wide swath of Texas was battered by Hurricane Harvey and the epic amount of rainfall that storm poured on Houston and Southeast Texas.

Hurricane season began Monday and lasts through November. But already, Tropical Depression Cristobal is spinning over the Yucatan Peninsula and as of Thursday was projected to make landfall primarily in Louisiana, but could also partially impact the Beaumont area of Southeast Texas, forecasters said.

“In typical Texas fashion, we are dealing with multiple challenges at one particular time,” Gov. Greg Abbott said at a Friday news conference at the alternate State Operations Center after he was briefed on state preparations there.

Storms often change paths, which is why the Houston area “is preparing for the worst but hoping for the best,” said Rafael Lemaitre, a spokesperson for Harris County Judge Lina Hidalgo.

“On the Gulf Coast, what we tell the public to do is: Make a plan, build a kit, tap into our emergency notification systems and get to know their neighbors,” said Cory Stottlemyer, a spokesman for Houston’s office of emergency management. “Each one of those steps are a little different this year.”

Having a bag ready to quickly depart in an emergency is essential every year, Stottlemyer said. And this year, that bag should include masks, gloves, hand sanitizer and other equipment recommended by the Centers for Disease Control and Prevention to help protect against the spread of COVID-19, the disease caused by the new coronavirus that has infected nearly 70,000 Texans.

All rescue personnel are expected to be outfitted with personal protective equipment such as masks, Stottlemyer said, and they are expected to practice social distancing when evacuating residents — if possible.

“When it comes to emergency and evacuation, at the end of the day, life safety is critical,” Stottlemyer said. “You might be jamming into a packed high-water rescue vehicle, and social distancing may not be possible in those cases. We’re looking at implementing it where it can be done. We want to reassure the public: If you need to be rescued, we’re going to come and get you.”

Responders at the shelters typically used during storms, such as the George R. Brown Convention Center and NRG Stadium, where the Houston Texans play NFL football, plan to take the temperatures of everyone who enters the buildings. There is also expected to be Plexiglas in place at shelters to help mitigate the spread of the disease, officials said.

“If you’re worried or concerned, you won’t be rejected from a shelter because you don’t have a face covering,” Stottlemyer said, adding that health precautions taken at shelters are expected to mirror the city’s own practices. “Temperature checks at the front, handing out masks and gloves to employees. We’re required to have face coverings on at all times when we’re inside the building. This is how we’re already adapting plans for city facilities, and we’re making the same considerations at all of our sites.”

The city could turn to hotels as possible temporary options to help isolate stranded people or residents who have fallen ill, a move Stottlemyer said the city has not made in the past. But isolation is a method health experts recommend to curb the coronavirus.

“When you have a lot of people in one place, you have the potential for person-to-person contact, and that increases the chances of the spread of COVID-19,” Lemaitre said.

If forecasts of an unusually active hurricane seasons prove true, that would amount to five consecutive years of above-average storm activity. Ultimately, though, just one storm can pack enough punch to wallop an entire region.

“If one hits you, it’s a bad year,” said Brian Kyle, a forecaster with the National Weather Service.

At Friday’s news conference, Abbott acknowledged the dynamic situation that Texas was facing during the pandemic and hurricane season. Abbott said the pandemic requires “greater caution and greater response” in confronting Cristobal, particularly for residents in nursing homes who have been disproportionately vulnerable to the virus.

Abbott added the state will “ensure that those in nursing homes will be able to be moved very safely,” taking care, for example, to separate residents who have tested positive for the coronavirus and those who have tested negative.

If an evacuation is necessary, Abbott suggested the state would utilize more vehicles than usual to move people so that there can be social distancing inside each one.

“How we used to put 50 people on a bus — that number may be down to 15 people,” said Nim Kidd, chief of the Texas Division of Emergency Management.

Alex Samuels contributed to this report.

Disclosure: The Insurance Council of Texas has been a financial supporter of The Texas Tribune, a nonprofit, nonpartisan news organization that is funded in part by donations from members, foundations and corporate sponsors. Financial supporters play no role in the Tribune’s journalism. Find a complete list of them here.

This article originally appeared in The Texas Tribune at https://www.texastribune.org/2020/06/05/texas-hurricane-preparation-2020-coronavirus/.

The Texas Tribune is proud to celebrate 10 years of exceptional journalism for an exceptional state.
Explore the next 10 years with us.