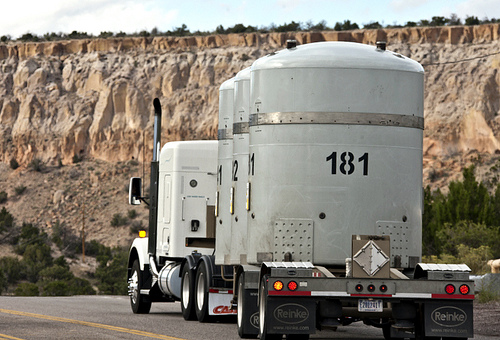 Transportation of weapons-grade plutonium to and from Los Alamos National Laboratory puts New Mexicans at risk, according to panelists who presented to the interim Legislative Radioactive and Hazardous Waste Committee on Friday.

There are current plans to move weapons-grade plutonium from Pantex in Texas to LANL, where it will be turned into a powdered plutonium oxide and then transported to South Carolina. In South Carolina, it will go through more processing before being sent back to New Mexico to be stored at the Waste Isolation Pilot Project near Carlsbad. The entire process requires transporting this plutonium about 3,300 miles across a dozen states using trucks.

“Probability and common sense tell us that when a mission is not well thought out, involves a huge increase in shipments, spans a number of years, passes our neighborhoods twice using a troubled transport system, is a more dangerous form of waste and has packaging problems, an accident will occur,” Hansen said. “It’s a matter of time. Unfortunately, the consequences of an accident with this type of substance are catastrophic.”

WIPP isn’t authorized to take the plutonium, Cynthia Wheeler, co-chair of 285ALL said. She said WIPP can only accept objects that have come in contact with radiation, such as gloves and tools.

The primary concern that opponents have is safety. Wheeler cited a study done by Sandia National Laboratories that found particulate plutonium, like what is proposed to be transported, is almost impossible to clean up if released over land.

If an incident occurred that led to the plutonium being released into the environment during the transportation, it could destroy communities and put first responders at risk, she said.

Wheeler further said a small amount of plutonium, if inhaled, causes cancer 100 percent of the time.

“These particles can’t be felt or tasted and, once inhaled, they lodge in lung tissue where they provide an ongoing and continuous source of radiation,” she said.

The panelists also expressed concerns that there has not been enough public involvement in the planning process and that firefighters in communities where the trucks will be passing through are not aware of the risks.

Legislators agreed that more information is needed about the proposal to transport the plutonium in New Mexico.

Hansen said the governor could put an end to this plan through laws that were put in place when WIPP was developed.

“We have done our part to dispose of our nation’s nuclear weapons waste,” she said.