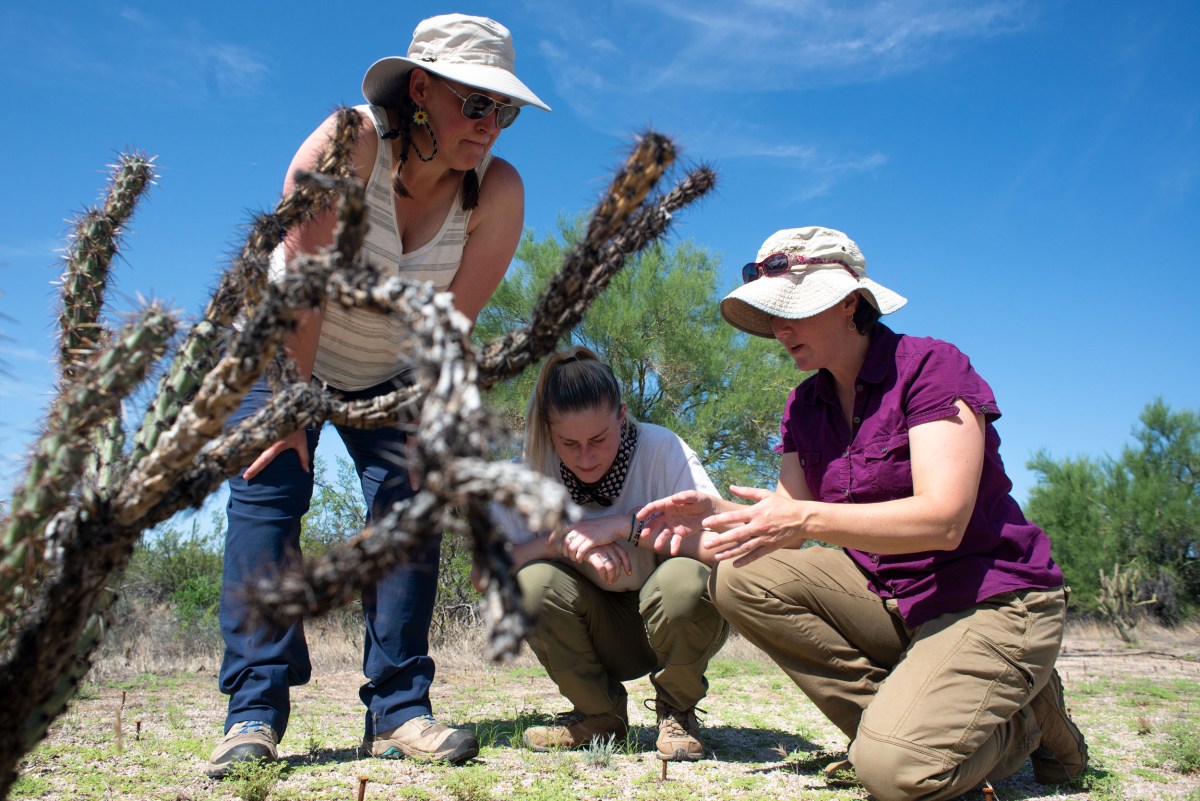 After a rainy July the McDowell Sonoran Preserve in Scottsdale is unusually green with a mix of Sonoran Desert plants and invasive annual grasses that have suddenly sprung to life. The intense desert sun hasn’t yet scorched these vibrant new sprouts, but Bridget Barker is out in the field scouting for fungus that is typically associated with dust.

There’s the potential, Barker said, for the summer monsoon rain to lead to trouble this fall.

An associate professor in the department of biological sciences at Northern Arizona University, Barker wants to learn more about the life of a deadly fungus with spores that are about 20 times smaller than the width of a human hair. It’s called Coccidioides and it is endemic to the West. If inhaled the spores can cause an illness that brings on coughing, fever, night sweats and joint pain—the most common symptoms of coccidioidomycosis—or what’s better known as Valley fever.

In more severe cases, the respiratory infection can also spread beyond the lungs to the skin, brain and other organs. A small percentage of people develop life threatening complications if the fungus invades the brain and nervous system. In Arizona, thousands of people are diagnosed with Valley fever each year. Dozens also die.

The fungus has been known to scientists for more than 100 years, but its ecology remains shrouded in mystery, making it difficult for researchers to learn more about its impact on people and its imminent spread from climate change.

In laboratory experiments, Barker has found that moisture helps the fungus grow, which could lead to an increase in cases later this year as the ground dries out and the spores become airborne from wind. “I think October, November we’re going to see a lot of cases coming in,” she said.

In the McDowell Sonoran Preserve, Barker is working with Anita Antoninka, an assistant research professor in the school of forestry at NAU, and graduate student Marieke Ramsey to find out whether crusting soil organisms that live on the surface of the desert floor impact the presence of the fungus Coccidioides.

Antoninka has experiments throughout the preserve in areas that were previously disturbed by people. In one area, broken glass is strewn about, a remnant from a once-popular campground. Now, there are rows of short metal stakes resembling vintage wood nails marking areas where Antoninka is trying to regrow the crust of desert soil. Antoninka and Barker are working together on a pilot project to find out if the crust, normally part of a healthy desert ecosystem, will act as a natural fungal suppressant.

Phoenix, the state’s largest and most sprawling metropolis, is the fastest growing city in the country. As more residents explore the state’s abundance of outdoor areas known for hiking, biking and off-roading, they also are more frequently coming into contact with desert dust that may contain these fungal spores.

At one point during its life cycle, the fungus forms thin, threadlike structures called mycelia. Segments of the mycelia break off and become airborne if the dust or dirt is disturbed, which is when spores get inhaled by people or pets.

These spores, called arthroconidia, can be carried by wind for miles, and it has been said just one spore may be enough to cause Valley fever. The risk is not just linked to rural communities or people who recreate outdoors. Most infections in Arizona occur around the dense urban areas of Phoenix and Tucson.

Part of the issue with figuring out specifically where Coccidioides lives, Barker said, is that it is actually hard to find when researchers hunt for it. “Even with doing sort of directed sampling, the highest positivity rates that we’ve ever been able to achieve is 10% of our samples being positive,” she said. Commonly, she added, only 1 or 2% of samples collected will come up positive for Coccidioides in the lab.

Out in the mid-morning sun, Ramsey, the graduate student, struggled to put nitrile gloves on her hands in 100 degree heat. She was preparing to dig into the piles of rock and dirt around an unidentified rodent’s den, collecting samples in a small specimen cup that would later be examined in the lab.

Although finding positive samples in soil is rare, Barker said, it seems there is an association between Coccidioides and rodents. Barker has sampled burrows in northern Arizona and found Coccidioides prefers areas where rodents live, but there is not enough evidence to say why. The animals could be a host for the fungus, or the fungus could also just prefer the environment of the rodent burrow itself.

Understanding the ecology of the fungus, such as where it is found and why, is vital because otherwise, it is hard to know how the impacts of climate change on the landscape might influence the range of the fungus across the United States.

Climate change will likely lead to the spread of the disease to other states where it has yet to surface, said Morgan Gorris, an earth systems scientist and postdoctoral fellow at the Los Alamos National Laboratory.

In 2019, Gorris created a model showing how the known preferred ecological niche of Coccidioides fungus—dry and hot—would spread further across the U.S. over the next 80 years. By 2100, under a “high warming” scenario from model predictions, cases of Valley fever could increase by 50%, and states as far north as Montana and North Dakota could become endemic hot spots.

“Because the western part of the United States is already so dry, and it’s going to get even warmer, the fungus might be able to live in areas further and further north,” Gorris said. In the worst case warming scenario, “we found the endemic region could even reach the U.S.-Canada border,” she added.

Current concerns about Coccidioides in Arizona are focused on the southern and central portions of the state. But new research by Barker and colleagues suggests that the noticeable impacts of climate change on this fungus might be expanding north sooner than expected.

“With increasing temperatures, decreasing precipitation, more strong monsoonal (activity),” Barker said of northern Arizona, “the climate predictions would suggest that that is right for cocci. Cocci is going to love that particular environment.”

There is little defense against inhaling a fungus that can easily become airborne—in rural and urban areas—but there may be a new way to communicate that risk on a daily basis.

“We want to have a solution,” said Daniel Tong, a NASA researcher and associate professor of atmospheric chemistry and aerosols at George Mason University. In 2017, Tong published a paper linking increased dust storm activity in Arizona to an increase in Valley fever cases.

Now, he is trying to capture fungus from dust in the air to potentially lay the groundwork for a warning system.

Tong said his dream is to create a “fungal alert” system similar to an ozone or air quality alert that would allow people to know when there was a high risk of encountering Coccidioides in their area. But it is complicated to create a day-to-day model that could predict where infection may be likely, Tong said. Weather, human activity and the natural distribution of the fungus in the soil all play a role in where people are most likely to be infected.

So far, Tong and his team have started their dust collection tests in Pinal County due to the high rate of cases there currently. Their dust collectors are low-tech, just store-bought cake pans and marbles, but they’re ideal for trapping dust as it blows through the air. If the research can help inform modeling, he hopes it can graduate beyond a federally funded project. “We want to build a system and transition that to local agencies,” Tong said, “but you know, before we get there I think there’s a lot of research to do.”