Please ensure Javascript is enabled for purposes of website accessibility Eric Adams’ First Budget Is Almost Here. Will It Be Reality-Based? - THE CHICAGO HERALD Press "Enter" to skip to content

Home » Eric Adams’ First Budget Is Almost Here. Will It Be Reality-Based? 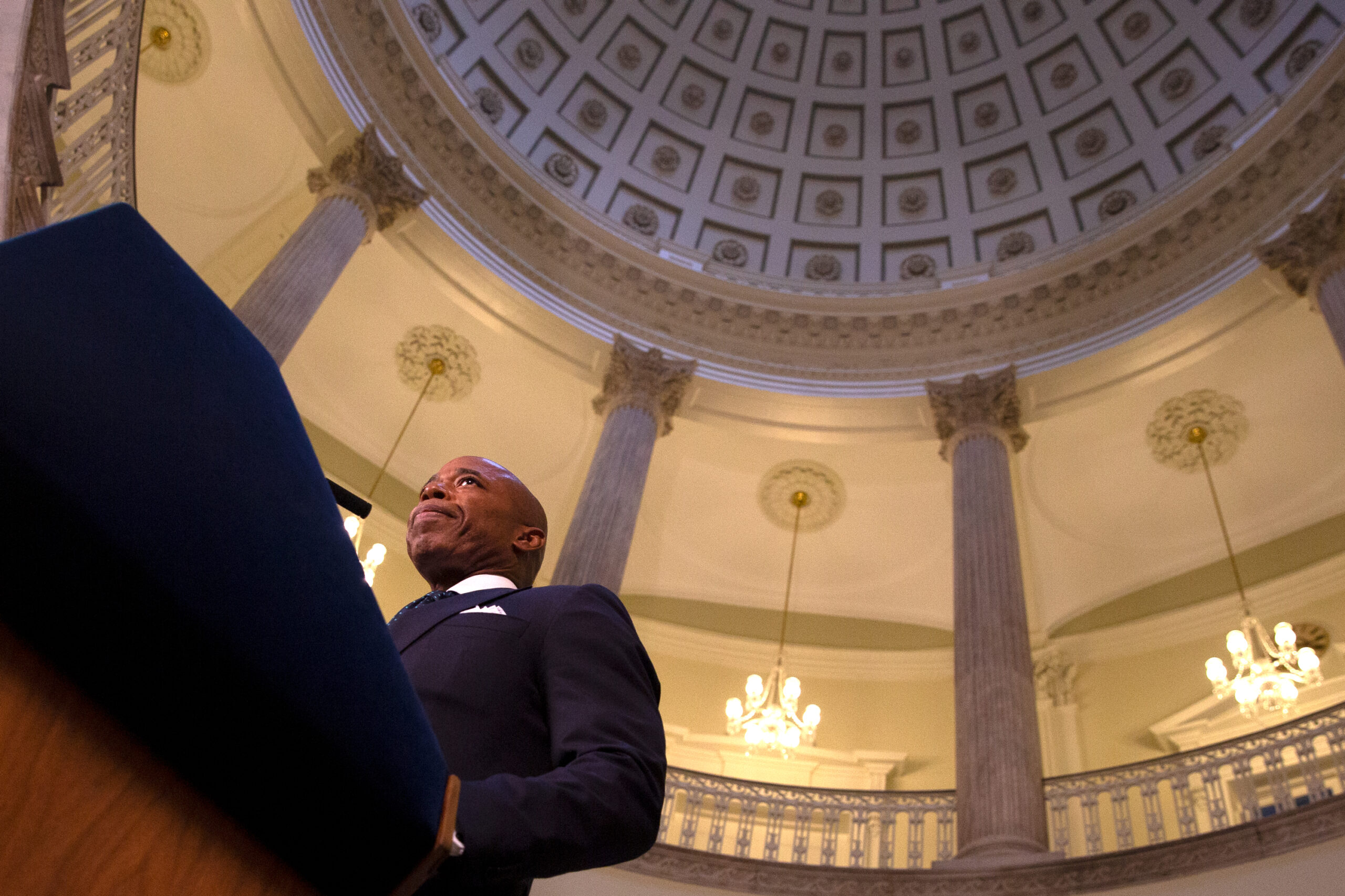 Eric Adams’ First Budget Is Almost Here. Will It Be Reality-Based?

With Mayor Eric Adams scheduled to present his first budget this week, a surprisingly strong rebound in property values has given him a gift of as much as $1 billion in unexpected tax dollars to help him weather the end of federal pandemic aid.

That’s based on his tax collectors’ assessment that New York City real estate is worth $1.4 trillion all told — 2% higher than before COVID struck.

But fiscal watchdogs warn the apparent boost in property tax revenues by the Department of Finance may disappear by the time a final budget is adopted at the end of June. Meanwhile, Adams must make a series of other tough calls on how the coronavirus will play out for the city’s economy and the taxes it generates.

Whatever the final numbers, the budget the new mayor unveils for the fiscal year beginning July 1 will signal what his priorities are both for this year’s spending and for his first term more generally.

“The budget will be the fuel that drives much of what the administration hopes to accomplish,” said Ana Champeny, deputy research director at the Citizens Budget Commission. “It will manifest Mayor Adams’ programmatic priorities, approach to relief and recovery, commitment to efficiency and quality, and how much he is willing to help protect New Yorkers from future fiscal threats.”

Adams came into office on Jan. 1 with advantages already in place. The soaring stock market and low interest rates had reduced the payments the city has to make to its pension plans and bondholders. Wall Street, which recorded its second-best year for profits ever in 2021, also boosted income tax collections.

In his final budget update in November, his predecessor, Bill de Blasio, used such increases in revenues to reduce the budget deficits Adams faces in his first term by one-third, to $8 billion. De Blasio said the city would spend $102 billion in the current year ending June 30, projecting a slight reduction of about $1 billion for the year beginning July.

Since then, the city has released its tentative property tax assessments for the upcoming fiscal year. They estimate the city has more than recovered from the decline in values that resulted from the myriad impacts of the pandemic, from business lockdowns to widespread relocations by residents who could afford to leave.

City Comptroller Brad Lander, in a detailed analysis published last week, projected that the new tax assessments will produce $1 billion more in revenue that had been projected for the upcoming year, and by an unspecified amount for the rest of the mayor’s term.

“Residential properties have seen strong gains, with single family home tax gains surpassing 2020 levels, and commercial properties are rebounding, both of which bode well for our city’s economy and budget,” Lander said in a statement to THE CITY.

While Adams’ Department of Finance found a 2% increase in values overall to reach $1.4 trillion, those gains are unevenly spread — and may not be entirely reliable.

Single-family homes and other residences are now worth 8% more than before the pandemic. While increases are smaller for condos, coops and apartment buildings, they too are now worth more than they were in 2019.

For example, the median rent after landlord concessions reached $3,467 in Manhattan, the second-highest ever for January. Mostly residential Staten Island is also booming, with values now 10% higher than before the pandemic.

More problematic is the city’s projection that commercial property has also rebounded to about 92% of what it was worth in 2019. Experts agree values have increased for  the best office buildings, usually referred to as Class A space, because the large corporations and  professional service firms that occupy those buildings have continued to pay rent even as their employees worked remotely.

But the city projects the same gains for less fancy Class B and Class C buildings, whose tenants have been hit harder by the pandemic and are expected to have a harder time remaining leased up as tenants move up to Class A buildings to lure back workers who have become accustomed to being remote.

Virtually every owner of an office building in New York will file a legal challenge to their assessment this year on the grounds that the city failed to assess the impact of COVID on their finances, according to a lawyer who works on tax issues who asked not to be named.

The system also keeps tax bills low in areas with sharply rising values, such as brownstone Brooklyn, while charging much more to homeowners further out in the boroughs.

A commission appointed by de Blasio issued a report in December with reforms that would end the inequities, but the resulting increase in taxes for many homeowners has made politicians gun-shy about implementing changes.

Adams has called the system “totally unfair” and declared during his campaign: “We need to shift the tax burden off renters and homeowners in less affluent areas to the owners of pricey apartments in wealthy areas.”

Yet the system is largely controlled at the state level, and Adams did not bring up property taxes in his budget testimony in Albany last week.

In his budget, Adams will also have to present a rear-view-mirror picture of  the ups and downs the city’s economy endured in the past year as a result of the Delta and Omicron variants.

In November, de Blasio lowered the city’s estimate of the jobs the city added in 2021, but did not lower the taxes he believed the city would collect. He also did not publish the actual economic assumptions he had made.

And while income tax collections have been much more robust than expected over the past two years, many of the factors that bolstered them are receding.

The stock market has faltered and interest rates have risen, dampening the outlook for Wall Street, which accounts for 10% of the city’s tax revenue. COVID aid also bolstered residents’ income through extended unemployment benefits and stimulus checks, while PPP loans supported payrolls for both employees and owners.

De Blasio already projected a decline in income tax revenue for the current year, but the city may have to make further reductions because of the uncertainties, said Champeny of the Citizens Budget Commission.

“Personal income depends on the jobs coming back, employment and wage growth at high-wage jobs, and continued growth on Wall Street,” she said. “And we don’t know the extent of outmigration or the long-term impact of remote work.”

The revenue issue is crucial because de Blasio’s November update funded more than $1.3 billion in spending with federal aid — including for popular programs such as pre-K for 3-year-olds, which will run out toward the end of Adams’ term. If revenue isn’t sufficient to cover the gap, the city will have to cut the programs or raise taxes to keep them going.

Fiscal experts will also be watching to see how Adams follows through on his pledge to make the city more efficient by forcing agencies to reduce their expected spending by 3% — and whether he does so through consolidation, the use of technology or just a squeeze on all agencies.

State Comptroller Thomas DiNapoli has meanwhile called for an increase in the city’s reserves to prepare for the next fiscal crisis. More immediately, the city has also set aside no money for pay increases in contracts with municipal unions that begin expiring this year.

This article was originally posted on Eric Adams’ First Budget Is Almost Here. Will It Be Reality-Based?