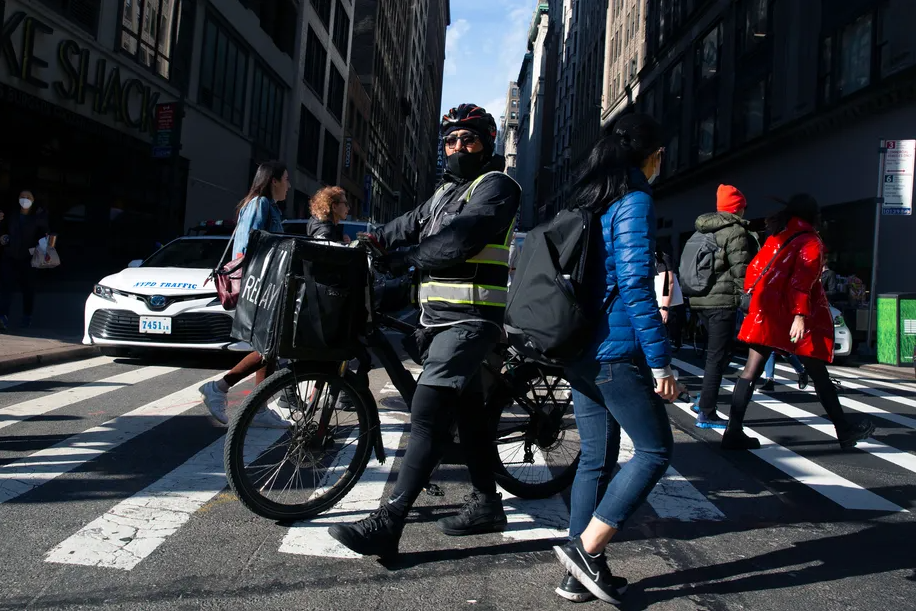 New Manhattan Borough President Mark Levine is aiming to create a “resources center” for gig economy workers like deliveristas, while also shaking up diversity on his community boards –– aiming to recruit more cyclists and pedestrians.

Both initiatives are part of Levine’s “transition report,” which details 29 long-term goals organized under several priorities that include equity, public health, and resiliency and sustainability.

The gig workers support hub would be used for independent contractors to get more information about issues such as wage theft, according to the plan. The borough president’s office would also provide services for how to sign up for healthcare.

Initially, they’ll run some services out of a conference room in the Municipal Building, where freelancers and other gig workers would be allowed to work and access educational services. But Levine is pledging to use capital funding allocated to the office to create a separate hub in Manhattan.

“I’m concerned about the lack of infrastructure for the growing number of gig economy workers in Manhattan,” Levine told THE CITY in a phone interview on Thursday.

The idea is separate from push for dedicated hubs by Sen. Chuck Schumer (D-N.Y.), which Levine also supports.

Organizers for Los Deliveristas Unidos, a group that advocates for thousands of app-based food delivery workers, are supportive of having an open space in Manhattan for gig workers but stressed the need for full-fledged hubs dedicated for workers.

Hundreds come in and out of Los Deliveristas Unidos’ office in Williamsburg, Brooklyn, regularly for various needs, from using the bathroom to questions about what to do if they get into an accident, according to Hildalyn Colon-Hernandez, the director of policy and strategic partnerships for the group.

“‘I got deactivated,’ ‘The app doesn’t pay me,’ ‘I got into an accident — what do I do?’” said Colon-Hernandez, detailing some of the issues workers bring up. “Wage theft is real in the apps world –– ‘What do I do, how do I fix it, how do I deal with that?’”

Workers have said they want multiple hubs in Manhattan, given that it’s the busiest borough for deliveries. Ideally, these spots would have room for app-based workers to rest, conference with staff about work-related issues and charge electric bicycles.

Gustavo Ajche, a delivery worker from Bensonhurst and a co-founder of Los Deliveristas, said the proposed one hub focused on informational services is a decent start, but that full fledged service centers are still needed across Manhattan.

“I think it has to work out so it’ll be in different locations in the city, like two or three places,” said Ajche. “One in Downtown, one in Midtown, one in uptown, because we’re talking about a lot of workers, not just a small group.”

Diversity among New York City’s community boards, which tend to have more white residents than the neighborhoods they represent, has been a longstanding issue.

The BP’s office will also add questions to discern whether or not an applicant owns a car, and allow people to identify as cyclists and pedestrians, as well as union members, seniors, young residents and people with disabilities.

“For a longtime there’s been questions on whether you’re a renter or an owner, because it makes it easier to ensure you have a diversity of perspectives in that way. But we haven’t had that for how to get around,” said Levine. “There’s so much that boards have to deal with that’s impacted by how you get around.”

Levine added, “And there are boards in Manhattan where people who don’t get around by car are underrepresented. That influences policy debates and we want every perspective, car owners included.”

About 22% of Manhattan residents walk to work, a higher rate than in any other borough, according to the Census Bureau.

“It’s fantastic that Borough President Levine and his team are looking to attack that inadequacy and inequality in the community board vetting process because diversity comes from many different aspects of life,” he added.

The deadline for applications to serve on Manhattan’s community boards is March 1.