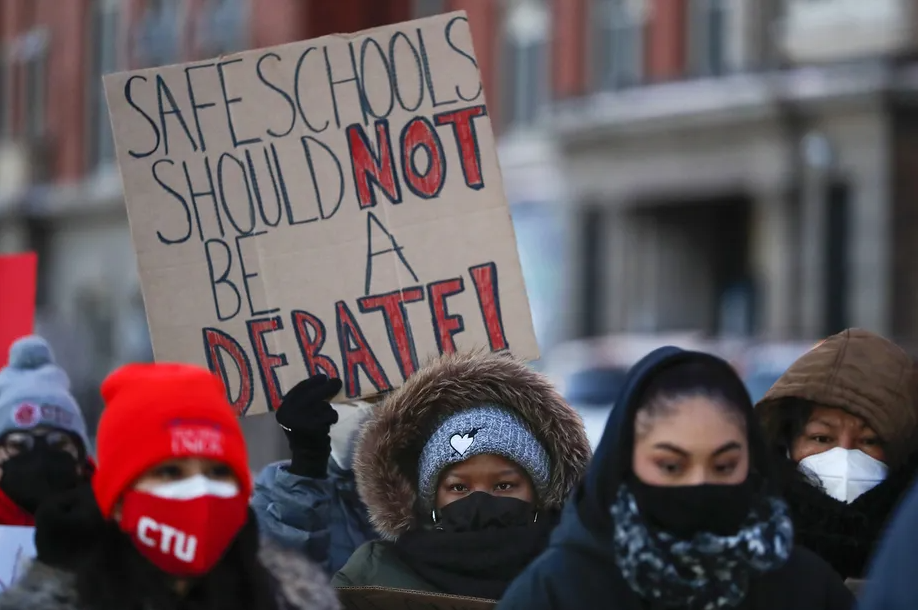 With mixed feelings and frustration with their bosses, Chicago teachers began voting Tuesday afternoon on a tentative agreement that would end a standoff between Chicago and its powerful teachers union.

The city’s students, who missed five days of classes as the two sides negotiated over COVID safety measures to reopen schools, will return to classrooms Wednesday — but the teachers’ vote will ultimately determine whether they stay there.

Several teachers on Tuesday said they were undecided and were consulting colleagues, while others took strong positions: voting for it out of concern for students and or against it because they worried it didn’t buttress schools enough from the highly contagious omicron variant.

Following the lead of union delegates, who voted Monday night 63% to 37% to send the proposed agreement to the 25,000-member body, the union’s rank and file are expected to pass the agreement. Voting will start Tuesday afternoon and end Wednesday at 4 p.m.

A simple majority will determine the outcome.

Union leadership planned to meet with teachers Tuesday evening, and the group’s House of Delegates — which has the power to stop or start a work action and would make the call on next steps should the proposal get voted down — is scheduled to meet again Wednesday evening.

“Remember, we weren’t fighting to make something good a little better. There was zero metric,” President Jesse Sharkey said in a message to members about what the next 24 hours would bring. “Whichever way you vote, every last word of protection in that document, you fought and sacrificed to gain.”

The agreement establishes school-level metrics that will determine when campuses are flipped remotely, boosts contact tracing by paying teachers extra to fortify the district’s efforts, and sets a goal of securing 100% of parents to opt-in to COVID surveillance testing by Feb. 1 through phone banking and joint CPS-CTU efforts.

But it falls short of some of the union’s key demands: districtwide metrics for flipping schools, an opt-out program that would automatically sign students up for testing, and a temporary period of remote learning.

Teachers say the vote, even a passing one, won’t end the rancor, and as of midday Tuesday, some were still trying to decide what to do.

“This (proposal) is clearly inadequate,” said Andrew Johnson, a teacher at Westinghouse College Prep, a selective enrollment high school on Chicago’s West Side. “But I am still thinking through the consequences of rejecting this agreement.”

He said employee attendance at his school Tuesday was relatively low, and the mood was subdued, with little appetite among educators for rehashing the developments of the past week.

Johnson and other teachers expressed concerns that some of the provisions in the plan, such as paying unionized staff to step up and help with contact tracing at schools, will add another burden to a near-burned out workforce.

Johnson’s colleague, Anne Prendergast, a union delegate at the school, said she planned to vote against the measure. She said she did not trust the mayor or the district to uphold safety protections when they “go on network media and say one thing and what we are experiencing is something different.”

Russell is vaccinated yet recently contracted COVID; she still has a cough and congestion and is quarantined until mid-January. When schools reopened after winter break and she had to stay home sick, the students in her enrichment seminar — geared toward helping Black teens find their place at the school — were put into open gym.

“We have to literally be unable to deliver an education and then be reactive,” said Russell, who thinks the school district should pause in-person learning until the omicron spike subsides and then implement universal testing.

Her children attend a charter school where every child is tested once week. The school offered a testing drive-thru to kick off operations after winter break, a reassurance to parents like her.

Samson Widerman, who teaches English at Solorio High School on the city’s South Side, was undecided as of mid-afternoon Tuesday. While many teachers were expressing disappointment, he thought the proposal did contain some key wins for educators, most notably metrics for flipping whole schools to remote — a factor he called “vital.”

But he still had lingering concerns as the omicron variant causes numbers to surge. “I am not convinced the specific percentages in the proposal are acute enough to keep teachers, staff, and students safe,” he said.

Still, the union, Dominguez said, pushed the mayor on more testing, a metric on flipping schools, and masks. The fact that “we had to fight for the basics in a pandemic is outrageous,” he said.

Dominguez, who teaches students with disabilities, was “baffled” by the mayor’s stance against temporary remote learning.

Dominguez learned only minutes earlier that Mayor Lori Lightfoot had tested positive for COVID and said she did what she needed to do for herself, which was to isolate.

“I’m glad she is taking care of herself and quarantining, but I wish that would be the same decision for our families, our students, and our staff right now,” Dominguez said.  “We are in danger. Rates are dangerously high.”

Teachers also wondered Tuesday how they will talk about the abrupt cancellation of school midyear with their students. After teachers voted to teach remotely last week, the city canceled classes for five days and locked teachers out of their digital accounts, severing communication with students and families.

Some teachers found workarounds to reach out to families or posted letters to social media, and about 16% of teachers reported to school buildings amid the standoff. Many others lost communication with their classes entirely.

Dr. Winnie Williams-Hall, who teaches students with disabilities at Nicholson STEM Academy in Englewood, said she planned to hold conversations with her students Wednesday so they could ask questions and express their feelings about the abrupt break.

“I plan to incorporate social emotional learning activities throughout the week and help them ease back into classroom routines and protocols,” she said.

Williams-Hall said she will vote for the proposal because students such as hers are at a “clear disadvantage” during remote learning.

“I am not opposed to remote learning,” she explained, “but I would prefer to have that in-person connection to my students.”

Chicago Public Schools and the teachers union need to come together to hold a conversation with teachers of all networks to move forward, Williams-Hall said. “I would love for there to be accountability for things that we are supposed to have in place such as equity of resources, ongoing COVID testing, and accurate and timely contact tracing.”

Despite feeling deflated in the outcome of negotiations, some teachers were resigned about returning to in-person instruction.

A teacher at Benito Juarez High School on the city’s Lower West Side, who asked to remain anonymous for fear of retaliation from the union, said the fight was ultimately a “loss” for teachers.

“It has been pretty upsetting to be a teacher,” they said.

Last week, the teacher voted against working remotely because they felt the call should fall on the district and the mayor to protect students and staff.

At the same time, the teacher said the union failed with its messaging, which should have focused on the staffing shortages stretching teachers thin.

At the Lower West Side campus, the return to school has been mired with staffing shortages. In some instances, up to three classes are being held in the auditorium. After the break, the school had 31 staffers out with COVID and empty classrooms because many students weren’t returning after the holidays, the teacher said.

Last Monday, 58% of students were in attendance and only a slight uptick to 63% before the walk-out, they said.

The district, the teacher said, did not accurately represent what was happening with testing and undercounted COVID cases at her school — a case count that put a strain on the staffing problems.

The quality of education suffers when schools aren’t fully staffed, they added.

Still, the teacher planned to vote for a return to classes.

“We tried our best to protect people in the best possible way,” they said, lamenting that teachers got “nothing” from negotiations other than masks.

“I have to accept that we lost and move on and hope people don’t get sick,” the teacher said.