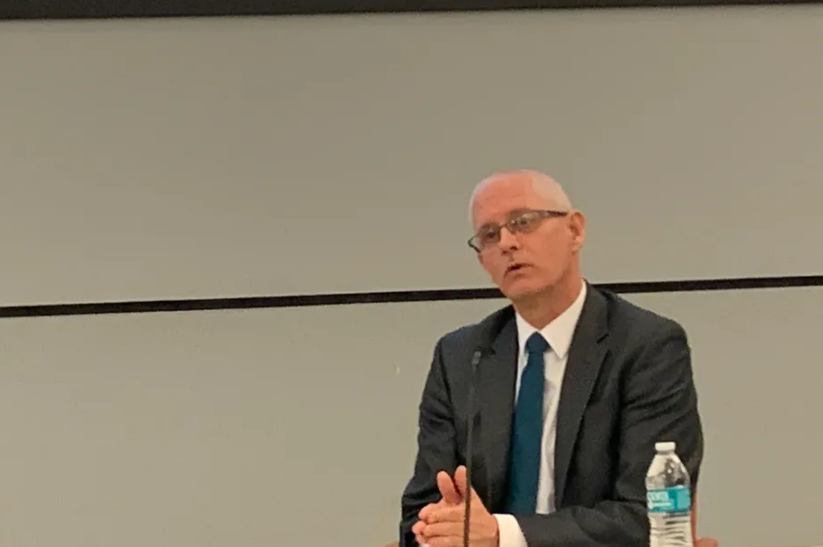 Philadelphians got their first look at one of the three finalists to be the new school superintendent Monday, as John L. Davis participated in small group meetings with parents, students, and teachers, and also attended a town hall open more widely to the public.

Davis, now the Chief of Schools in the Baltimore City school district, reiterated several times that a key to success in urban school districts is to have educators who have a sincere belief that students can learn to high standards and overall conditions can improve.

He will want examples, he said – just like students, parents, and educators asked him for examples of what he has accomplished in a 30-year career in education.

Meanwhile, Davis told the parent group that he is “first and foremost” a parent who sent two sons through public schools in Washington, D.C., and now has a daughter there.

Davis said that he went through a “kind of normal progression” through his career in education, starting as a middle school math teacher and rising to principal and then central office administrator in urban school districts.

Parents and students asked him questions about trust and transparency, leadership style, special education, and how a district’s operations contribute to improving education. Students also wanted to know how he planned to increase their motivation.

They were also concerned about equity, both within the district and between Philadelphia and richer suburbs.

“The urban-suburban dynamic is a tough one,” he said, before essentially saying that Philadelphia needs to push as hard as it can to adopt policies and get resources that will help students attain higher levels of achievement. It’s important to provide “education above the basics,” he said.

The issue of equity also came up in a discussion of admissions policies to selective high schools. This year, the district switched to a centralized lottery system in choosing students for “criterion based” schools. This resulted in some high-achieving students getting no offers of admission to any of them, causing something of an outcry.

The goal of Superintendent William Hite and the Board of Education is to make enrollment in the district’s top schools, especially Central High School and Masterman High School, better reflect the district’s demographics. Most students in these schools are either white or Asian American, even though the district is about 80% Black and Latino.

One parent asked Davis pointedly, “How important is it to achieve equity without sacrificing meritocracy?”

Davis said the answer is to focus on “getting more kids in because they are educated well” in the earlier grades, including middle school.“I’m going to lean a bit towards the equitable way of thinking about it because, frankly, there are too many students that come from disinvested areas that just don’t have that opportunity,” Davis said. “We’ve got to open it up and give them that opportunity. I’m going to lean in that direction.”

In response to a question about how he would motivate students to stay in school, Davis said he would fight hard for extracurricular activities and courses that meet their interests. “You have interests and talents that are more than English, math, social studies and science,” he said. He said it is important to go beyond the basics and survey students to see what they want.

In a discussion of funding and making sure Philadelphia has enough money to give students what they need, Davis referenced Pennsylvania’s school funding lawsuit and said, “Every state has its own political dynamics.”

But he pointed out that the Washington, D.C., district managed to modernize its buildings, and also pointed out that the Maryland legislature recently voted to give more money to school districts for their operating budgets. “I want to provide hope it can happen. I’ve seen it happen,” he said.

Davis also said one thing that attracted him to Philadelphia was the Board of Education’s “guts” in adopting “goals and guardrails” for student achievement, leadership, and school conditions, and being diligent about monitoring progress. A lot of district leaders, he said, “don’t want to put out goals … what really counts is what is happening in the classroom. We have to be laser focused on that.”

At a Monday evening town hall with members of the public, 171 people signed up to attend in person, but only about 20 showed up (more than 300 viewed it online). At this event, Davis was asked about charter schools, LGBTQ students, and his identity as a white man seeking to lead a school district that is majority Black and Latino. Of the three finalists, Davis is the only white person.

“As a country we have not done right by Black people for a long long time. We all know this history, I’m not afraid of it, but I’m aware of it,” he said. “I always feel like I have to bring my best, and I have to prove myself every single day.”

Earlier, in the parent meeting, Eric Marsh said he was concerned about the lack of women finalists, especially since women are the majority among educators. The Alliance for Philadelphia Public Schools, a frequent critic of the district’s leadership, called for the Board of Education to reopen the search.

On charter schools, Davis  said he was “neither for or against them,” but stressed that they needed to be accountable.

Davis went to meet with state legislators from Philadelphia after the town hall.

Fellow finalist Khrish Mohip, now the Deputy Education Officer of the Illinois Board of Education and a former school official in Chicago and Youngstown, Ohio, will go through a similar process on Tuesday. On Wednesday, the city will hear from Tony B. Watlington, the superintendent of Rowan-Salisbury school district in North Carolina.