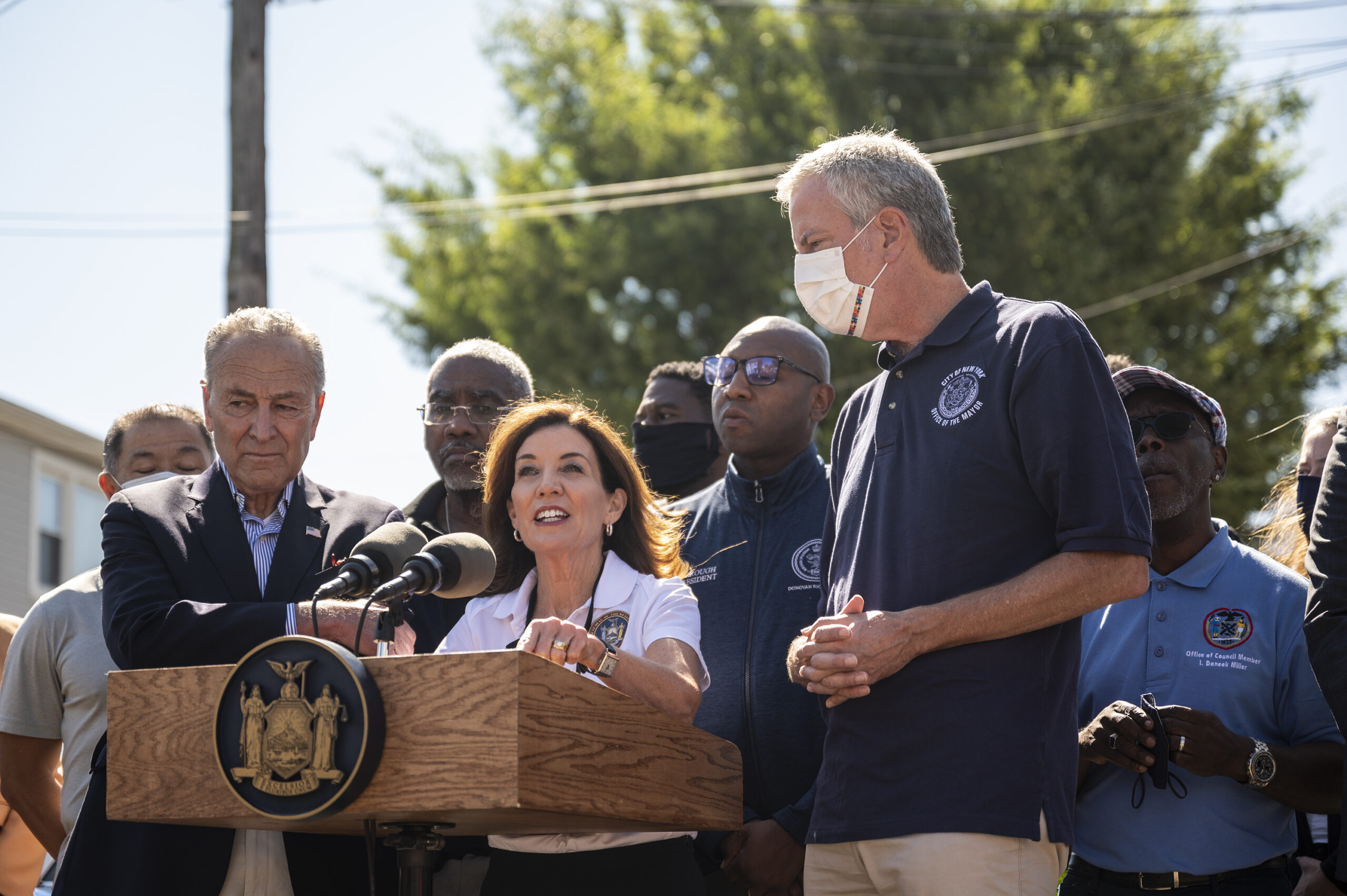 The $27 million fund, to be paid for jointly by the state and city, will be aimed at people ineligible for aid through the Federal Emergency Management Agency because of their immigration status, officials told THE CITY.

“When I saw the devastation of Hurricane Ida, I pledged that we would do everything in our power to help impacted communities recover, and this funding is a fulfillment of that promise,” Hochul said in a statement.

“With these resources dedicated to undocumented New Yorkers who are ineligible for FEMA relief and partnerships with organizations on the ground, we can close gaps in aid and help New Yorkers in need. I urge eligible New Yorkers to apply to get the funding they need to rebuild,” she added.

The governor will make the aid announcement at the Queens Museum alongside the head of de Blasio’s Office of Immigrant Affairs and near many of the neighborhoods pummeled hardest by the floodwaters, her office said.

THE CITY reported in the wake of the punishing Sept. 1 storm that undocumented immigrant victims frantically sought financial help replacing possessions and repairing their homes, after discovering they do not qualify for potentially tens of thousands of dollars from FEMA.

“A program like this is a moral imperative not just in New York City, but everywhere in the country,” said Bill Neidhardt, a spokesperson for de Blasio. “We know the climate crisis is disproportionately hurting immigrant communities and communities of color globally, and our response to climate-driven disasters must address that.”

Parallel to FEMA payouts, the new fund will provide cash assistance to undocumented New Yorkers compensate for property damage or displacement from the storm.

The deluge peaked at more than three inches in a single hour, overwhelming street drainage systems and cascading rainwater and sewage into homes. The city came to a screeching halt as roadways turned into rivers and subway stations into waterfalls.

The Ida fund follows a recent pandemic precedent: In June, New York’s state legislature established a $2.1 billion Excluded Workers Fund for those who labor in the cash economy — particularly undocumented immigrants — and were ineligible to collect federal COVID unemployment payments.

In the storm’s wake, local lawmakers representing hard-hit communities pressed the administration of President Joe Biden as well as the governor’s office to help undocumented Ida victims to access aid.

Assemblymember Catalina Cruz (D-Queens), who represents portions of hard hit Corona, called the fund a “much needed humanitarian effort” for people who would otherwise be “left destitute.”

In Ida’s immediate aftermath, her office fielded calls from two dozen households excluded from applying for FEMA help because of their immigration status. Cruz, who  was once undocumented after emigrating from Colombia, decided to raise the issue with the Hochul administration.

“Many in our community lost everything after the devastating floods caused by Ida. They turned to FEMA for help, because recovery is their job and responsibility. Instead, some of our constituents were met with the inhumane reality that they were excluded from much needed support because they lacked a Social Security number,” she told THE CITY.

‘Move Forward With Their Lives’

Assemblymember Jessica González-Rojas (D-Queens), who represents neighboring portions of Corona, told THE CITY that she had raised the exclusion of undocumented New Yorkers to Biden and the head of FEMA when the president toured the region and pledged assistance.

González-Rojas said she was “thrilled” that the city and state worked together on the aid plan.

“My district was hit hard by Ida and I witnessed firsthand the devastation that ensued. Every single family should be able to access the necessary resources to build back from this storm, no matter their immigration status,” she said.

The state’s Office of New Americans will help manage the fund, alongside with several local nonprofits, according to the governor’s office.

New Yorkers whose households were excluded from FEMA assistance will have until Nov. 26 to apply for the funds.

“Through this fund, neighbors and loved ones in dire need of relief will be able to begin repairing their homes and move forward with their lives,” said Theo Oshiro, co-executive director of the immigration advocacy group Make the Road New York, which will help connect people to the funding.