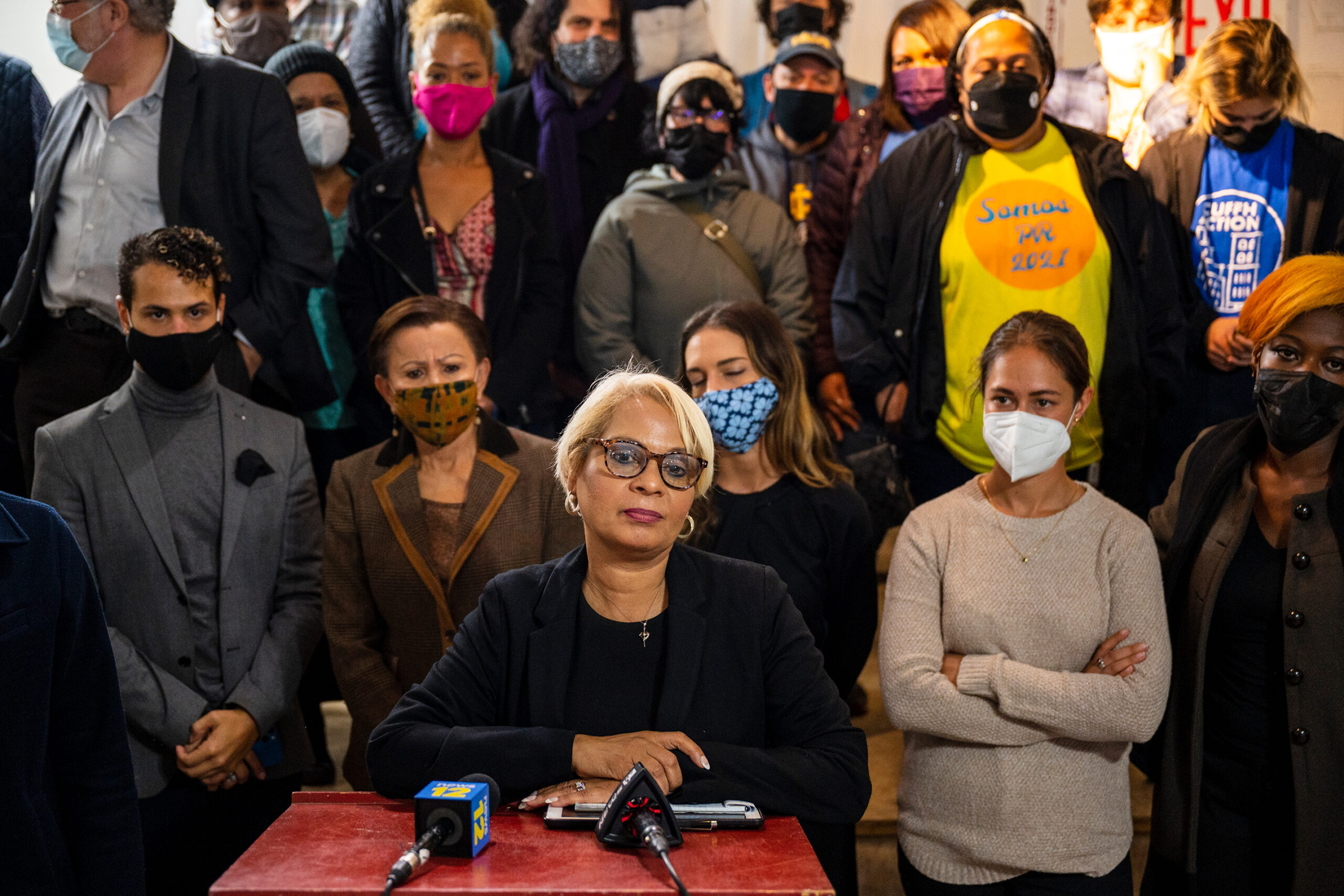 Several top Brooklyn elected officials joined the chorus Friday calling for the borough’s Democratic Party boss to step down after her husband recited a vulgar, sexist song lyric during a Zoom meeting.

“We will not allow for anyone to disrespect any of us, particularly when that disrespect comes from a minority woman,” said Velazquez. “We have fought too long and too hard –– sometimes even fearing being punished.”

Velazquez said that Bichotte-Hermelyn “could be vindictive” — potentially harming the political fortunes of out-of-favor party members at a time when redistricting is in the works.

The group of elected officials, which included a slew of district leaders, repeatedly contended that rancor over Bichotte-Hermelyn’s leadership has taken focus away from electing Democrats to office.

“To all the district leaders that empower this county boss, you’re also on notice. I’m putting everyone on notice,” said Reynoso. “We’re paying attention: what are you doing to empower the Democrats in Brooklyn and if you’re not doing your job, we’ll find somebody who can.”

Long-simmering tensions boiled over Monday when Edu Hermelyn, a district leader, recited song lyrics in Spanish that appeared to target Davila, THE CITY reported on Thursday.

Hermelyn argued he didn’t grasp the sexual connotations of the lyrics of “Esta Loca” (“She’s Crazy”). But the politicians who spoke out Friday said the incident exemplified what Davila called Bichotte-Hermelyn’s “toxic” two-year reign.

“I have never imagined being within a professional setting and having to be exposed to such vulgar, sexualized and misogynistic language,” said Davila, whose voice faltered during her emotional appeal.

Attendees raised a litany of complaints over Bichotte-Hermelyn, charging she shut out the dissident Brooklyn Young Democrats, mocked members she deems “progressives” and clamped down on reformers with the New Kings Democrats. She’s also been caught in a rift between Black and Latino lawmakers.

The politicians conceded they aren’t sure they have enough support to remove Bichotte-Hermelyn — or even what the procedure would be to oust her.

“They were not elected by the voters, they were not elected by my constituency. And we will have our day with them this coming June,” said Richardson, referring to unelected district leaders whom Bichotte-Hermelyn’s executive committee appointed to vacant positions, such as her husband, but can still be challenged in an election.

Bichotte-Hermelyn didn’t comment directly on the group’s criticisms, and simply said that she is focused on her job as county boss.

“My priority continues to be on protecting the borough from GOP threats and uniting the party to elect diverse Democrats up and down the ballot,” she said in a statement.

A spokesperson for the New King Democrats, a reform group with 300 members, told THE CITY Thursday that the party has reduced the number of formal annual meetings to only one, down from two meetings, for a county committee with nearly 5,000 members.

Bichotte-Hermelyn contended that no rules were broken.