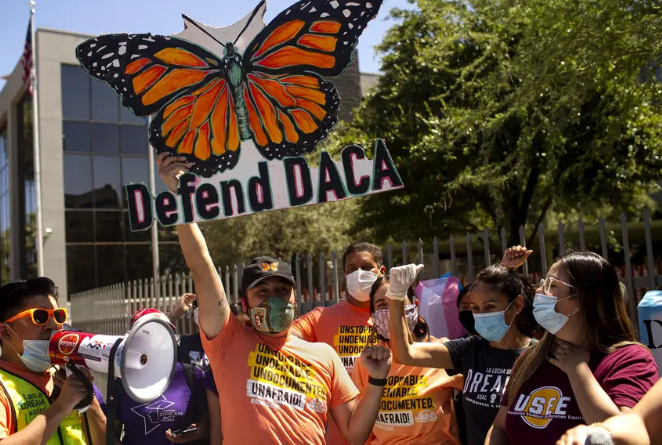 By Julián Aguilar on July 28, 2020
“Trump administration says it will reject new DACA applications while weighing future of the program” was first published by The Texas Tribune, a nonprofit, nonpartisan media organization that informs Texans — and engages with them — about public policy, politics, government and statewide issues.

The Trump administration announced Tuesday that it will reject new applications for the Obama-era Deferred Action for Childhood Arrivals program despite a federal judge’s order earlier this month that new applicants should be given consideration.

The judge’s order came after the U.S. Supreme Court ruled in June that the Department of Homeland Security didn’t follow proper procedure when it ended the program in 2017 and allowed DACA to stand. But on Tuesday, DHS acting Secretary Chad Wolf said he was instructing staff “to take all appropriate actions to reject all pending and future initial requests for DACA” and exercise its authority to “to terminate or deny deferred action at any time when immigration officials determine termination or denial of deferred action is appropriate.”

As of December, there were about 107,000 Texans with DACA permits, according to federal statistics. The program applies to undocumented immigrants who came to the country before they were 16 and who were 30 or younger as of June 2012. The program gave each recipient a renewable, two-year work permit and a reprieve from deportation.

The DHS announcement Tuesday also limits the protection for recipients who renew their DACA permits to one year instead of the original 24 months.

“As the Department continues looking at the policy and considers future action, the fact remains that Congress should act on this matter,” Wolf said in a statement. “There are important policy reasons that may warrant the full rescission of the DACA policy.”

Even after what many believed was a loss for the Trump administration at the hands of the U.S. Supreme Court, the president said he was instead given time to figure out how to end the program.

“The Supreme Court asked us to resubmit on DACA, nothing was lost or won,” Trump tweeted at the time. But he made statements arguing that he had the power to implement action on DACA that would protect young immigrants, though he was unclear on details.

“They are not [completely] terminating DACA because of politics, but at the same time they are taking a strong stance and saying they are going to limit the program,” he said. “But they also have power to cancel permits so what they are trying to do is also send a message that they are trying to be tough on Dreamers.”

Todd Schulte, the president of FWD.us, an immigration and criminal-justice reform group, said the move Tuesday goes against popular public sentiment and could backfire.

“Killing DACA was wrong in 2017. It is wrong today,” he said in a statement. “The President lost in the highest court in the land and he has lost decisively in the court of public opinion. Continuing a pattern of three years of a huge public reaction against his anti-immigrants agenda, the President’s actions today are widely unpopular because they will hurt our country, and will continue to create massive challenges for him in the upcoming election.”

If the Wolf memo issued Tuesday is any indicator, the White House will likely put pressure on Congress to act and blame lawmakers if there is not a comprehensive solution in the late months of a contentious election year.

“Even if the DACA policy could have been justified as a temporary measure when it was created, Congress arguably has had more than sufficient time to consider affording permanent status or immigration relief to the class of aliens covered by the policy,” Wolf wrote. “And yet, although various proposals have been advanced to do that, Congress has so far declined to take action.”

This article originally appeared in The Texas Tribune at https://www.texastribune.org/2020/07/28/daca-trump-texas/.

The Texas Tribune is proud to celebrate 10 years of exceptional journalism for an exceptional state.
Explore the next 10 years with us.