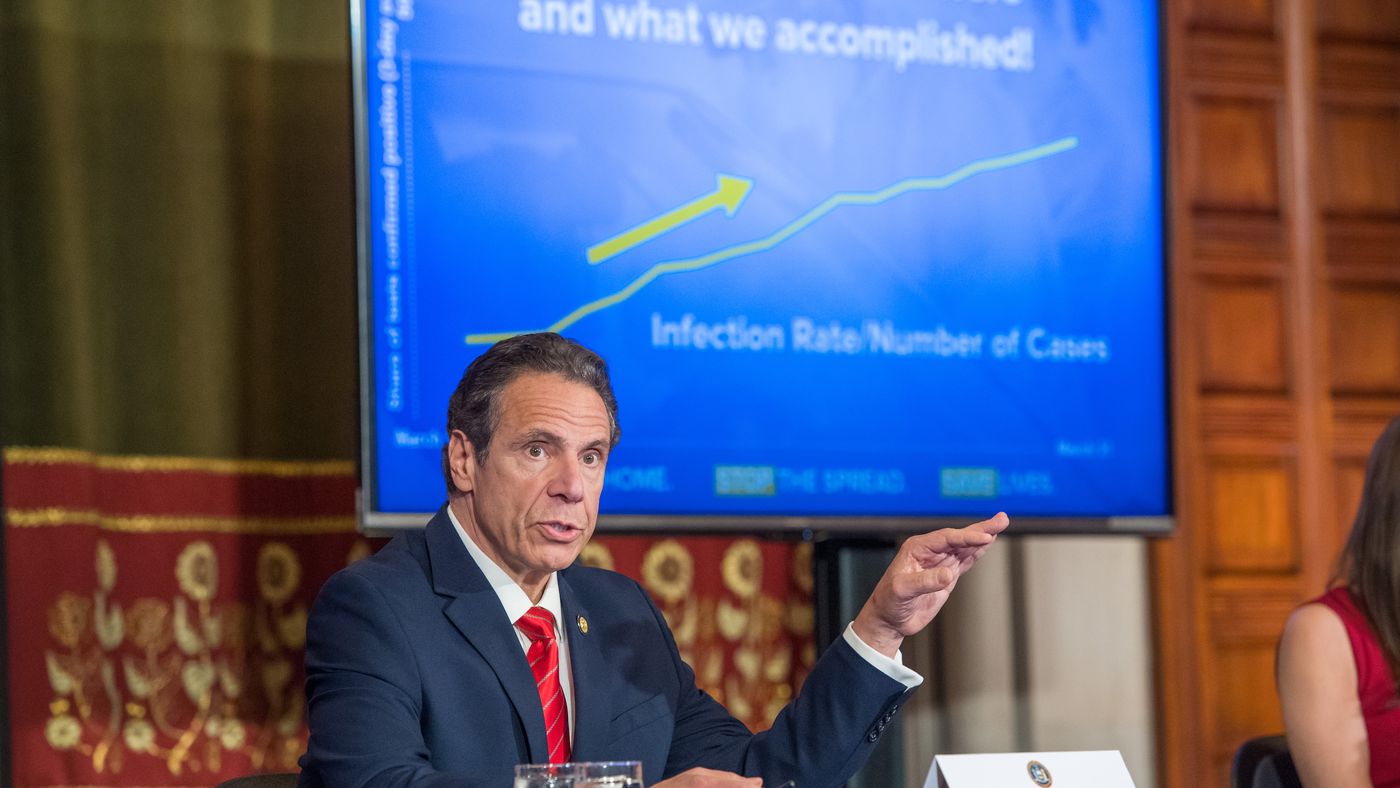 New York City was due hundreds of millions, money that could help the largest school system in the country with its ongoing transition to online instruction.

But with a stroke of Gov. Andrew Cuomo’s pen, that money was wiped away. New York state’s budget, passed in early April, included $716.9 million in federal aid for the city. The governor then cut exactly $716.9 million in state funding from New York City schools.

The move allowed Cuomo and legislative leaders to say school funding was holding steady for all, implying that school districts would equally share the pain of this economic downturn. In reality, districts with the most children from low-income families will shoulder that burden, two recent analyses show.

Those districts, which include New York City, saw state funding crater, canceling out the federal influx. High-poverty districts also got less than what they might have received had coronavirus not devastated the state’s economy, while more affluent districts are getting roughly the same.

“The big takeaway is that high-poverty districts are getting disproportionately impacted by the covid crisis,” said Drew Atchison of the American Institutes for Research, who has studied New York school funding and analyzed the budget at Chalkbeat’s request.

It makes for a stark contrast with the impassioned pitch for equity Cuomo made to state lawmakers just months ago. “It is shameful that we do not distribute the funding in the most progressive way,” he said during his state of the state address. “Fund the poorer schools, and close the education gap, and let’s do it this year.”

And yet the move was right in line with how New York and states across the country approached the fallout from the last recession — making particularly deep cuts to high-poverty school districts.

New York was one of the first states to pass a budget after this economic downturn began, and its decisions may hint at what’s coming in other parts of the country. Meanwhile, billions in additional cuts could be around the corner in New York, as Cuomo has been given unusual power to make additional spending reductions in the middle of the year.

A spokesperson for Cuomo defended the budget as the necessary result of the economic slowdown and said the state needs more from Congress.

On its face, New York state’s recently passed budget seems fair: Every district gets nearly the same dollar amount as last year. But Atchison’s analysis shows that this doesn’t tell the whole story.

He compared what New York school districts received in state funding to what they would have gotten under Cuomo’s pre-pandemic budget proposal. This offers a way to estimate how each district saw its fortunes change because of the coronavirus. (It’s not a perfect proxy, since the budget would have likely looked different after final negotiations with lawmakers.)

Atchison found that the highest poverty districts lost out the most because of the budget crunch. New York City ended up with about $900 less per student in state funding than it would have received; even with the one-time federal relief money, the city will get $200 less per student than if Cuomo’s previous proposal had been enacted. Affluent Scarsdale, meanwhile, ended up with just $15 per student less.

Rochester City schools, a district with one of the state’s highest child-poverty rates, missed out on $1,600 per student in state funding, and even with federal help is getting $230 less per student than it would have. One of Rochester’s wealthy suburbs, Fairport, actually ended up with more, counting federal aid.

Cuomo’s spokesperson criticized the comparison. “The executive budget revenue and spending forecasts have been rendered obsolete by the pandemic, and to use that spending as a comparator is disingenuous and intellectually dishonest,” said Klopott, who declined to review Atchison’s analysis.

What the comparison makes clear though, is that the state elected to take away expected resources from high poverty districts in the wake of the crisis, just as the pandemic required those districts to make extraordinary outlays for technology and meals.

“We know from all the reporting that’s going on that these ‘digital divide’ resource gaps are greatest in poorest communities,” said David Sciarra of the Education Law Center, which last month released an analysis that reached similar conclusions as Atchison’s.

This distribution of pain during a downturn is not inevitable. Michael Rebell, director of the Center for Educational Equity at Teachers College, laid out one scenario. If 90% of Buffalo’s schools budget comes from state dollars, while the same was true for 10% of Great Neck’s schools budget, it makes sense to shift some of Great Neck’s state dollars to Buffalo when broad cuts are needed, he said.

“But the legislature always goes on the basis of not wanting to rock the boat of changing what people got last year,” said Rebell, who was also the leading attorney behind the Campaign for Fiscal Equity lawsuit that created Foundation Aid, the formula that sends extra dollars to high-needs districts.

State funding streams that tend to go to more affluent districts, like property tax relief in New York, could be cut instead. Advocates have also pushed the state to raise revenue through a wealth tax.

Cuomo has rejected such a move out of hand. “The middle of a public-health crisis is not the time to be raising taxes,” said Klopott, the budget division spokesperson. But Cuomo had bristled at a wealth tax long before the pandemic, claiming it would cause high-income New Yorkers to flee the state.

If the state continues to make cuts, research, and the experiences of educators, suggest this will hurt students.

“Schools are going to need more resources to deal with the aftermath of this, not less,” said Joe Luft, who was principal of Flushing International High School in Queens during the Great Recession. “When I think of how bad that was then and how much worse I think this is, I wonder how we’ll be able to fund schools at levels that support students academically and socially.”

There are echoes here of what happened after the last recession. Atchison shows that starting in 2009, New York’s high-poverty school districts faced deep declines in state funding that took years to recover from. Affluent school districts saw only modest declines, and they were made up for by increases in local funding, mostly property taxes.

That pattern was common across the country, but it is avoidable.

Rutgers professor Bruce Baker recently released a report calling for a big package of federal aid for states, along with safeguards to ensure high-poverty districts don’t face deeper cuts than wealthier ones. “Almost all of the recommendations I made are based on what New York and Cuomo in particular did wrong last time,” he said.

Right now, Cuomo is the state’s key decisionmaker. He’s armed both with newfound popularity, thanks to his widely broadcast pandemic press conferences, and with newfound powers to cut the state budget.

“In the eight years prior to the pandemic, this administration increased school aid by more than $8 billion, with 70% of that increase directed to high-need districts,” said Klopott, the state spokesperson.

New York does spend more per student than any state in the country, and, under Cuomo, the state’s schools recovered more quickly from the recession than those in many other states. Atchison’s analysis shows that high-poverty districts eventually bounced back and saw spending grow substantially.

But Cuomo has also repeatedly dismissed the Campaign for Fiscal Equity as “ghosts of the past and distractions from the present.” And he has questioned how much money on its own matters for student learning, a view Klopott reiterated.

Two recent academic studies focusing on New York show that spending more money does lead to better results for students, results that align with national research. And the highest-poverty districts in New York state still get slightly less in state and local dollars than the most affluent districts, Atchison’s analysis shows.

For now, Cuomo continues to urge the federal government to give states more. Without that help, Cuomo has warned that the state could make cuts of up to 20%.

If that happens, Brian Fessler, director of governmental relations for the New York State School Boards Association, said he hopes the state will look for ways to avoid cutting more from poorer districts.

The article was published at Who’s being hit hardest by New York’s budget crisis? Its highest-poverty school districts.