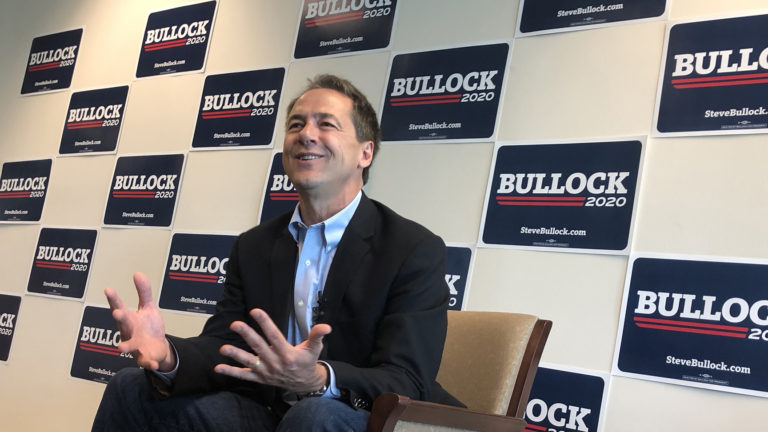 HELENA — A handful of news reporters gathered Tuesday morning in a conference room in what used to be the downtown offices of Blue Cross Blue Shield of Montana. They were there for the first press conference at the new headquarters of Democratic Gov. Steve Bullock’s long-rumored and just-announced 2020 presidential campaign.

It’s obvious Bullock has a lot of ground to make up if he’s going to close the gap between himself and the other 22 Democrats vying for the party’s nomination. If he’s going to be a serious contender for the White House, then the large, mostly empty office space will soon be bustling with an army of staff and volunteers.

“Look … this isn’t, for me, a vanity project,” Bullock told reporters. “I wouldn’t be getting into it if I didn’t think I had something really significant to offer.”

Bullock is a latecomer to the most crowded Democratic presidential primary field since 1976, when former Georgia Gov. Jimmy Carter emerged as the party’s nominee and went on to become president

“I wouldn’t write off anybody’s chances in a big field,” said Kyle Kondik, managing editor of Sabato’s Crystal Ball, a nonpartisan political tip sheet produced by the University of Virginia Center for Politics. “But part of the problem with so many candidates is it’s hard to get attention, and Bullock is someone I would say is not well-known, even in Democratic politics.”

Though he’s not widely known outside Montana, Bullock believes he has a secret weapon that will catch the attention of Democratic primary voters:

“I was the only Democrat to get re-elected in a state where Trump won,” Bullock said.

In national news stories speculating about Bullock’s candidacy, that’s the point that defines him.

In a primary where many top candidates are scrambling to tap the energy, enthusiasm, and emotion of the party’s left-wing progressive base, Bullock is seeking to carve out space closer to the middle. As a Democratic governor of a Republican-leaning state who has had to work with GOP-controlled legislatures his entire term in office, it’s a space he thinks will appeal to voters in Middle America, where Democrats lost to Trump in 2016.

“When I’d say [to people] outside of Montana, ‘You had 25 to 30 percent of my voters voted for Donald Trump,’ far too often I’d hear either, ‘What’s wrong with those voters?’ or a little skepticism, like ‘What’s wrong with you, Bullock?’” Bullock said. “Never, like, ‘How is it that, you know, the people who are voting their economic interests, their hopes for their kids, their hopes for health care, they would have been with Democrats.”

The difficulty of Bullock’s approach, Kondik said, is that the middle lane is already occupied by a far more prominent and experienced Democrat who also happens to be leading by a wide margin in early primary polling. That candidate is former Vice President Joe Biden.

“If Bullock is going to do anything, he needs Biden to collapse,” Kondik said.

While Bullock’s status as a relative unknown is an obvious handicap, he faces another hurdle: convincing Democrats that he’s better suited for the presidency than for the U.S. Senate.

First-term incumbent Rep. Steve Daines is up for reelection in 2020, and many Democrats think Bullock could be the party’s best chance of unseating Daines and inching Democrats closer to breaking the GOP’s control of the Senate.

Bullock has consistently said he has no interest in serving in that body.

“I’ve expressed all along [that] I just don’t have an interest in running for U.S. Senate,” Bullock told the Montana Lowdown Podcast in March. “I think that my skill set, and what I’ve done, I just wouldn’t enjoy it, so I’d ruled it out.”

Some Democrats think Bullock’s refusal to challenge Daines in favor of a long-shot bid for the presidency could damage Democrats’ hopes of returning Kentucky Sen. Mitch McConnell to the minority.

That sentiment has been rampant on Twitter in the weeks since MTN News political reporter Mike Dennison broke the news that Bullock was planning to announce his presidential campaign.