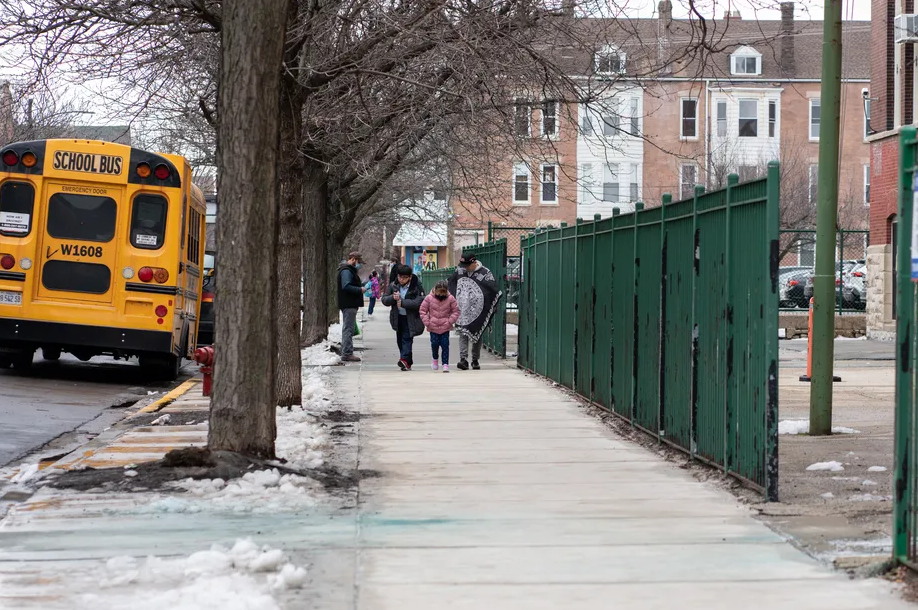 At one Chicago elementary school, educators were so concerned about some students’ lackluster attendance they created a hall of fame — a bulletin board in the main hallway recognizing students who made the most gains in showing up to school.

The school’s efforts illustrate the district’s intense focus on attendance amid the high-stakes return to full-time in-person learning this fall. In September, Chicago Public Schools leaders touted a higher-than-expected rate on the first day of the school year and during its second week, evidence that stepped-up outreach to families was paying off.

But school-level data obtained by Chalkbeat shows that campuses have continued to grapple with the plunge in attendance the district saw during remote learning last year. At just below 90%, average attendance has remained squarely below pre-pandemic levels, dipping slightly compared to the virtual first quarter period last year.

Comparing virtual and in-person attendance is tricky: Last year, educators reported that some students logged on to classes, with cameras off — but did not participate or respond to questions, seemingly tuning out the instruction. Still, these numbers are a crucial early gauge of how efforts are going to re-engage students and address the pandemic’s fallout.

Regular attendance has been especially elusive at high-needs high schools on the city’s South and West sides, with some campuses reporting average rates of 70% and below for the first quarter. However, many of those campuses have also seen dramatic jumps in attendance from last fall, increasing as many as 27 percentage points.

In recent weeks, the troubled return from winter break amid the omicron surge in Chicago and nationally has trained a spotlight on the ongoing pressures on attendance. But data from the first part of the school year — a time to build all-important bonds with teachers, school staff, and peers — is telling as well.

“We wouldn’t expect attendance to be the same as pre-pandemic,” said Elaine Allensworth of the University of Chicago’s Consortium on School Research. “It’s still a pandemic.”

Nationally, emerging attendance data is also showing that fewer students than normal are consistently coming to class. Statewide attendance in Illinois near the midpoint of the school year stood at 92.5%, almost one-and-a-half percent below the pre-pandemic rate.

Chicago Public Schools initially denied earlier in the fall a Freedom of Information Act request for attendance data, saying it did not maintain daily attendance rates by campus and was not obligated to pull the information for Chalkbeat. Eventually, the district did provide those first-quarter rates for each of its district-run campuses.

The pandemic disruption of last school year brought attendance setbacks across the country. That was especially true for high schoolers, preschoolers, and kindergartners, and for districts’ most vulnerable student groups, including children with disabilities.

In Illinois, statewide chronic absenteeism rose to 21.2% last year, up almost 5 percent from 2019. Students who are considered chronically absent miss 18 or more school days for the year. The increase was more pronounced for homeless students, those with disabilities, and especially Black students, for whom chronic absenteeism jumped from about 31% to 39% over those two years.

After years of improving attendance in Chicago Public Schools, the districtwide attendance rate dipped almost 4 percentage points during the 2020-21 school year compared to 2018-2019. But those drops were much sharper for high school students, especially seniors, whose rate plummeted 7 percentage points, dipping below 80%.

At the start of this school year, district officials celebrated a roughly 91% first-day-of-school attendance rate. Though a few percentage points lower than such rates before the pandemic, officials saw the turnout as reassuring, given the ongoing uncertainty brought by the delta surge at the time and an earlier school year start. They also noted the rate then ticked up to more than 93% in the second week of school.

However, the data obtained by Chalkbeat shows attendance waning in the later months of fall, following a long-standing pattern. It has largely remained just below the 90% mark, dipping to as low as 85% occasionally and inching up to slightly above 90% during some stretches. Schools marked students who logged on remotely after being quarantined because of COVID exposure as present.

Ongoing struggles with attendance are not surprising, notes Allensworth at the Consortium on School Research.

“This is a transition year,” she said. “Last year, we had major disruption. Now there’s this hope to go back to some kind of stability, yet there’s still all this uncertainty.”

High schools that serve predominantly Black students on the South and West sides have continued to struggle with attendance. But they also rank high on the list of campuses with the most marked attendance gains. District officials have argued that remote learning was especially challenging for the student population these schools serve.

During the first quarter of last school year, Austin College and Career Academy, with a student population that’s almost entirely Black and low-income — and in a neighborhood hard hit by COVID and an uptick in gun violence — saw average attendance of about 45%. This fall, average attendance there jumped to 73% — the most dramatic increase over last fall. Douglass, Manley and Spry — also among campuses with the lowest rates last year — also saw substantial improvement.

Overall, attendance at majority-Black schools improved the most, though it remained lower than that at predominantly Latino and white schools. Comparing this fall to the previous year, high school attendance overall rose by roughly a percentage point, to almost 84%, even as the rate fell slightly at the elementary level, to just more than 90%.

The return to full-time in-person learning has brought its own attendance challenges: A school bus driver shortage left thousands of Chicago students without a reliable ride to school this fall. Then, there was COVID and other health issues, which led to more absences than in pre-pandemic times because students are now generally discouraged from showing up to school even with mild cold symptoms.

Students grapple with COVID fears and other hurdles

At Communities In Schools, a national nonprofit that provides full-time clinicians and other support to 30 Chicago district-run and charter schools, those campuses were more focused on attendance this fall than ever before, said Lo Patrick, senior director of intensive student supports. Many schools expanded and elevated the work of their attendance teams during remote learning, and more intensive outreach to students and families has continued into this school year.

Patrick said the group’s clinicians have confronted what national experts are calling “re-entry anxiety” – a blend of COVID fears and social anxieties borne of prolonged isolation that has crimped attendance for students returning from extended virtual learning.

There’s also the ongoing work of reengaging students and helping them readjust to the routines of in-person school, including getting up, getting dressed, and making it to school on time each morning.

“This was a much bigger lift and it took a lot longer to reestablish those routines than schools were anticipating,” Patrick said.

Families have struggled to get back into routines, said Sabrina Jackson, who heads a parent mentor program at Teamwork Englewood, a community group that worked with the district last summer on family outreach.

For many, COVID fears run deep, and complaints about school cleanliness and the availability of protective equipment at some Englewood schools have added to the uncertainty. Meanwhile, student quarantines during the fall had a destabilizing effect, sometimes curbing attendance even after students were cleared to return to classrooms.

“Families were getting back into the routines, and then their kids would be quarantined,” Jackson said. “A lot of momentum is lost.”

The omicron surge this winter has brought fresh attendance challenges.

Roughly a third of district students missed the first two days back from winter break, before a standoff over COVID protocols between the district and its teachers union canceled school for five days. In some cases, they stayed away because they or their family members were sick; in others, families chose to keep students at home because of concerns about the virus’ spread.

More clarity in communicating about COVID safety and faster notification of school-based cases would help, Jackson said. She also would like to see now more of the school community building events for families many district schools held in the first week or two of classes.

At Communities In Schools, Patrick said she’s hearing about more schools that are offering classroom-level or schoolwide attendance incentives, such as the middle school attendance hall of fame. In the meantime, the group’s school-based clinicians are helping students one-on-one with re-entry anxiety, practicing breathing and positive self-talk techniques. But perhaps the most crucial work to boost attendance involves continuing to foster strong bonds between students and educators or school staff.

In a growing number of schools, all adults — from the principal to the security guard or custodian — are in charge of checking in daily with each student in their assigned groups, even if it’s just a quick hello.

“Knowing there’s a friendly face that cares about you and notices whether you are at school on any given day makes a huge difference that’s often overlooked,” Patrick said.