Home » How a South Side Chicago school increased vaccine uptake 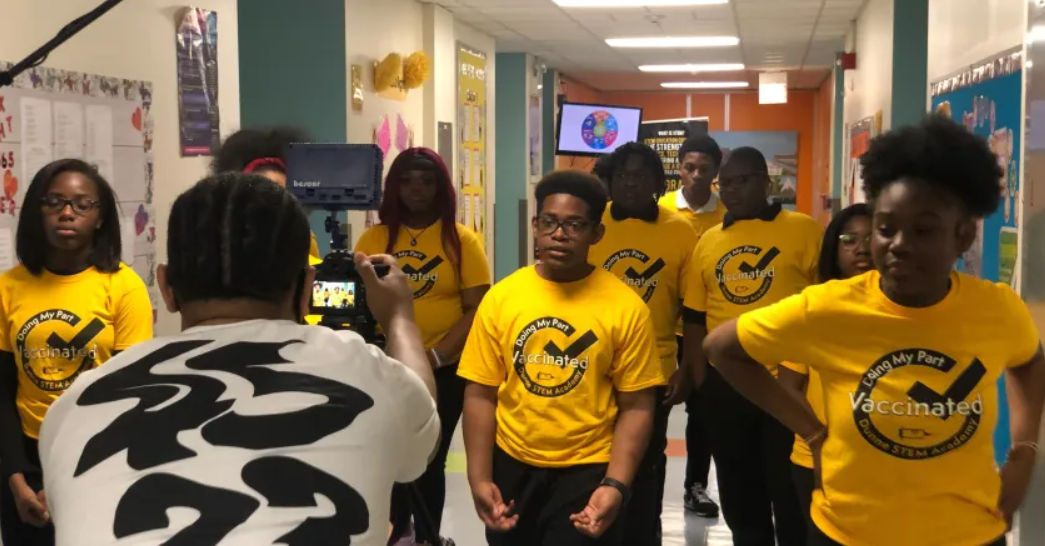 How a South Side Chicago school increased vaccine uptake

More than a dozen elementary school students, sporting bright yellow T-shirts with the words: “Doing my part. Vaccinated,” walked down a hallway at Dunne STEM Academy and recited lines while filming a public service announcement.

In take after take, students corrected one another on pronunciation and encouraged classmates to carry on if they fumbled a line. In the PSA, they shared statistics on the health impacts of COVID-19 in children and teenagers: There were more than 8,200 COVID-related hospitalizations among children as of mid-October 2021. Some suffered serious complications such as multisystem inflammatory syndrome.

Before the end of the video, a handful of students walk into the frame to proclaim: “I’m vaxxed.”

For eighth grader Nandi Guy, the goal was simple: See her peers get vaccinated.

Since the height of the omicron surge in January, the Roseland school on Chicago’s far South Side has taken an all-hands-on-deck approach to boosting COVID vaccine uptake while raising awareness and dispelling myths around the vaccine, says assistant principal Jason Davis.

Teachers made calls to students’ homes, listening to parents who were interested and others who were on the fence about the vaccine. The school provided resources around the vaccine, and partnered with faith leaders and local health providers including Phalanx Family Services. And students made a public service announcement and TikTok videos to encourage classmates to get vaccinated.

In December, only 5.4% of Dunne students were fully vaccinated. But in the last few months, the school has seen an increase in uptake to 42.3% — nearing the overall district vaccination average, data shows.

The school’s effort to increase vaccination rates was born after teachers across the district voted to walk out over safety concerns in January as COVID-19 cases hit a peak in the city. During a four-hour virtual call on a Saturday that month, teachers, administrators, and staff brainstormed ways to increase vaccine uptake at the school, Davis said.

“All this came about to make the space safer for everybody,” he said.

Across all district-run schools, the average school is 44.7% fully vaccinated, but rates vary widely. Although there has been a gradual uptick in overall vaccine rates since December, the nation’s third largest district is still struggling to make inroads at predominantly Black schools on the South and West Sides, according to a data analysis by Chalkbeat.

Asked about the vaccine disparities during a roundtable discussion at Phalanx Family Services in late April, Mayor Lori Lightfoot said it was a concern and frustration of hers.

“We have literally tried everything,” including public clinics at the local level, working with the faith community, financial incentives, and door knocks, Lightfoot said. “You name it we’ve tried it.”

“No one has figured out the secret sauce, in part, because how do you overcome the fear? What do you do?” Lightfoot said. “The only answer is a trusted community partner.”

The mayor said working past vaccine fears and hesitancy remains a “huge priority.”

“We have to keep at it,” Lightfoot said.

During the April forum, where officials announced an overall decline in life expectancy in the city — the steepest drop among Latinos, the city’s health commissioner said the biggest predictor of whether a child is vaccinated is if a parent or guardian has been inoculated. Still, Dr. Allison Arwady noted, the city continues to average about 3,000 vaccines a day, and for the past month Black Chicagoans are the most likely to be getting first and second doses.

Arwady thanked community partners for continuing their work to get more people on the far South Side vaccinated.

Neither has the Dunne community.

“It’s been a collective effort to make sure that we were all safe,” said assistant principal Davis.

The school, in partnership with nearby Allen Metropolitan C.M.E Church, hosted a vaccine town hall that included a medical doctor to answer questions and address concerns. The aim, Davis said, was to empower parents and students to make an informed decision about the vaccine.

Dunne saw about 10% of students get vaccinated following the town hall — some of whom were inoculated at a vaccine clinic held at the school, the assistant principal noted.

“This neighborhood has some reservations about the vaccine,” Davis said. “So if we have willing participants, we want to jump right in.”

David Bryant, pastor at Allen Metropolitan C.M.E., noticed a spike in interest in the vaccine following the town hall.

“We knew that education was key,” Bryant said. “It eliminates some of the fears parents have.”

The school worked with the church and Phalanx Family Services to connect interested parents with vaccine opportunities. School staff also followed up to remind parents of their child’s second dose.

“We wanted to be supportive, and make it as easy as possible,” Davis added.

Because of a long-standing relationship with Dunne, the church worked with the school to host outdoor events that included movie screenings alongside COVID-19 tests and vaccines administered by the Roseland Community Hospital, Bryant said.

About 1,000 Roseland residents, including CPS students, were vaccinated at these events, he noted.

“We were in a crisis — a global crisis — and on the local level, we had to work collaboratively to use all the resources we had,” Bryant said.

School administrators also centered student voices after a parent told staff she was leaving the decision to get vaccinated up to her child. Dunne officials held a vaccination day and a pep rally, and partnered with nearby Corliss High School students to write and create a PSA.

“We want children to share with each other the importance of vaccination,” Davis said. “It just made a world of difference.”

The church also offered a pizza party to the class with the best TikTok video. In one TikTok video, a student dances to a remix version of “Macarena” before a classmate shares a written note that says: Get the vaccine. It saves lives!

“We are thinking of creative ways to get the message out,” Bryant added.

Projects such as the PSA and interacting with classmates again have been among eighth grader Nandi Guy’s favorite parts of returning to school.

Eighth grader Michael Ealey, 13, who helped write and edit the PSA, said he feels safer knowing that about half of his classmates are vaccinated.

In reflecting on why he got the vaccine, Jaleel Clemons said he didn’t want to catch COVID-19. The 13-year-old, who had an acting role in the PSA, worried about the health risk of catching COVID while not being vaccinated.

“I want to protect my family,” Jaleel said.

With about six weeks left in the school year, assistant principal Davis says the school community is proud of the vision of principal Chandra Byrd-Wright and the hard work of teachers to get them through a challenging year.

“It couldn’t be done without the teachers,” Davis said. “Teachers did the heavy lifting — calling every parent, sometimes three times, leaving messages, following up. It was through their diligence that we were able to have the success that we have had.”

But Davis said there is still more work to be done around the vaccine.

“We are still pushing,” Davis said.