Please ensure Javascript is enabled for purposes of website accessibility New Biden rules for ICE point to fewer arrests and deportations, and a more restrained agency - THE CHICAGO HERALD Press "Enter" to skip to content 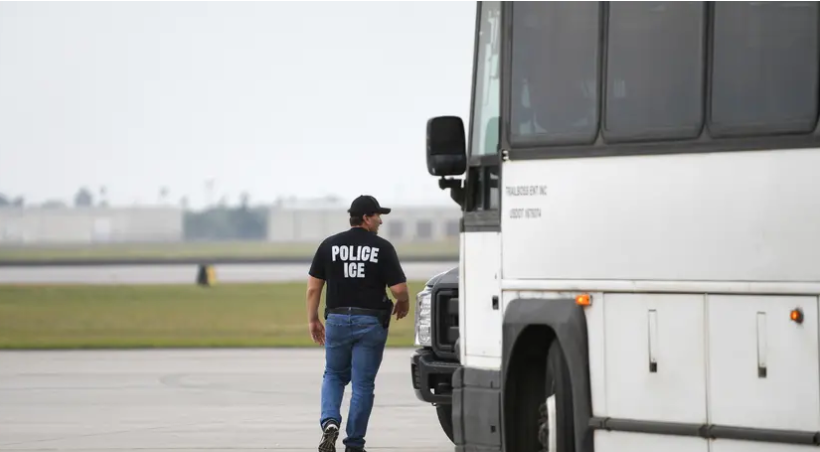 New Biden rules for ICE point to fewer arrests and deportations, and a more restrained agency

U.S. Immigration and Customs Enforcement is preparing to issue new guidelines to agents this week that could sharply curb arrests and deportations, as the Biden administration attempts to assert more control over an agency afforded wide latitude under President Donald Trump, according to internal memos and emails obtained by The Washington Post.

While ICE’s new operational plans are not yet final, interim instructions sent to senior officials point to a major shift in enforcement. Agents will no longer seek to deport immigrants for crimes such as driving under the influence and assault, and will focus instead on national security threats, recent border crossers, and people completing prison and jail terms for aggravated felony convictions.

“Generally, these convictions would not include drug based crimes (less serious offenses), simple assault, DUI, money laundering, property crimes, fraud, tax crimes, solicitation, or charges without convictions,” acting Director Tae Johnson told senior officials in a Thursday email advising them on how to operate while new guidelines are finalized.

The Biden administration is attempting to reorient ICE, a law enforcement agency that has seen its priorities swing wildly from one administration to the next. But frustrated ICE officials say the proposed changes will take away agents’ discretion and severely constrain their ability to arrest and deport criminals.

Agents seeking to arrest fugitives outside of jails and prisons will need prior approval from the agency’s director in Washington justifying the decision while explaining how the enforcement action “constitutes an appropriate allocation of limited resources,” according to a draft memo circulating at the agency.

“They’ve abolished ICE without abolishing ICE,” said one distraught official who spoke on the condition of anonymity because that person was not authorized to speak to the media. “The pendulum swing is so extreme. It literally feels like we’ve gone from the ability to fully enforce our immigration laws to now being told to enforce nothing.”

The draft guidelines are awaiting approval by Department of Homeland Security Secretary Alejandro Mayorkas, who was confirmed by the Senate on Tuesday.

ICE officials say anyone unlawfully in the United States will still be subject to arrest, including people who committed crimes and were released before the memo was issued. Crimes such as sex offenses remain a top priority, they said.

Trump made ICE a major tool of his domestic policy agenda, lavishing agents with praise and exhorting them to deport “millions” of immigrants. ICE officials said they continued to prioritize criminals under Trump, but the agency’s more aggressive enforcement posture also caused the deportation of families, business owners with community ties, and minor traffic offenders, triggering a backlash that included calls from some Democrats to “abolish ICE.”

Biden, who on the campaign trail expressed remorse for the relatively high number of deportations that occurred under President Barack Obama, pledged to rein in and reform ICE, but not eliminate it.

ICE officials chafing at the new rules under Biden say they were expecting major changes, but not the kind of restrictions on agents that have been outlined in preliminary memos and emails obtained by The Post.

The interim guidelines show how ICE’s priorities have pivoted since Biden took office.

A Jan. 20 memo issued by DHS ordered a 100-day pause on deportations — which a federal judge soon halted — and set temporary enforcement priorities while the agency underwent a review. Johnson, the acting ICE director, sought to clarify the new rules last week in an email to officials unsure of how to operate in the meantime.

Immigrants should be considered public safety threats if they have an institutional record of violent behavior, well-documented gang affiliations or aggravated felony convictions, Johnson told senior staff. Such crimes would include murder, rape, child abuse and major drug offenses, and agents should prioritize those released after the issuance of the Jan. 20 memo, he wrote.

In instances where the aggravated felony is more than 10 years old and not the reason for a recent arrest, that individual would not be considered a public safety threat, Johnson indicated. Gang tattoos or records showing “loose affiliation with gang activity” would also not meet the narrower criteria.

ICE officials said that under Trump, criminal offenders were the vast majority of those taken into custody by agents. But many of those arrested had convictions or pending charges for driving under the influence, traffic offenses and immigration violations, such as illegally reentering the country.

John Sandweg, an acting director of ICE during the Obama administration, said the preliminary guidance was a good step toward improving the agency’s public image and the quality of its work. “No one judges the FBI by the number of arrests they make. They judge them by the quality of arrests,” Sandweg said.

The narrower priorities, he said, “will focus agents on getting dangerous people off the street.”

Critics of the Biden administration counter that the Jan. 20 memo will allow thousands of people with criminal histories to remain in the United States and to possibly reoffend. Texas Attorney General Ken Paxton, a Trump ally facing state securities fraud charges himself, filed the federal lawsuit that overturned the 100-day pause, resuming deportations.

Texas has since asked U.S. District Judge Drew Tipton, a Trump appointee, to toss the entire memo, which could affect the new priorities, calling it a “total abdication of their responsibility” to enforce the law.

“Clearing enforcement actions in Washington, DC sets a tone that Agents do not have the trust and confidence of their leadership at ICE HQ or DHS and possibly higher in the chain of command,” Vitiello wrote.

Biden officials said they are not abandoning immigration enforcement and will continue to prioritize national security and public safety threats, while preventing the deportation of those who do not meet their more selective criteria.

And they emphasized that the interim guidance makes clear that anyone in the United States illegally still could be subject to deportation if an ICE officer makes the case for removing them.

Emails among senior immigration officials show them eschewing most enforcement activity while waiting for more permanent guidance to be issued in the coming days.

ICE officials also canceled Operation Talon, a nationwide operation targeting sex offenders subject to deportation that had been planned in the final weeks of the Trump administration, emails show.

A senior ICE official said the Biden administration had nothing to do with that decision. Speaking on the condition of anonymity to discuss internal matters, the official said they had not heard about the operation, but that it was possible that career staffers had planned it and set it aside while awaiting new instructions from the Biden team.

The leadership change at ICE has made the agency more responsive to the legal and immigrant advocacy groups that were shunned by the Trump administration, emails show.

When ICE scheduled a deportation flight to Africa for earlier this month, lawyers and activist groups sent urgent requests to political appointees at the White House and DHS, asking them to intervene.

Their request asked for the administration to give the deportees more time to pursue humanitarian claims in immigration courts, noting that the flight to majority-Black countries had been scheduled during Black History Month, emails show. Within hours, the acting director of ICE wrote to senior staff, stopping the deportations.

A senior ICE official declined to comment on deportation flights, because they are internal law enforcement operations.

Sirine Shebaya, executive director of the National Immigration Project, a legal aid group, said the new priorities are the “humane and right thing to do,” especially because ICE often arrests people swept up by a police system under scrutiny for targeting people of color.

“Having a deportation system that takes the worst thing people have done and makes that the fundamental criteria for whether to stay or go will continue to separate families from each other,” Shebaya said. “The question isn’t really is it this crime or that crime. It’s about how we want to relate to people who live here.”

Shebaya, one of the advocates who called for stopping the Africa flight, said people were being sent to nations where they could be killed. Among the recent deportations are a man sent to Haiti, although he had never been to that country, and a woman deported to Mexico after witnessing the 2019 mass shooting in El Paso. Advocates said they should not have been priorities.

This article was originally published on New Biden rules for ICE point to fewer arrests and deportations, and a more restrained agency