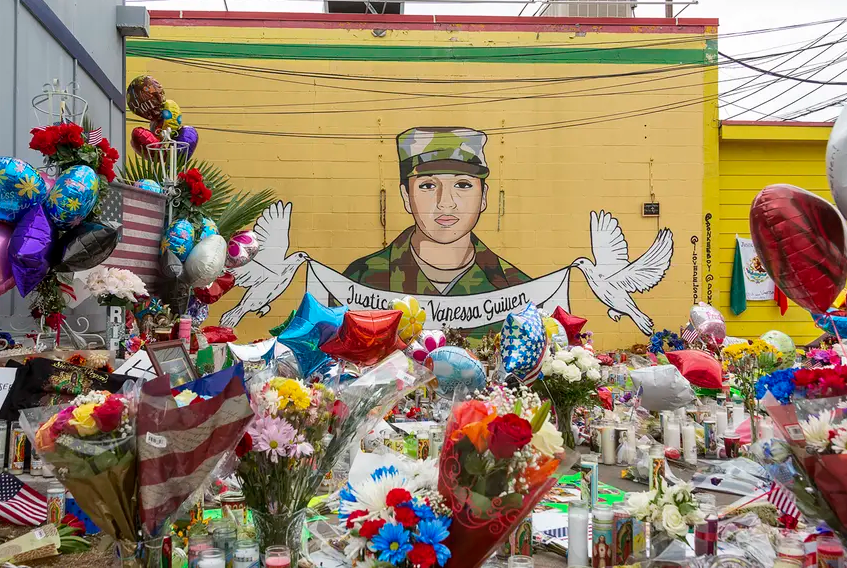 Commanders will no longer be involved in military sexual harassment or sexual assault investigations under a new federal law named for a murdered Fort Hood soldier that goes into effect on Jan. 1.

Provisions of the “I Am Vanessa Guillén Act” were included in the $770 billion National Defense Authorization Act that was signed by President Biden on Monday.

Under the new law, the decision to prosecute sexual assault and sexual harassment will be made outside service members’ chain of command and they will be offered protections against retaliation. A similar state law, filed by state Sen. César Blanco, D-El Paso, was passed and signed into law last summer.

“We literally moved the mountain here,” said Natalie Khawam, the attorney for the Guillén family..

The federal legislation also moves prosecution authority for other offenses — including murder, kidnapping, domestic violence and child abuse — to independent prosecutors. For these cases, it also establishes sentencing to be made by judges as well as sentencing parameters. Previously, sentences could have been recommended by panels of officers who often had no guidance on minimum sentences.

The law is named for Houston resident Vanessa Guillén, who was a 20-year-old Army private first class stationed at Fort Hood when she disappeared in April 2020. Her family immediately raised the alarm, saying Guillén had told them she had complained of being sexually harassed by another soldier before she disappeared.

Her remains were discovered two months later in Bell County. The murder prompted calls for reform from her family and members of Congress about the way harassment and assault in the military are handled.

The investigation and search for Guillén in 2020 zeroed in on Army Spec. Aaron Robinson, who was initially detained by military investigators, then slipped from the Army’s grasp and eventually killed himself as police moved in to arrest him. Fourteen Army leaders were eventually fired or suspended following an investigation into how sexual harassment and sexual assault were investigated. The move was prompted by Guillén’s death.

Robinson’s girlfriend, Cecily Aguilar, remains the sole defendant charged in Guillén’s murder and she is currently fighting the indictment. Her next hearing in federal court is Jan. 20.

“I don’t think many people outside the military understand the precipice these victims experience,” Khawam said about retaliation against sexual assault victims. “Not only do they get harassed or assaulted, but they get treated like they’re a liar, getting ousted, blackballed.”

The act also criminalizes sexual harassment within the Uniform Code of Military Justice, moves prosecutorial decisions in cases involving retaliation to a special prosecutor and establishes annual reporting on retaliation to Congress, which provides greater oversight.

“I know in my heart that were it not for the tireless, passionate and dogged work of the Guillén family, this reform likely would not have been possible,” said U.S. Rep. Jackie Speier of California, the law’s co-sponsor who also serves on the House Armed Services Committee.

Moving prosecutorial decision-making on these cases from the power of commanders to an independent office is a monumental change for the American military justice system, but it is one of the changes that retired Air Force Col. Don Christensen, president of Protect our Defenders, has been working on for years.

“Right now, we know from surveys that retaliation is through the roof,” said Christensen, whose organization works to end sexual violence, misogyny, racism, sexual prejudice and retaliation in the military. “The military’s biannual survey asks about retaliation. In the most recent one, more than 60% of men and women who reported sexual assault said they experienced retaliation.”

While Christensen is celebrating many provisions of this act, other changes that his organization has advocated for are missing from the act.

“We have a real problem with victims getting access to basic information to documents, that their attorneys often need to get their case to trial,” Christensen said. “It’s very hard for victims to get a copy of their own statement that they provide to investigators, hard to get rape kit results, whether accused DNA was found, results of exams on their own phones.”

For Khawam, the act is missing a measure that would allow victims to file a claim against the Department of Defense if there was a sexual assault and it was found that misconduct occurred.

This change for the U.S. military is not unprecedented. In November, Canada’s defense minister moved prosecutorial decision-making for sexual assault cases from military to civilian courts, and similar requests have been made in the United Kingdom, where just 9% of military rape cases result in a conviction.

This article was originally posted on New law named for Vanessa Guillén will revamp military investigations into sexual assault, harassment