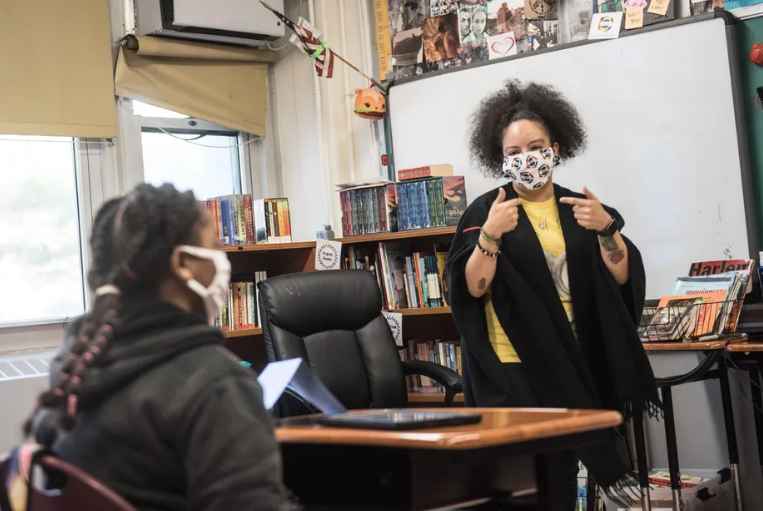 New York’s prospective teachers may no longer be required to take a controversial national assessment to get certified, according to a state proposal unveiled this week.

State education officials are proposing to remove the exam known as the edTPA, and would instead require teacher preparation programs to come up with a replacement.

The edTPA aims to assess the skills needed for high quality instruction based on a portfolio of work from would-be educators, including video recordings of them teaching, their lesson plans, analyses of their students’ learning progress, and reflections of their classroom practices. The exam, administered by testing company Pearson, comes with a $300 fee.

The exam’s critics worry it is a barrier to diversifying the teaching workforce and is exacerbating teacher shortages. New York state officials said Black test takers were nearly twice as likely to fail the edTPA compared to their white or Hispanic peers, Chalkbeat reported in 2017. (At the time, a Chalkbeat analysis found that people of color also disproportionately failed other certification tests.) Hispanic teacher candidates in Washington state — which was first, along with New York, to require the edTPA — were more than three times as likely to fail the exam when compared to white candidates, a 2016 study found.

New York officials declined to provide the latest pass-fail data for the edTPA.

If the Board of Regents approves the proposal, teacher preparation programs must come up with an assessment that has multiple ways of showing that candidates are meeting state teaching and learning standards, based on the grades and subject area they want to teach. Programs can still opt to use the edTPA.

“I think this is a very good move,” said Regent Kathleen Cashin, who is from New York City and has long raised concerns about the certification exam. “We’re also keeping choices on it — they can keep it if they want to keep it.”

The proposal, lauded by the state teachers union, is the latest way the state has tried to reform teacher certification in recent years. State officials stressed that it is not meant to water down the requirements for becoming a teacher, but rather, to give teacher prep programs the chance to “customize” assessments while still meeting state standards.

The Regents likely won’t vote on the proposal — which is now out for public comment — until April, at the earliest. If the proposal passes, educator preparation programs must choose or develop a new assessment by September 2023.

Issues with the exam have cropped up for years since New York first made it a requirement in 2014. Teacher preparation program leaders and school district officials criticized the test for becoming “the primary focus” of student teaching, drawing attention away from other parts of their programs.

It is also too expensive for many students, said William Murphy, the state education department’s deputy commissioner of higher education.

State officials also found that some students, who often take months to prepare for the exam, are unable to complete the test before they’ve finished their program.

“There are a number of different challenges associated with this model,” Murphy told the board.

The Regents have made some changes over the years to ease the edTPA requirement, including lowering the passing score for the exam and allowing out-of-state teachers one year to take the test. But the pandemic highlighted the issue further. In response to the public health crisis, the state education department allowed teaching candidates to take a written exam in lieu of the edTPA. It was a change that teacher prep program leaders embraced, leading them to ask for the removal of the test requirement, Murphy said.

Dan Goldhaber, one of the authors of the 2016 Washington study, said there were also concerns the test might deepen teacher shortages in particular subject areas.

The study also found that the scores on the exam are “highly predictive” of whether a test taker remains a teacher the following year — the higher the score, the more likely it was that a teacher stayed.

Goldhaber said it was unclear whether New York’s approach would lead to better qualified teachers, since the assessments would vary from program to program. State oversight of the programs will remain important, he suggested.

“The cynical take is that this is a compliance exercise, and it’s just about guaranteeing to the public that there is a pre-service assessment, and that teacher candidates who are in the workforce have all passed it,” Goldhaber said.

New York’s Office of College and University Evaluation is charged with ensuring the state’s teacher preparation programs are meeting regulations and standards, according to a department spokesperson.

Teaching candidates will still be required to complete the rest of the requirements for earning their certifications, including coursework, other exams, and student teaching.  Exam pass rates are considered one indicator of how effective a teaching program is, a state education spokesperson said.