Please ensure Javascript is enabled for purposes of website accessibility Why is TikTok Partnering with Oracle? - THE CHICAGO HERALD Press "Enter" to skip to content

Home » Why is TikTok Partnering with Oracle? 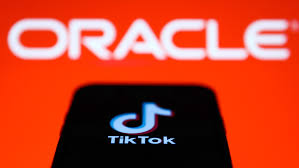 Why is TikTok Partnering with Oracle?

What You Need to Know First

Oracle is a software company that distributes and sells technology for cloud systems and databases. This American corporation specifically works to provide date recording security.

TikTok, as many of you know, is the trending, video-sharing app from China. The internet service company that owns this popular social network is a Chinese company called ByteDance.

TikTok has over 80 million active users a month in the U.S. and is continuously to be a leading social network for people to create their own 60 seconds video.

Why is it so popular?

The users. The users constantly are sharing other users’ videos and ultimately making trends across the nation. Whether it be funny skits, cooking tutorials or dance offs people are actively using the app to share.

Like every app you download there are security and privacy agreements you must agree with when becoming a user. In the previous months, TikTok was questioned and concerned with issues of possible user data and privacy being infiltrated by foreign intel.

Well, because of the much debate, President Trump issues an executive order to have TikTok make a deal with a U.S. software corporation to basically handle U.S. user data of TikTok. This assures the data of people using TikTok in America not being vulnerable and susceptible to the other concerns the U.S. government had before.

Once Oracle was determined to be the business partner, TikTok addressed the position of the national security concerns in a proposal to the Treasury Department:

“This proposal would enable us to continue supporting our community of 100 million people in the US who love TikTok for connection and entertainment, as well as the hundreds of thousands of small business owners and creators who rely upon TikTok to grow their livelihoods and build meaningful careers.”

Although this proposal stemmed from the goal to keep TikTok in the U.S and appease the concerns of the Trump Administration, there is still much to consider.

Sub-shares, subsidiaries, and other fire wall actions must be brought upon the government’s approval with ByteDance.

Now, that is where Oracle must bring to light both the national security concerns and the agreements of TikTok and ByteDance itself.

Ultimately, the government must approve the bid that Oracle finds to bridge the concerns and agreements.

There are no specific measures that Oracle is enacting yet because the decision from Trump still awaits.

With that being said, we can only hope that the developer software company can be a partner to both the nation and TikTok… for the sake of the many, many users of the app.

The Herald
More from NewsMore posts in News »