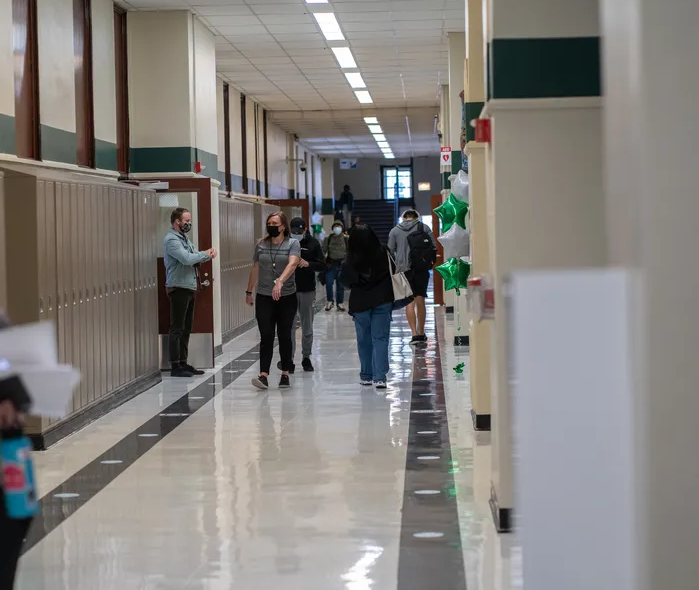 Nearly 1 in 5 Chicago high school students were absent from in-person and virtual classes during the first week of the district’s long-awaited high school reopening, with Black and Latino students missing at higher rates, according to data released Wednesday.

Those figures highlight a troubling trend: District officials had argued that a fall dip in attendance for Black high students was a key reason to push for reopening school buildings in early 2021, but initial data show that there continue to be racial disparities in school attendance.

Overall, about 19% of students were absent, 70% of students learned remotely, and 11% of the district’s 72,600 high school students were present in school buildings the week of April 19, according to data released for the first time at Wednesday’s Board of Education meeting.

Absent student figures show clear racial disparities: an average of 25.6% of Black students and 19% of Latino students were absent that week, compared to 10% of white high school students. The school district is predominantly Black and Latino.

Calculating average daily attendance is a complicated endeavor. The district’s numbers reflect the average attendance over the entire week because, under Chicago’s three-tiered high school reopening schedule, all Chicago high school students learn virtually at least one day a week. Of open high schools, 37 schools brought students back four days a week, and 50 have students coming in two shifts for two days each. No schools brought students back only one day a week — an option for schools with the most students returning — but the district’s most popular selective-enrollment high school is considering it.

Elementary and middle school students, whose buildings reopened under a hybrid model (or full week for prekindergarten and some special education students) earlier this year, saw higher attendance numbers. District figures show that during the week of April 19 an average of 26% of students attended in-person school, 67% were remote and 7.5% were absent.

The question of how to best engage absent students has been an urgent one in Chicago since last spring. School principals have been on the front lines of finding disengaged students, making repeated phone calls and in some cases even sending staff out to families’ homes.  District officials also debuted a $24 million trauma support program last month that they say will train existing school staff to better assist struggling students.

In a press conference Wednesday before the board meeting, and in public comment, parents and students called for increased investments in trauma-informed care and counselors for students.

“If you lack motivation, you are not going to be doing well academically,” said Halima Ahmed, a 10th grader from Rogers Park’s Sullivan High School, who spoke at the board meeting and asked that the school district spend some of its federal stimulus dollars to establish mental health clinics in schools that would provide access to trained therapists.

Catlyn, a Chicago Public School student and youth organizer with the “Cops out of CPS” campaign, who spoke at a morning press conference of community groups calling for a say in how federal stimulus funds would be spent, said, “It is a reality that students find it hard to be attentive and present in class.”