Home » After Chauvin guilty verdict, teachers and students look to the work ahead 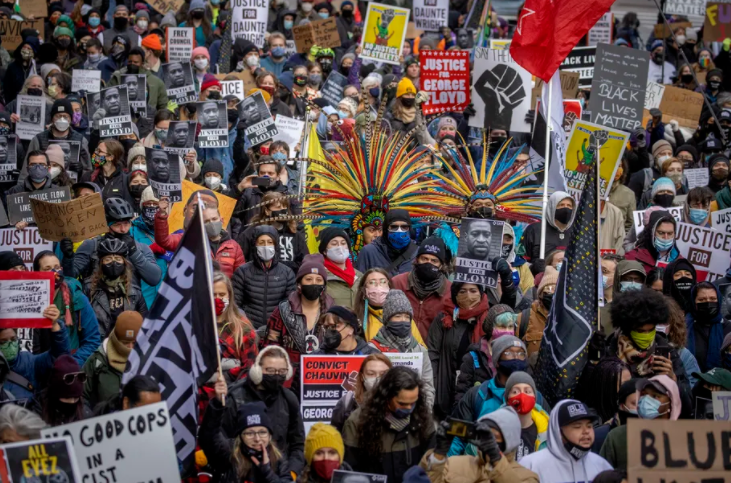 After Chauvin guilty verdict, teachers and students look to the work ahead

After a jury found former Minneapolis police officer Derek Chauvin guilty in the death of George Floyd Tuesday, educators across the country prepared to help students make sense of this pivotal moment in U.S. history.

The verdict — the culmination of a case that kicked off a historic wave of protests against police brutality and racism — brought some relief that Chauvin would be held responsible for a death that came to symbolize racial injustice in America. But students and educators acknowledged that the larger struggle persists, as the recent deaths of Daunte Wright, shot by a police officer in a Minneapolis suburb, and 13-year-old Adam Toledo, shot by a police officer in Chicago, have underscored.

The jury found Chauvin guilty on all three counts he faced, including second-degree murder, in the May 2020 death of Floyd, a 46-year-old Black man. Bystander video showed Chauvin, who is white, pinning Floyd to the ground with his knee for nearly nine and a half minutes as onlookers yelled for the officer to stop.

“I want to say that it’s a relief, but I also know that it’s not the end,” said Makiah Shipp, a freshman at the University of Michigan who graduated from a charter school in Detroit last summer. “The guilty verdict should have been an expectation and it wasn’t, and that’s how we know the problem is in the system.”

Floyd’s death and the subsequent protest movement prompted many Americans, including educators and school administrators, to examine their own biases. Some school districts promised to reevaluate relationships with school police, reflect on how racism plays out in schools, or overhaul reading lists and curriculums with an eye toward diversity and inclusion.

Late Tuesday, teachers across the nation were scrapping their lesson plans and preparing to discuss the historic verdict in classrooms and over Zoom.

Robert S. Harvey, the superintendent of the East Harlem Scholar Academies network, was working on an email to his staff within minutes of the verdict being read. He wanted to give his teachers tips for tackling the news in the classroom, with suggestions to compare this moment to other historic trials and to leave room for students, many of whom are Black and Hispanic, to feel some joy.

He hopes to check in with his staff, too, and give them time to process the news, including offering time off to people who may need it.

“The arc of the moral universe bent a little,” he said. “Tomorrow may not need to be teaching as usual.”

Moni Woweries, an eighth grade English and social studies teacher at ReStart Academy in the Washington Heights neighborhood of Manhattan, will take a similar approach. She plans to talk about the verdict Wednesday with her students — middle and high schoolers who are behind on credits — for as long as they want.

“This is such a big moment,” she said. “How important is it, in that moment in time, to form memories and make sense of what happened?”

Students played a major role in protests throughout last summer in the wake of Floyd’s death. And ahead of the verdict, students across Minnesota participated in walkouts Monday to protest police brutality both in Floyd’s death and the recent killing of Wright.

On Tuesday, in his living room in Chicago’s Back of the Yards neighborhood, Mateo Curiel and his mother turned on the television and waited for news of the verdict. When it arrived, Curiel, a junior at Back of the Yards High School, felt a flood of relief.

Curiel has followed developments in Chauvin’s trial closely — an experience that in recent weeks has been overshadowed by Toledo’s death in neighboring Little Village. For Curiel and some of his classmates, that shooting has brought what some might have once considered a Black issue squarely home for the local Latino community.

“My classmates and I have been in shock that a life can be lost in a matter of seconds,” he said. “It’s been heartbreaking.”

Curiel became interested in student advocacy after Floyd’s killing last spring, and he says he has sought out opportunities to speak up on both police violence and LGBTQ issues since, often with support from a civics teacher at his school. He said he feels inspired to step up his activism in the aftermath of the verdict.

“I hope George Floyd’s family is able to find resolution and peace, and we as a country are able to make change,” he said.

Still, the moment is a complicated one. Mendy Mendez Ventura, who lives in the Bronx and graduated last year from Manhattan’s Vanguard High School, said he knows the verdict leaves the structural issues that led to Floyd’s death largely unresolved.

“It still stands that this is a systematic issue across the nation, and no real changes are being done for the most part,” he said. “All of the people who were involved in police shootings during the Chauvin process — when are those people going to see justice?”

Mendez Ventura suggests that teachers who want to have conversations with their students in the coming days tread carefully.

“It can hit a little close to home for students,” he said. “Be mindful that some students might not want to participate.”

Some teachers said they recognize they need to be sensitive to the trauma in their students’ lives. Angela Crawford, who teaches 11th and 12th grade English at Martin Luther King High School in Philadelphia, says she will “never have a script” for conversations like this. When she addresses the verdict, she will offer space to her students, many of whom have lost friends or relatives to violence close to home.

“I know some kids are like, alright that’s George Floyd, but we have people in Philly getting killed all the time, like my homeboy was killed or I just lost my friend,” she said. “When are they going to find the people who killed him?”

Andrew Darling, a performing arts teacher at KIPP Thrive Academy in Newark, was planning lessons Tuesday evening when he saw the news on Facebook. It was not the verdict he expected.

Last summer, Darling had joined a massive rally for Floyd in Newark. During the protest, he and some fellow educators formed a circle and sang the words of a spiritual, “Oh Lord, hear my prayer.” But even as they prayed for justice, Darling wasn’t counting on it.

So he was somewhat shocked Tuesday — both by the verdict, and the sense of optimism he felt for his kindergarten students.

In his mind, he already was planning the lesson he would give his young students about the Black Lives Matter movement, Floyd’s death, and the jury’s decision to hold his killer accountable. And he decided to teach them an anthem from an earlier civil rights movement: a song called, “Oh, Freedom.”

Charlene Dixon, the principal of KIPP Life Academy in Newark, listened to the verdict as she was driving home from work and strategizing with her assistant principal. It came as an unexpected relief. Dixon remembers how it felt to watch Los Angeles police officers be found not guilty in the beating of Rodney King when she was 11.

For Wednesday, she’s keeping in mind the image of Floyd’s former second grade teacher, who shared a picture and essay Floyd wrote about wanting to be a Supreme Court justice. Dixon wants her own staff to spend part of their usual morning meetings with students asking not just how they’re feeling about the trial, but about their hopes and dreams for themselves.

“It’s so important that we don’t just see kids as who they are in the moment, but who they can be and who they will be, and allow them the space to define that for themselves,” she said.

At the University of Colorado Boulder, the verdict only brought a momentary feeling of relief for senior Isaiah Chavous, one of three student body presidents at the campus.

Since Floyd’s murder, Chavous and the University of Colorado Student Government have worked with the school’s administration to create on-campus police reform changes, including a recent agreement to form a police oversight board.

He said he’s overwhelmingly seen students at CU Boulder agree that change needs to occur and faculty come together to help students discuss systemic racism. But the verdict represents only one moment, not the change that many have fought for, he said.

Chavous said he’s tried to understand various sides of the issue of police reform, but also the need to grapple with racist systems that affect him as a person of color.

“It’s important for everyone to know that the conversation needs to carry forward,” he said. “This is only a temporary win. And so we’re pushing for the systemic win for that long-standing change.”

This article was originally posted on After Chauvin guilty verdict, teachers and students look to the work ahead