Please ensure Javascript is enabled for purposes of website accessibility Alliance of Texas environmental, oil interests block bill that would have given nuclear waste company a financial break - THE CHICAGO HERALD Press "Enter" to skip to content

Home » Alliance of Texas environmental, oil interests block bill that would have given nuclear waste company a financial break 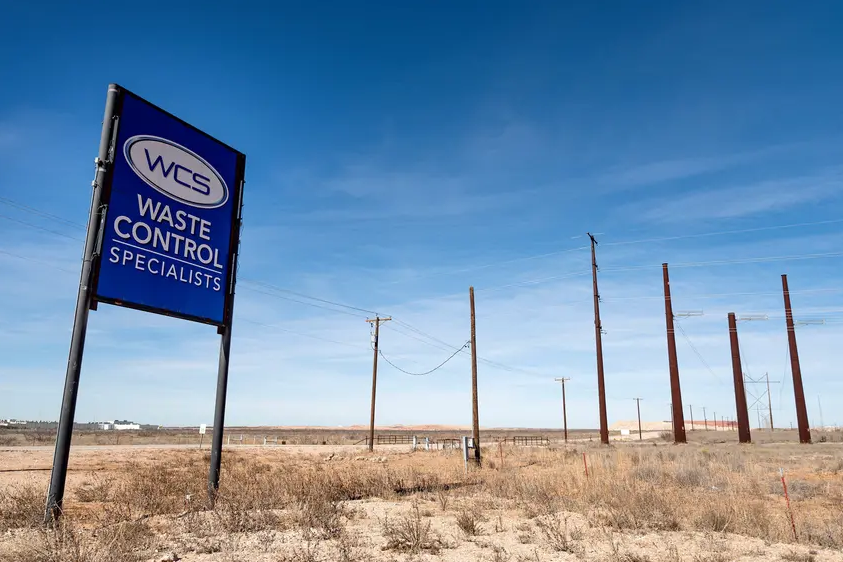 Alliance of Texas environmental, oil interests block bill that would have given nuclear waste company a financial break

A bill opposed by both environmental and some oil interests that would have given a nuclear waste company in West Texas a big break on state fees failed to receive a vote in the Texas House before a key deadline on Monday.

House Bill 2692, which also would have banned the most dangerous type of radioactive waste from entering Texas for disposal under state law, was blocked from advancing by a point of order brought by state Reps. Tom Craddick, R-Midland, and Harold Dutton, D-Houston.

It was sent back to committee and has failed to be voted out a second time before Monday, the last day House committees could report measures and have a chance of passing.

State Rep. Brooks Landgraf, R-Odessa, whose district includes Andrews County, where the nuclear waste company Waste Control Specialists operates, had sought in the legislation to stop a plan to build a 332-acre site in West Texas near the New Mexico border to store the riskiest type of nuclear waste: spent fuel rods from nuclear power plants, which can remain dangerously radioactive for hundreds of thousands of years.

But opponents of the bill — including Craddick, whose district is nearby — said the legislation wasn’t strong enough to stop the federal government from forcing Texas to take the dangerous materials. Opponents believe the primary purpose of the legislation was to give the company a break on fees it pays for its existing lower-level radioactive waste disposal facility.

“This legislation would have not added the protections needed to prevent a high level radioactive waste ban in Texas,” Craddick wrote in a statement saying he “killed” Landgraf’s bill. “Walking back on a promise to the Permian Basin is not an option.”

Craddick and Dutton — who is known for bringing successful points of order — blocked the bill on the grounds that the bill’s analysis does not adequately explain the legislation. Landgraf appeared taken aback by the opposition and apologized to the House for taking up time on what he thought would be a bipartisan bill to ban high-level nuclear waste from coming to Texas.

“It was never my intention for this bill to be a contentious issue,” Landgraf said. He said that “stakeholders” agreed to the language in the bill in March.

Waste Control Specialists has been disposing of the nation’s low-level nuclear waste, including tools, building materials and protective clothing exposed to radioactivity, for a decade in Andrews County. The company is currently pursuing, with a partner, a federal Nuclear Regulatory Commission license to store spent nuclear fuel on a site adjacent to its existing facility, a plan that both environmentalists and some oil companies that operate in the region have long opposed.

Landgraf’s bill would have reduced some state fees on the existing lower-level waste facility. With states in Texas’ radioactive waste compact, which currently include only Texas and Vermont, the bill would have eliminated a 5% fee that now goes to Texas and cut the fee on waste from other states from 20% to 5%.

In a written statement, Waste Control Specialists president and chief operating officer David Carlson said the company remains “committed to working closely with our community, our regulators, and the State of Texas to ensure the facility remains viable, safe, and an asset to the state and the state’s economy,” and thanked Landgraf for his work on the legislation.

Environmental and consumer groups opposed the bill along with the state’s GOP, which called it a “bad bill” and “terrible” for communities in an April 29 tweet from the party’s official account.

Adrian Shelley, director for Public Citizen, an Austin environmental and consumer advocacy group, said the fee reductions were his primary concern because it would have left the state with less money to clean up the site if an accident ever occured. “The bill, front and back, was pretty concerning,” he said.

It’s not the first time elected officials have blocked a fee reduction for the company in the Legislature. In 2019, Gov. Greg Abbott vetoed a widely supported bipartisan bill to protect domestic violence survivors because an amendment was erroneously added to delay an increase to a surcharge and state fee paid by Waste Control Specialists.

Opponents said they are concerned that the idea to reduce fees on the facility is not dead; until the Texas Legislature adjourns on May 31, lawmakers may still file last-minute amendments or emergency legislation.

“We expect [Waste Control Specialists] will try to sneak it in somewhere, somehow, again, like they did last session, when they snuck it on to the domestic violence bill,” said Karen Hadden, the executive director of the Sustainable Energy and Economic Development Coalition, an alliance of businesses and organizations that opposes the nuclear waste facility.

In a statement to the Tribune, Landgraf said he has other important work to focus on this session.

“It is highly unlikely that a statutory ban on the disposal of high-level radioactive waste in Texas, or any other provisions contained within HB 2692, will be achieved this legislative session,” Landgraf said.

This article was originally posted on Alliance of Texas environmental, oil interests block bill that would have given nuclear waste company a financial break