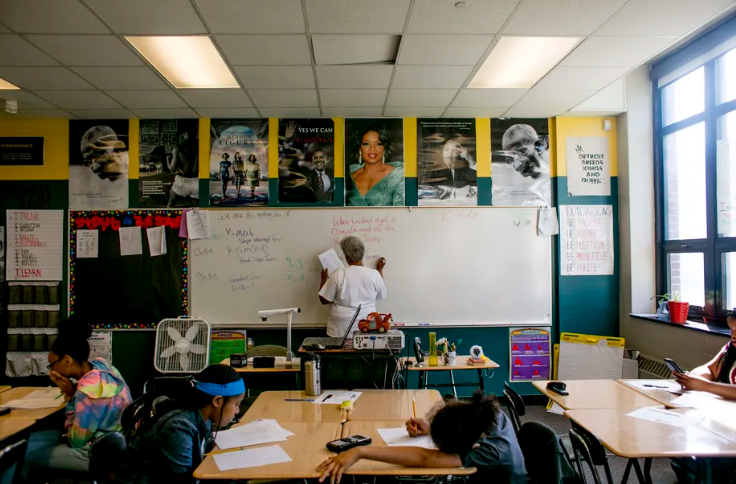 Key policies designed to support Michigan teachers aren’t being adequately enforced, according to a recent audit by the state’s Office of the Auditor General.

Districts spotlighted in the audit couldn’t prove that new teachers had been assigned mentors or that teachers’ annual evaluations were based on a classroom visit — both of which are legal requirements.

Michigan is grappling with high rates of teacher turnover, especially in low-income communities. Some experts predict a mass exodus from teaching after a grueling pandemic year. In a recent report, Chalkbeat used a trove of state data to document the toll that teacher departures take on student learning. But the audit, published last week, calls into question whether existing policies designed to retain teachers are being adequately enforced.

“If the laws and the rules are all set up, but no one is checking to see if the rules are being followed, how can [the state] achieve its goal of retaining teachers?” said Craig Thiel, research director for the Citizens Research Council of Michigan, a nonpartisan think tank that has reported on problems in the state’s teacher workforce.

Auditors surveyed thousands of teachers and examined records from randomly selected school districts from the 2015-16 through 2017-18 school years. They found:

The Michigan Department of Education agreed with the audit findings. In a response, department officials said they hadn’t had enough staff to provide the required oversight.

“We have a teacher retention problem here in Michigan and the kinds of things that are touched on in this audit are key strategies to improving teacher retention,” said Leah Breen, director of the Office of Educator Excellence, an arm of the state’s education department that is responsible for overseeing and supporting teachers in Michigan.

Breen said the department will offer new guidance to districts on requirements around teacher certification, evaluation, and mentorship.

And, in a further response to the audit, the department will conduct its own audits of districts’ handling of those issues beginning this fall. Breen said her staff will have to cut back in other areas to complete the audits, but said that it’s not clear yet what those areas will be.

Breen said that the discrepancies uncovered by the audit weren’t just a matter of missing paperwork. In some cases, she said, teachers were not being given the help that the law guarantees them.

“I think it’s probably both, she said. “There are definitely instances where mentors are not being assigned.”

Breen pointed out that the state does not provide funding to school districts to pay teachers for the additional work of mentoring new teachers.

Oversight of the teaching profession in Michigan has fluctuated over the last decade. An audit in 2011-2012 found similar problems to the new one, prompting the state to increase its enforcement of teacher support laws. A few years later, another audit found that districts were doing much better at documenting teacher training and mentorship. At that point, the department of education stopped auditing districts on this subject, and compliance fell off again.

Rep. Regina Weiss, a Democrat from Oak Park who was formerly a high school social studies teacher in Detroit, said she did not recall being assigned a mentor when she entered the classroom for the first time in 2011, as required by law.

She added that the state’s teacher training system, in particular, can be burdensome to teachers. Indeed, a quarter of teachers surveyed by the Auditor General said they were “dissatisfied” with training provided by their districts.

“It’s a missed opportunity,” she said. “It is helpful for teachers to be able to go to trainings, but I really do think it becomes just a box-checking exercise.”

This article was originally posted on Amid high teacher turnover in Michigan, audit finds failings in teacher support systems