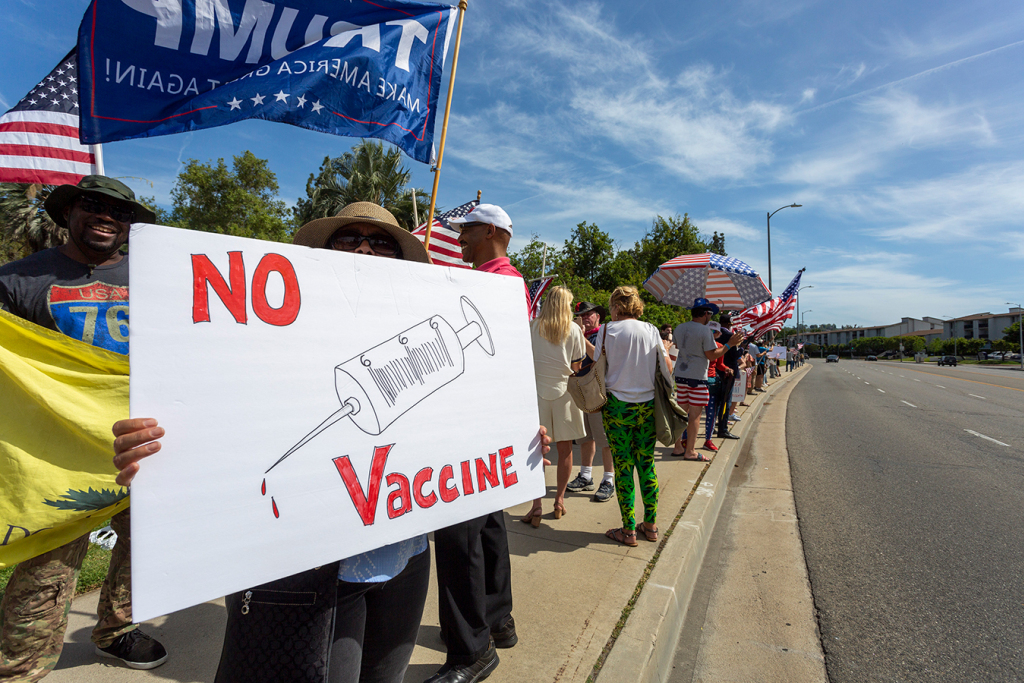 Anti-vaccine groups are exploiting the suffering and deaths of people who fall ill after receiving the covid vaccine, threatening to undermine the largest vaccination campaign in US history.

In some cases, they are making up stories of death that never happened.

“This is exactly what anti-vaccine groups do,” said Dr. Peter Hotez, infectious disease specialist and author of “Preventing the Next Pandemic: Vaccine Diplomacy in a Time of Anti-Science . “

Now, the same groups blame vaccines for medical problems these patients already have, even when it is clear that age or underlying health conditions are to blame, Hotez said.

As more older people get their first doses, many will inevitably suffer from heart attacks, strokes and other serious medical problems, not related to the vaccine but rather to their age and deteriorating health , said epidemiologist Michael Osterholm, director of the Center for Infectious Disease Research and Policy at the University of Minnesota.

For example, in a group of 10 million people, roughly the number of Americans who have been vaccinated so far, nearly 800 people between the ages of 55 and 64 typically die of heart attacks or coronary heart disease in one week, Osterholm explained.

Public health officials are “unprepared” for the oncoming flood of news and social media stories, he warned.

“The media will write a story that John Doe received his vaccination at 8 am and at 4 pm he had a heart attack,” Osterholm said on his weekly podcast . “They will make assumptions that it is cause and effect.”

Public health officials must do a better job communicating the risks, real and imagined, of vaccines, said Osterholm, who has been advising President Joe Biden on the pandemic since his election.

Anti-vaccine groups like the National Vaccine Information Center and the Children’s Health Defense , founded by Robert F. Kennedy Jr., are already stoking fears about a handful of deaths , mostly in Europe, that have followed the worldwide rollout of immunizations.

In a blog , Kennedy poked fun at the autopsy results that concluded that the death of a Portuguese woman was not related to a vaccine. He questioned statements by Danish medical authorities who said that the deaths of two people after being vaccinated were due to age and chronic lung disease.

In an interview, Kennedy said the post-vaccination deaths of some very frail and terminally ill patients in Norway, who lived at home, are a danger sign. Norwegian officials have said these patients died from their underlying illnesses, not from the vaccine.

“The coincidence is proving to be quite lethal for recipients of the COVID vaccine,” Kennedy wrote. He described the deaths as suspicious, accusing medical officials of following an “all too familiar vaccine propaganda guide” and “strategic ruses.”

Here in the United States, vaccine opponents have taken advantage of the tragedy of Dr. Gregory Michael , a 56-year-old obstetrician-gynecologist from Florida, to cast doubt on the safety of vaccines and government oversight.

Michael died on January 5 after suffering a catastrophic drop in platelets, elements in the blood that control bleeding, suggesting that he may have developed immune thrombocytopenia .

According to a Facebook post from his wife, Heidi Neckelmann, doctors tried a variety of treatments to save her husband, but none worked.

A spokesman for the Centers for Disease Control and Prevention (CDC) said the agency is investigating Michael’s death , as well as all suspected vaccine-related health problems.

California authorities have recommended stopping vaccinations for a particular batch of Moderna due to a high rate of allergic reactions.

“We have to follow up on each of these cases,” Osterholm said. “I don’t want people to think that we are sweeping them under the rug.”

Many Americans were already nervous about covid vaccines, with 27% saying they would “probably or definitely” not receive an injection, even if the injections were free and considered safe by scientists, according to a December survey by KFF . (KHN is an editorially independent program from KFF).

These people can be particularly susceptible to misinformation about vaccines, said Rory Smith, a researcher for First Draft News , a nonprofit that reports fake news circulating online.

Seven experts on blood disorders interviewed by KHN said there is not enough information available to blame the vaccine for Michael’s decline, and that the proven benefits of the vaccines far outweigh any potential risk of bleeding.

Even if researchers conclude that the vaccine caused Michael’s death, it would still be an incredibly rare event, given that more than 21.8 million doses have been administered .

“No one should think about whether the vaccine is safe or not,” said Dr. James Zehnder, a hematologist and director of clinical pathology at Stanford Medicine.

Michael’s bleeding disorder could have developed quietly for some time, said Dr. Adam Cuker, director of the Penn Blood Disorders Center at the Hospital of the University of Pennsylvania. It could be a coincidence that Michael started showing symptoms shortly after the vaccination, he added.

About 30 Americans are diagnosed with immune thrombocytopenia each day.

The timing of Michael’s illness suggests it had another cause, doctors said. According to his wife’s Facebook post, his bleeding problems started three days after his first covid vaccination. It takes the body 10 to 14 days after vaccination to generate antibodies, which would be necessary to cause immune thrombocytopenia, explained Dr. Cindy Neunert, a pediatric hematologist at Columbia University Irving Medical Center in New York City.

In most cases, the cause of thrombocytopenia is never known, added Dr. Deepak Bhatt, executive director of interventional cardiovascular programs at Brigham and Women’s Hospital in Boston.

On rare occasions, immune thrombocytopenia is associated with certain vaccines , with approximately 26 cases per million doses of the measles, mumps, and rubella vaccine .

But it can also be caused by the viruses themselves, including measles and the novel coronavirus, said Dr. Sven Olson, an assistant professor of hematology and medical oncology at the Oregon Health and Sciences University School of Medicine.

Many patients with immune thrombocytopenia now wonder if they should get vaccinated against covid, Cuker said.

Cuker said he urges anxious patients to get vaccinated, noting that any problems could be managed by closely monitoring their platelet levels and, if necessary, adjusting medication.

Even in patients with underlying bleeding conditions, “it is still safer to get vaccinated than to get COVID,” Zehnder said.

“If you give a vaccine to a large enough number of people, there will be rare adverse events, but there will also be events that overlap in time, but are not related to the vaccine,” Cuker said.

“If an anti-vaccine group uses a single case, where no link has been shown, to dissuade people from getting vaccinated, it’s terrible.”

Barbara Loe Fisher, president of the National Vaccine Information Center, said her site provides balanced information from reputable news sources such as CNN, CBS and the Miami Herald, as well as Pfizer and the CDC.

In an interview with KHN, Kennedy said he questions why government officials have been quick to dismiss connections between vaccines and deaths.

“We do not discourage anyone from getting vaccinated,” Kennedy said. “All we are doing is transmitting the data, which is what the government should do. We print the truth, which is what medical agencies should do ”.

Opponents of vaccination have played down concerns about the new coronavirus for  months, opposing masks and fighting stay-at-home orders and contact tracing, said Richard Carpiano, a professor of public policy and sociology at the University of California. -Riverside.

Recently, these activists have been so eager to discredit immunizations that they have blamed covid for the deaths of people who are very alive.

Social media users selectively edited a video of a Tennessee nurse, Tiffany Dover, to make it look like she fell dead after getting vaccinated, when in fact she simply passed out, said Dorit Reiss, a professor at UC Hastings School of Law at San Francisco.

Although Dover recovered quickly, users posted a fake death certificate and obituary on social media. Anti-vaccine activists also harassed Dover and his family online, said Reiss, who related the ordeal on a blog.

“They are known for using videos and images that supposedly show the adverse effects of vaccines, such as autism in children and seizures in other receptors,” Smith added. “The more emotional and graphic the videos and images are, regardless of whether they are really linked to vaccines or not, the better.”

In December, multiple Facebook posts falsely claimed that an Alabama nurse had died after receiving one of the state’s first doses. A Twitter user went on to identify the nurse as Jennifer McClung, who worked at Helen Keller Hospital in Sheffield, Alabama.

In fact, McClung died of covid. The social media posts were so widely shared that Alabama Department of Health officials contacted every hospital in the state to confirm that no vaccinated staff members had died.

Anti-vaccine groups often build fables around “a tiny speck of truth,” Smith said. “This is why misinformation, specifically vaccine misinformation, can be so compelling … But this information is almost always taken completely out of context, leading to claims that are misleading or completely false.”

The Ron Paul Institute for Peace and Prosperity misrepresented a news story about the deaths of 24 people in a nursing home in upstate New York, incorrectly blaming covid vaccines.

However, the original article noted that this home had suffered a covid outbreak in late December, before residents received any vaccinations. The vaccines, which require two doses for complete protection, did not arrive in time to save seniors’ lives .

On his blog, Kennedy repeated the misinformation, incorrectly blaming the deaths of residents on vaccines.

Distorting the facts to discourage vaccination is “very irresponsible and detrimental to public health,” Cuker said.