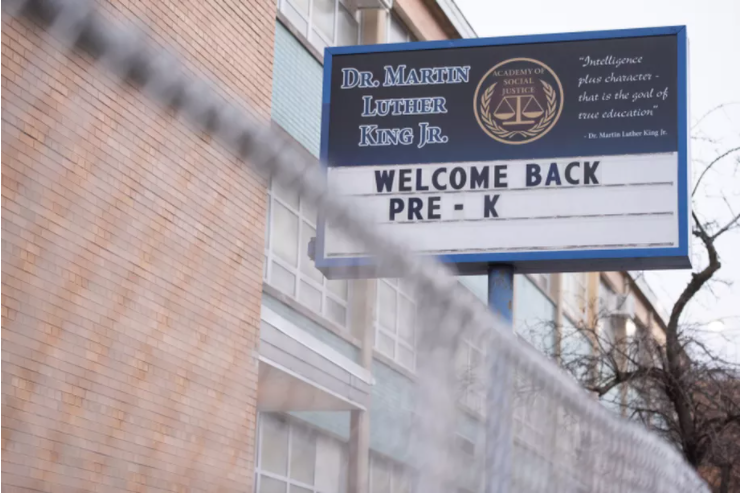 With enthusiasm, Principal Jasmine Thurmond greeted students who returned to the Martin Luther King Jr. Academy classrooms on the morning of March 1. In the afternoon, he and his employees made phone calls in an effort to contact families who selected in-person learning but did not show up.

That day at the school located in Englewood, about 40% of the students who said they would be back were absent.

“We called just to say, ‘We miss you. We know they chose to go back [to teaching in person]. What else do they need? ‘”Thurmond said.

As Chicago reopens more classrooms in a difficult year, principals are faced with the difficult task of tracking down students, both those who signed up for in-person learning and did not show up and those who did not. they responded to messages from the district. The district has said that a “great outreach campaign” is underway. In the days leading up to Chicago’s biggest reopening drive, 15,000 elementary and middle school students had yet to respond by saying what their plans are.

Thurmond’s team came across a litany of reasons why some families who signed up for in-person learning didn’t show up on the first day: Some families had gotten out of the routine of school in person and fell asleep. In response, Thurmond arranged phone calls to wake them up.

Some work situations changed, complicating the logistics of the face-to-face school. Some parents and students had problems with the electronic health exam that apparently must be completed before someone enters a school. As the pre-kindergarten classrooms reopened in January, some parents were nervous about sending their children back to school in the midst of a pandemic.

Of the 238 students at the school, 52% chose to continue distance learning, 31% to return to the classroom, and 17% did not respond . This last segment is unclear in the district data and is something that school leaders have spent their time in the past few weeks trying to understand why.

In some cases, essential workers sent their children out of town or out of state to be left in the care of a loved one. In others, internet access problems made it difficult for some families to communicate with the school. And in other cases, families were devastated by deaths from COVID-19.

The major disruption to education caused by the pandemic has disrupted traditional patterns of attendance. Principals say they are making phone calls, sending out bursts of emails and social media messages, and even going to families’ homes to try to locate the students and get them back.

At King Academy they were faced with an unexpected event: that of the grandparents taking care of their grandchildren who did not know how to take the online health exam. Thurmond said they even sent staff willing to help train them (though separately, parents at various schools reported they had problems with the district’s digital health screenings).

Chicago Public Schools (CPS) has yet to release attendance figures for that week, but in-person attendance figures are likely to be lower than anticipated as families change their minds. , have complications, or in some cases, have runny noses or other health problems that cause them to fail health exams.

In total, about 1 in 3 Chicago elementary students chose in-person learning, though the numbers have dropped in recent weeks , officials admitted.

What happened in January during the district’s pilot reopening for preschool and special education students could be a big help: About 60% of students who said they planned to report for in-person learning did. Not all of them reappeared in remote classrooms: 12% of students did not show up anywhere, a trend that is concerning to educators.

The numbers were worse for the district’s black students: In January, about 20% of black preschool and special education students did not show up for school during the first week of reopening.

Some principals say they are optimistic that in-person attendance will be higher this time and that if COVID-19 rates remain manageable, more students will return for the fourth quarter, as district leaders have predicted.

In Chicago, COVID-19 positivity rates are declining, workplace tensions have eased somewhat after an agreement between the district and the teachers union on the reopening of elementary schools (no agreement on schools yet secondary), and more residents have been vaccinated. Vaccine supply and appointment logistics issues continue to be a nuisance in Chicago, as in many other cities.

Wendy Oleksy, principal of Columbus Elementary located in the Ukrainian Village neighborhood (“Ukranian Village”) said that so far, her in-person attendance figures have been stronger as 60% of children in kindergarten through fifth grades that said they planned to return did, this compared to January’s figures with the pilot reopening, when 1 in 3 of their preschool students returned. He hopes that this week when the high school students return, the younger siblings who did not attend classes last week will join in on their return.

“My priority is to ensure that everyone in the building feels safe and their anxiety is reduced,” added Oleksy, who emphasized that he has communicated with parents through calls, emails, meetings and social media posts. “Any level of anxiety will inhibit teaching and learning. How can I alleviate that? That is my priority ”.

Directors are implementing aggressive tactics to reduce those numbers. A principal of an elementary school located west of the city, who asked to remain anonymous, said that families who did not respond to the district’s reopening survey were a “red flag” signal for the school. About 10% of the students whose families did not respond to the survey are also children who have not actively participated in distance learning.

“That is one of the indicators that shows families that they are completely disconnected from learning,” said the director. “It is possible that last spring they went through [the schools] for a device, but it is also possible that their housing situation and their economic situation have changed.”

The school called these families repeatedly to follow up on the survey. A social worker, security guards, the principal, and the assistant principal also traveled to the homes of these students, but in most cases their efforts were unsuccessful and they did not get them to return or respond.

After reports that thousands of students lost contact with the district during the spring, CPS vowed to redouble efforts. In September, officials detailed new protocols for finding them through phone calls, massive flyer campaigns led by Safe Passage workers and security guards trained to conduct home visits. In September, during the first day of distance education, some 49,000 students had not registered. Weeks later, that number had dropped to less than 3,000.

But as distance learning continued throughout the fall and efforts to reopen schools were repeatedly thwarted by rising COVID-19 rates and threats of union action, authorities warned that attendance was declining. .

In November, the district reported a 3% drop in attendance compared to the same prior period, with black students and students with special needs showing a 5% drop. The attendance of people in temporary housing situations decreased by more than 7 points.

Officials also reported a split in grades, with more students receiving “A” during sustained remote learning, but also more “F”. Disparities in grade data and declining attendance became key arguments in the district’s push to reopen colleges in early 2021.

This article was originally posted on As Chicago Schools Reopen, Principals Search Thousands of Absent Students