Please ensure Javascript is enabled for purposes of website accessibility AstraZeneca says its COVID-19 vaccine is 79 percent effective in a U.S. trial - THE CHICAGO HERALD Press "Enter" to skip to content

Home » AstraZeneca says its COVID-19 vaccine is 79 percent effective in a U.S. trial 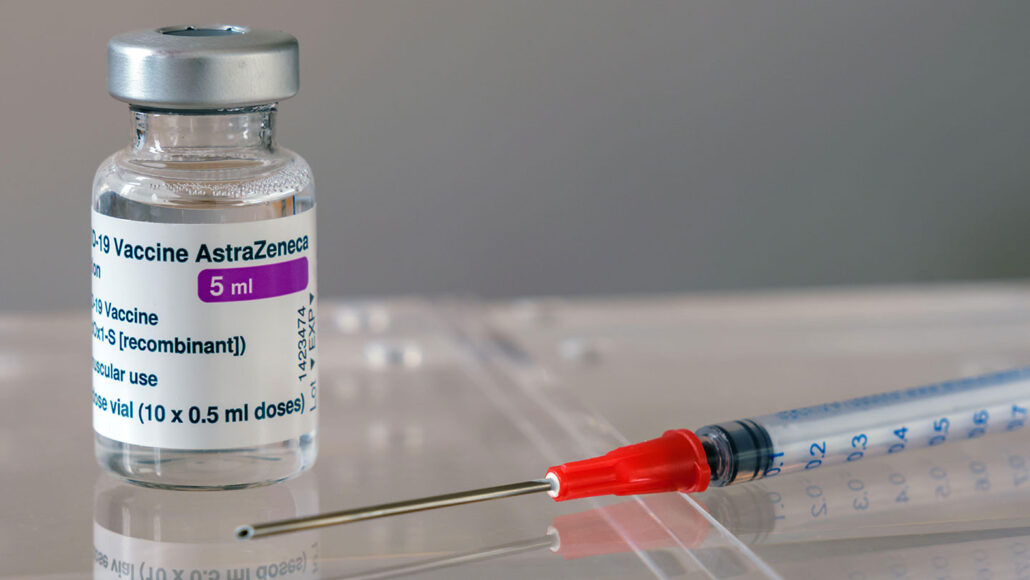 AstraZeneca says its COVID-19 vaccine is 79 percent effective in a U.S. trial

The coronavirus vaccine developed by AstraZeneca and the University of Oxford was effective at preventing COVID-19 symptoms, the company reported March 22 based on a clinical trial of more than 30,000 people in the United States, Chile and Peru.

It’s the biggest trial to date for the vaccine, which has been beset by dosing mix-ups and fears that it could cause some people to develop dangerous blood clots. And in another stumble, AstraZeneca may have included outdated information from the trial for the interim analysis in reporting its results, “which may have provided an incomplete view of the efficacy data,” the U.S. National Institute of Allergy and Infectious Diseases said in a March 23 statement.

The interim analysis was based on data collected until February 17, AstraZeneca said in reply in a statement. The pharmaceutical company said it plans to release updated results within two days.

“It is really unfortunate that this happened. This is really what you call an unforced error,” Anthony Fauci, director of NIAID, said March 23 on ABC’s Good Morning America. “The fact is this is very likely a very good vaccine and this kind of thing does… nothing but cast some doubt about the vaccines and maybe contribute to hesitancy.”

Still, the vaccine’s success — which if it holds is expected to pave the way for AstraZeneca to apply for emergency use authorization in the United States — is good news, says William Schaffner, an infectious disease physician and epidemiologist at Vanderbilt University in Nashville.

“The more the merrier,” Schaffner says. Three other vaccines — Pfizer/BioNTech’s, Moderna’s and Johnson & Johnson’s — have gotten that authorization so far.

AstraZeneca’s shot was 79 percent effective at preventing COVID-19 symptoms in the trial’s 32,449 participants, the company announced March 22 in a news release. Around 20,000 of those participants got the vaccine while the rest received a placebo.

Approximately 60 percent of participants in the trial have health conditions that put them at risk for getting really sick with COVID-19. The vaccine was 100 percent effective in preventing severe disease and hospitalization, AstraZeneca reports. But only five people in the placebo group suffered severe disease, according to information from a World Health Organization briefing. That small number of severe COVID-19 cases makes it difficult to determine the vaccine’s exact efficacy against the worst symptoms.

The shot was also 80 percent effective at preventing illness in trial participants aged 65 and older, an age group at high risk for severe COVID-19. The immune system can weaken with age, so strong protection in such a high-risk group is crucial for keeping people out of the hospital.

A total of 141 participants developed symptomatic COVID-19 in the trial, though the news release did not specify how many cases were in people who got the vaccine or the placebo.  Researchers still don’t know whether the vaccine prevents infection overall, which would further help curb coronavirus transmission.

The latest trial results did find the vaccine is safe. Many countries in Europe had suspended use of AstraZeneca’s vaccine over concerns it could be linked to blood clots, including rare reports of clots that block sinuses that drain blood from the brain (SN: 3/18/21). An independent safety review of the new data revealed no connection to blood clots and reported no cases of sinus clots, the company said in the March 22 statement. The statement did not list other side effects but said “the vaccine was well-tolerated.” If the shot is OK’d for use in the United States, the country’s strong surveillance system should quickly pick up any conditions that might be linked to the vaccine, Schaffner says.

The clinical trial’s findings have not yet been reviewed by independent scientists, but AstraZeneca plans to submit the interim data in the coming weeks to the U.S. Food and Drug Administration to apply for emergency use authorization. The FDA recommends that authorized vaccines reduce COVID-19 cases by half in vaccinated people compared with those who received a placebo (SN: 10/4/20). AstraZeneca’s vaccine surpasses that benchmark.

The results of the new trial align with data from previous clinical trials in the United Kingdom and Brazil that also showed that the vaccine was effective at preventing illness (SN: 11/23/20). But the U.K. trial included people who accidentally received half a dose of the vaccine followed by a full dose, rather than two full doses, making it difficult to interpret the results. Studies also suggest that spacing doses out over 12 weeks instead of four might increase vaccine efficacy (SN: 2/26/21).

The latest clinical trial did not measure how the vaccine fared against worrisome variants of the coronavirus that now are circulating. Researchers have been concerned that some mutations in the virus could dampen the ability of the immune response sparked by a vaccine to recognize emerging variants.

AstraZeneca’s vaccine, for instance, performed poorly against a variant called B.1.351, first identified in South Africa, researchers report March 16 in the New England Journal of Medicine. In that trial, the vaccine was only 10.4 percent effective at preventing mild or moderate COVID-19. The B.1.351 variant carries a mutation that appears to help the virus evade immune responses raised against the original form of the virus that sparked the pandemic.

This article was originally posted on AstraZeneca says its COVID-19 vaccine is 79 percent effective in a U.S. trial