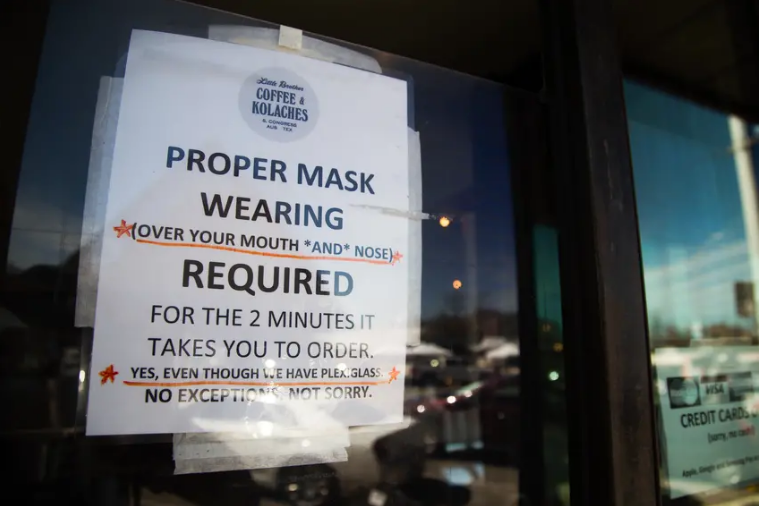 District Judge Lora Livingston has yet to issue a final ruling on the merits of the case, meaning Austin and Travis officials may later be told to comply with state officials.

But in the meantime, County Judge Andy Brown said Friday’s ruling at least prolongs the amount of time masks are required in their communities — which gives them more time to vaccinate their residents.

“I’ve been doing everything that I can to protect the health and safety of people in Travis County,” Brown said in an interview. “And Judge Livingston’s ruling today allows us to keep doing that.”

Abbott ended nearly all of the state’s COVID-19 safety restrictions on March 10, including the statewide mask mandate, citing decreases in COVID-19 hospitalizations and cases. Many public health experts said the move was too soon, before the majority of the state was vaccinated or even was eligible for a shot.

In his order, Abbott said that “no jurisdiction” can require a person to wear a mask in public if the area doesn’t meet a certain threshold for coronavirus hospitalizations in that hospital region. Many local governments dropped their restrictions as a result. However, this was not the case in Travis County where officials said they would continue to require public mask use.

Paxton sued Austin and Travis County the day after state restrictions were lifted. He maintained that Abbott’s order supersedes all local jurisdictions.

State lawyers pushed for the judge to grant a temporary injunction the next day, but Livingston said it wouldn’t have been fair to give the defendants only a day to prepare. Therefore, masks remained required in Travis County in the meantime.

“Every day that we can keep the local health authority mask mandate in place is a victory,” Austin mayor Steve Adler said in an interview with The Texas Tribune on Friday. “The fact that we were able to keep it in place for the last two weeks, during spring break, is a victory, for however long it lasts.”

Adler said as case numbers level off and vaccination eligibility widens, the city can follow through on plans to open more businesses — but the mask mandate should remain in place.

Texas has seen improving conditions as new COVID-19 cases and hospitalizations have dropped to lows not seen since October. Vaccinations are increasing with more than 11.5% of the population fully vaccinated — although Black and Hispanic Texans face systemic medical inequities and are being vaccinated at disproportionately low rates. Starting Monday, all Texans older than 16 will be eligible to register for a vaccine appointment.

But even though the numbers are improving, Dr. Mark Escott, Travis County Interim Health Authority, testified in court Friday that over the last week, he is seeing the downward trend leveling out. And with variant COVID-19 strains in the mix, Escott said the situation could worsen without public health intervention.

This isn’t the first time Paxton sued over COVID-19 restrictions. Back in December, Paxton successfully sued Austin and Travis County over local officials implementing an overnight curfew during the New Year’s holiday weekend. However, the case wasn’t decided until after the holiday, and officials enforced the curfew.

The final outcome of the case could have implications for other Texas cities and counties on how local governments can enforce their own public health mandates, even after the state ordered them to end.

During Friday’s hearing, discussion broadly centered around the question: What powers do local public health departments have, and how do the governor’s emergency powers affect them?

Austin and Travis attorneys said public health officials have the authority to implement health measures — like mask mandates — outside of the context of the pandemic, and therefore should not be affected by Texas’ latest order.

State attorneys argued that Abbott’s emergency powers because of the pandemic trump any local orders.

Livingston pushed back on some of the state attorney’s arguments that not requiring masks allows for individual freedom.

She pointed to past examples of Abbott delegating authority in the pandemic’s response to local governments — and said she understands why officials say they have received mixed messages.

“It’s got to be pretty confusing for local officials to know when they are charged, in the governor’s mind, and have the responsibility to react locally and take charge locally — and when they shouldn’t,” Livingston told the state’s attorneys. “I just needed to let you know that I find that kind of a puzzle.”