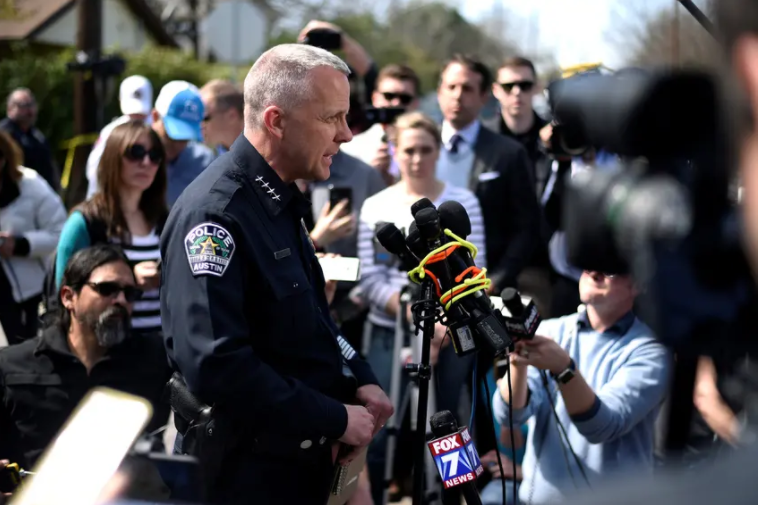 Austin Police Chief Brian Manley is retiring, the city manager told city leadership in a memo Friday. He will be leaving his post at the end of March after 30 years with the department and a growing call for his firing from City Council and community members.

Manley has been at the helm of the police department since 2016, first as an interim chief and then appointed permanently to the job by City Manager Spencer Cronk two years later. During that time, he was praised for his efforts to stop the serial Austin bombings in 2018.

But more recently, Manley has faced harsh criticism, largely spurred by the police killing of an unarmed man last year and how the department handled summer protests over racial inequities and police brutality. At a press conference Friday, Manley acknowledged the department’s strained relationship with the community, but said that recent criticism was not the reason for his departure. He noted instead that hitting his 30-year mark was important to him.

“The policing profession is under scrutiny and is under reimagination and redesign, and I know a lot of that is taking place here in Austin,” he said. “But I stand here with confidence knowing that APD will come out of this a strong agency.”

As the nation was shaken by the death of George Floyd in Minneapolis, Austin was also grappling with the police shooting of Mike Ramos. Floyd, a Black man, died last May after a white police officer knelt on his neck long past the point of him losing consciousness. In April, Ramos, who was Black and Hispanic, was shot by Austin police while he was unarmed and driving away from officers.

Afterward, several City Council members asked Cronk to fire Manley, and the council unanimously put on record that they had no confidence that police leadership would implement changes to end violence disproportionately used against people of color and low-income residents. Cronk opted against firing the chief.

As community members continued to call for drastic changes to policing in the city throughout the summer, the City Council in August unanimously opted to cut the police budget and funnel the funds into other programs that affect public safety, like housing and mental health services. About $30 million, or 7%, of the budget was cut from the current budget, and more than a hundred million more was put into transitionary funds while leadership weighed if some police services could be handled by other city departments. For example, the council recently voted to move the city’s crime lab out from under the police budget, but it will keep the same funding structure.

The immediate budget cut largely eliminated vacant positions and delayed new cadet classes, which were already on hold while the city awaited audits that have since reported “significant racial and gender disparities” in Austin police training. With the lack of new cadets, Manley pulled officers from specialized units and put more police on patrol.

“All of the hard work that has been put in over the last year and half to ready our agency for the next cadet class so that we can start that process again is coming to a culmination,” he said Friday. “The fact that I’ve been able to see some of these milestones also weighed into my decision that this is the appropriate time [to retire].”

Council Member Greg Casar, who called for Manley to step down last year and led efforts to cut police funding, said in a statement Friday that though he had major disagreements with Manley, he respected his years of service and wished him well.

“The community is now tasked with choosing the future path of our police department,” Casar said. “Our goal must be protecting public safety and civil rights, for all neighborhoods and for people of all backgrounds.”