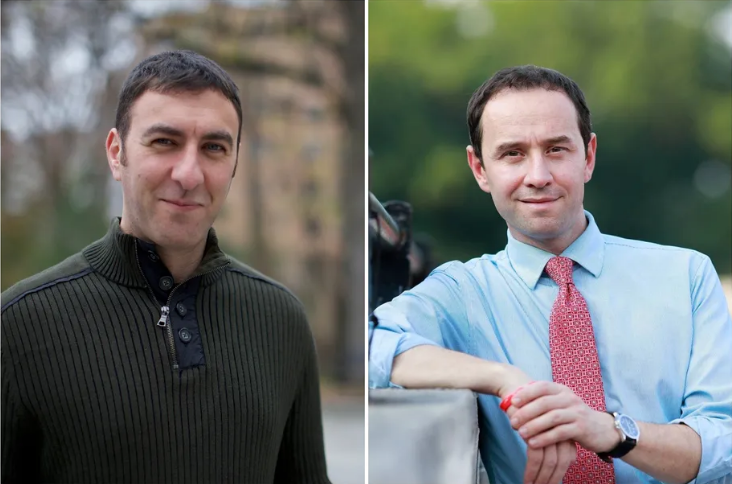 In a ranked choice voting first, an outside spending group is promoting two rival candidates for City Council — directing voters to choose Eric Dinowitz first and Daniel Padernacht second in a special election for an open Bronx seat.

Voters of NYC, a Super PAC funded by developer William L. Zeckendorf and other real estate industry players, disclosed Tuesday that it had sent a mailer and bought a newspaper ad featuring the names and faces of both candidates.

The promotions include an image of the ranked choice ballot along with directions for how to select the two candidates in order.

The group put out a combined $21,668.50 on the double-header promotions, which thanks to the Supreme Court’s Citizens United decision are not subject to the city’s strict campaign finance raising and spending limits.

In its accounting to the city Campaign Finance Board, Voters of NYC attributed $6,428 of that spending to Padernacht and the rest to Dinowitz.

THE CITY reported earlier this week that Voters of NYC spent $34,000 on mailers supporting Dinowitz only — and that the world’s richest woman, Walmart heir Alice Walton, is pouring money into influencing the special election contest in a nearby district.

In-person early voting is underway and concludes on Sunday for the March 23 special election in the 11th District, a swath of the north Bronx including Bedford Park, Kingsbridge, Wakefield, Woodlawn and Riverdale. The seat was vacated when former Councilmember Andrew Cohen was elected to a Bronx Supreme Court judgeship last year.

Dinowitz is a local Democratic Party district leader and son of longtime Bronx Assemblymember Jeffrey Dinowitz. Padernacht is an attorney specializing in real estate transactions, according to his law firm’s website.

Dinowitz said in a statement to THE CITY that he isn’t aligned with real estate interests and that he isn’t cross-endorsing Padernacht.

“The real estate interests behind this mailer obviously don’t know me very well. I stand with labor, not real estate, and I haven’t endorsed a #2 in the race,” Dinowitz wrote. “I don’t want or need the support of anyone who doesn’t share my values — and that means anyone in real estate. I’m a proud labor candidate and a neighborhood candidate.”

The Voters of NYC mailers advocate passionately for the pair.

“Please be sure to vote Eric Dinowitz for City Council: the leadership and experience we need in the City Council,” reads the mailer, which was registered with the CFB on March 16. “If you don’t vote, the community loses!”

The back page features an inset photo of Dan Padernacht as “2nd Choice,” and a mock-up of the ranked ballot, on which the names of the other four candidates besides Dinowitz and Padernacht are blurred.

Padernacht’s campaign did not respond to THE CITY’s request for comment.

The group heavily funded by Walton, New Yorkers for a Balanced Albany, has blitzed central Bronx voters with more than $90,000 worth of mailers, internet ads and live phone calls boosting Sanchez as of Thursday, campaign finance records show.

News of the wealthy outsiders’ big spending in the largely working- and middle-class districts drew ire from candidates in both races.

Two candidates, Mino Lora in the 11th District and Elisa Crespo in the 15th, plan to hold a joint virtual event Friday morning alongside tenant advocates “to protest the attempt by wealthy real estate interests to elect candidates” in the borough.

“The money speaks for itself. If you go back and you track the money in rezonings, in development, in land use — this is what they, as corporations and as consultants, are interested in,” said Lora, a former nonprofit executive.

Political observers said that voters should expect to see more independent spending on behalf of candidates just like in 2013, the last time the majority of the City Council was up for reelection.

That year, a political action committee called Jobs for New York, which was spawned by the Real Estate Board of New York, spent $4.9 million supporting candidates running for City Council during their primary races.

Out of the 47 candidates it backed — with its spending in some races exceeding $250,000 — 20 ended up winning Council seats.

“It has happened, but I have a feeling that this time it’ll be a lot more,” said Eli Valentin, a political analyst and lecturer at Union Theological Seminary.

With six candidates running in the 11th District race, there’s a chance that ranked choice voting will play a role in deciding who holds the seat.

Under New York City’s new voting system, voters’ second or lower choices could impact the race if no candidate reaches a 50% threshold. If that’s the case, the candidate with the fewest first slot votes is removed from the race.

Then, each ballot’s vote is automatically reallocated to other candidates according to order of preference until there are two candidates left.

Valentin said that Voters of NYC is likely making a calculated decision on who their funders could work well with in the City Council, while trying to lock out more progressive candidates with anti-development stances.

“They’re probably looking at candidates willing to engage folks that represent their interests and — in the case of Dinowitz, given that his father has been an elected official for a long time and is a higher up in the Bronx Democratic machine — they may see a person who is more willing to sit at the table with them,” Valentin said. “As opposed to Mino Lora, who’s endorsed by the more progressive folks.”

He added: “I don’t think they see an opportunity to even engage in conversations with someone like that.”

Gary Axelbank, who hosts BronxTalk and The Bronx Buzz on local cable TV channel BronxNet, said that outside spenders are likely investing in candidates they see as front-runners — and looking to cash in on the potential return of The Bronx’s pre-pandemic real estate boom.