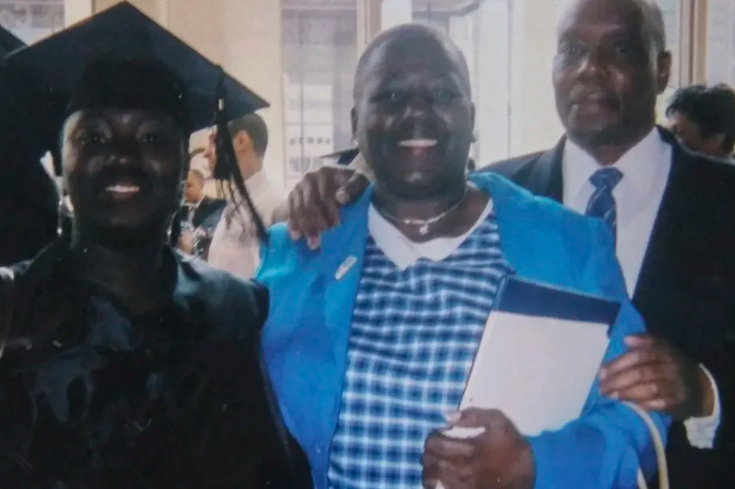 The program, in its initial form, offered $20,000 to the injured and $50,000 to families of those killed. Since then, the payouts have expanded to include first responders who suffered 9/11-related illnesses and billions more have been promised through 2090.

At the time the fund was announced, Americans praised the unprecedented act, which passed by an overwhelming bipartisan vote in the House and Senate. Now, amid one of the worst tragedies the country has endured, some are wondering why similar aid doesn’t exist for people who lost an immediate family member to COVID-19.

Kenneth Feinberg, who ran the 9/11 fund, told THE CITY a similar setup for the pandemic is “probably not doable,” given the scale of suffering. But others say that’s exactly why help is needed.

Ileana Cotto is among them. She and her husband, Joel Gomez Dominguez, were scraping by with five children, ages 9 to 17 at the time, at home in Williamsburg when he got sick last year.

Gomez worked as a Brooklyn apartment-building superintendent bringing in $600 a month, while Cotto stayed home taking care of their youngest daughter, who has an intellectual disability. They were both looking forward to the spring — they sold empanadas and soda at local baseball diamonds to supplement their income.

‘He was everything. He was my other half.’

That never happened. Last March, while making his rounds at the apartment complex, Gomez started feeling ill. The 37-year-old checked into Woodhull Medical Center in Brooklyn and was diagnosed with COVID-19. By April 6, he had died.

“He was everything. He was my other half,” she said in Spanish.

After the initial shock dulled, Cotto began to grapple with her family’s new financial reality.

“Financially, he was the only person that helped me and my daughters,” she said.

A single mother, Cotto was going broke and had no idea what to do.

Of the roughly 31,000 New York City residents that have died from COVID-19, at least 6,500 were working-age adults, according to the most recent figures from the city Department of Health and Mental Hygiene.

The exact monetary burden their families face is unknown — medical bills, funeral costs, years of lost income and benefits. One economist estimated the first 100,000 pandemic deaths in the U.S. had cost $1.4 trillion.

The problem is made worse by the virus’ disproportionate effect on the poor and essential workers, many of whom made low wages. A recent study estimated that adults from households earning less than $55,000 made up two-thirds of virus deaths.

On April 10, 2020, Gov. Andrew Cuomo announced that he was working with the state’s congressional delegation to create a federal “COVID-19 Heroes Compensation Fund” to support frontline workers and their families.

“Just as Congress did after 9/11, we need to support our heroes once again,” he tweeted. Cuomo’s office did not respond to a request for comment.

U.S. lawmakers proposed a handful of bills for such a fund, including two introduced earlier this year by Reps. Adriano Espaillat (D-Manhattan) and Carolyn Maloney (D-Manhattan, Brooklyn, Queens).

Espaillat’s bill, referred to the House Subcommittee on the Constitution, Civil Rights and Civil Liberties in March, would extend eligibility beyond families of essential workers to anyone living in the U.S. That would include undocumented immigrants, as long as they suffered financially as a result of a COVID-19 infection.

A similar push in the state was put forth last year by then-state Sen. David Carlucci (D-Rockland, Westchester). “The effort to ensure they are protected financially with these benefits should be a universal fight among the New York State Legislature,” he said at the time.

That fund never got off the ground.

Federal, state and local governments have unlocked trillions of dollars in coronavirus aid: unemployment benefits, rental assistance, food subsidies, child tax credits and more. In the last 13 months, congressional aid packages apportioned $3,200 in direct payouts to most Americans and a federal eviction ban has been extended through June 30 of this year.

Starting April 12, families who lost a loved one to the virus can apply for up to $9,000 in reimbursement for the funeral and burial of COVID-19 victims — the largest federal program of its kind. The program, run by the Federal Emergency Management Agency, came after extensive lobbying from Sen. Chuck Schumer and Rep. Alexandria Ocasio-Cortez of New York.

New York City’s burial assistance for low-income residents was temporarily increased from $900 to $1,700 in response to COVID-19.

There is a federal compensation program for some pandemic victims or their bereaved families. The little-known fund, however, does not cover injury or death as a result of a disease but rather some of its treatments.

Since it was established in 2010 for smallpox and pandemic influenza treatments, only 29 of 551 claimants have been compensated, with an average payout of $207,000, according to the U.S Department of Health and Human Services.

At least 106 claims were for COVID-19 treatments such as vaccinations, ventilators and the medication hydroxychloroquine once backed by the Trump and Cuomo administrations.

No other special relief fund exists for surviving families, outside of the newly available funeral expenses money.

“Death is a gateway to poverty for many people,” said William Arnone, CEO of the National Academy of Social Insurance. A parent or spouse’s unexpected passing can cause a ripple effect of negative consequences, particularly for families already struggling.

“If the goal of a civilized nation is to prevent suffering … you would think there would be something to meet this need, which is now exacerbated,” said Arnone, who lives in New York.

The Social Security Administration offers survivor benefits to widows, widowers and the children of some deceased workers. The average allowance in February was between $770 and $1,450 per month.

Still, the recipient must meet certain qualifications, and the deceased needs to have paid enough into the program, which is not always the case.

Cotto said her husband, an immigrant from the Dominican Republic, did not pay enough into Social Security for her to collect survivor benefits. Nor did he have life insurance.

Instead, Cotto said she has relied on SNAP and food donations from local churches. She considered selling concessions without Gomez, but wasn’t sure she could manage while looking after the children.

Cotto’s niece helped create a GoFundMe page that covered the cost of a few months of expenses and the funeral. The online fundraiser was one of about 120 identified by THE CITY last summer for families of COVID-19 victims in the New York City area.

“It’s helped,” said Cotto. “But I don’t have anything left.”

Marisa Taylor has been grappling with some of the same problems since her mother and father, Laura Taylor Howell and Clifton Howell, died last April.

Taylor, 44, had been juggling part-time work at a senior services agency while taking care of her aging parents and brother, Carl, who had been diagnosed with a debilitating kidney disease years earlier. The family, living together in their $1,300-a-month Bronx apartment, got by on Taylor’s wages, her brother’s disability payments and their parents’ pensions.

But when the virus invaded New York, Taylor lost her job. Her parents each developed a cough, and then rapidly declined, dying hours apart in separate hospital rooms on April 27. Their deaths left one hole in Taylor’s heart and another in her pocket.

Her mother’s life-insurance policy covered half of the burial costs. Taylor emptied the family bank account to pay off the rest, she said.

Soon, the family income plummeted. They started missing the rent. Taylor figured out how to get paid as her brother’s home health care worker, but that only brought in $258 a week. And the payments ended last month when her brother entered the hospital for heart surgery.

That same month, their landlord served them with a lawsuit for $5,000 in rent arrears. Taylor sought help from Part of the Solution, a Bronx aid nonprofit. But so far, the organization has only been able to cover part of the debt.

“It’s like you’re in front of a firing squad but they haven’t shot you yet,” said Taylor.

Compensation funds may offer a solution for some families. But the funds are rare and there’s nothing that approaches the scale of the need wrought by the pandemic.

The 9/11 fund has found about 20,000 claimants, a number that has grown in the two decades since the attack. Compensation funds set up after the 2013 Boston marathon bombing and 2016 Pulse nightclub shooting in Orlando logged roughly 230 and 310 eligible claims, respectively.

Even if eligibility was narrowed to families of deceased wage earners, a COVID-19 fund would have far more claimants.

“I don’t think it’s practical,” said Feinberg, who oversaw compensation funds for 9/11, the Boston bombing and a handful of other tragedies. Feinberg added that the size of the pandemic alone makes a national fund untenable.

“Who is eligible? How much money will they get? What’s the source of the funds? What proof is required to determine the eligibility?” he said. “The operational nightmares lead me to conclude that … Congress and the administration have wisely determined that that’s probably not doable.”

Feinberg acknowledged the federal safety net is not enough, saying Americans in need should also look beyond the government. Both the Boston and Orlando funds were built on private donations.

Last year, at least $20 billion in private funds were donated for COVID-19 globally. Three quarters came from U.S. donors, according to the Center for Disaster Philanthropy.

Pandemic of Love, one of myriad aid organizations, said it helped 128,000 people in New York State and delivered $12.5 million in direct assistance. More than 300 funerals were covered by the nonprofit.

But donations are unpredictable and should not replace a more stable federal safety net, said Yesenia Mata, executive director of La Colmena, a Staten Island nonprofit that helps immigrants, including those who are undocumented and rarely qualify for governmental support.

The organization gave out roughly $1.5 million last year, she said.

“We don’t know how long we can keep doing this. It all depends on donations,” she added.

Mass shootings and industrial disasters invite blame, and compensation funds can be designed to forestall legal action. For example: Claimants for the 9/11 fund were forced to waive their right to sue the airline corporations involved.

Blame is more convoluted in a pandemic, said Samantha Montano, assistant professor of emergency management at the Massachusetts Maritime Academy.

“This virus is natural. The fact that it had the effect on us that it did is not natural. It’s a product of decisions made by elected officials,” she said. “That starts to open the door to argue for a compensation fund.”

For some New Yorkers, the difficulty of creating a federal compensation fund should not prevent the government from providing for bereaved families, including some who have had to drastically alter their lives to stay afloat.

When Lorraine Nelson’s husband, Arthur, 74, died from the virus, her income plummeted.

Along with Arthur’s earnings as a part-time bartender, she lost half of the pension he was collecting for his years as an ironworker. In May, Nelson was forced to retire early from her job as an administrative assistant, due to downsizing, cutting her income further.

At 68, she is now relying largely on Social Security and modest savings. Her monthly income is about a third of what it used to be — barely enough to cover her everyday expenses, utilities, medical bills, car payments and the mortgage, she said.

Unsure of how to keep up, she decided to put her Brooklyn home up for sale — the same two-bedroom in Bay Ridge she and Arthur purchased together, and where they raised two daughters.

“I’ve been in this house for 33 years,” said Nelson. “But the money in the bank is dwindling.”

Marisa Taylor, whose brother remains in the hospital, stresses her self-reliance. But she also acknowledges that she needs help — and says the federal government owes bereaved family members like her because it failed to contain the virus.