Home » Chicago leader Karen Lewis, who changed the face of teacher organizing, is dead at 67 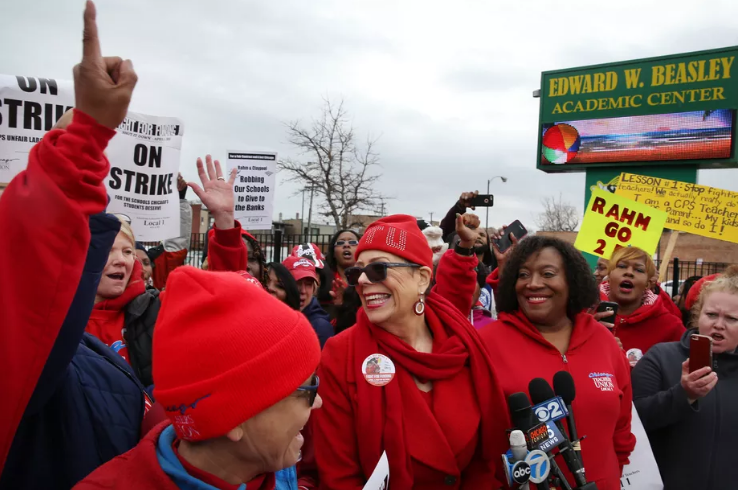 Chicago leader Karen Lewis, who changed the face of teacher organizing, is dead at 67

Former Chicago Teachers Union President Karen Lewis, who steered a sea change within  public education organizing before stepping down in 2018, has died. She was 67.

The Chicago Teachers Union confirmed her death in a statement shared Monday morning. She died after several years of struggling with brain cancer.

Lewis presided over the union from 2010 until she stepped down in 2018 to focus on her treatment for brain cancer. News of her death came as the Chicago Teachers Union weighs a tentative agreement with Chicago Public Schools over reopening campuses in a pandemic — an effort that unfolded after a high-profile battle. The protracted negotiations showed the force of the union in shaping education policy using strategies that Lewis — a former chemistry teacher — forged in her eight years at the helm.

Lewis took over leadership of the union after decades as a teacher and activist against contentious school closings and other education reform measures in Chicago. As president, she, along with the group that took leadership, the Caucus of Rank and File Educators, popularized the “common good” approach to union organizing that brought social issues to the core of their platform and pushed for teachers’ voices in shaping public education policy.

“She was the architect of today’s fight for education justice,” said former union spokeswoman Stephanie Gadlin in a message shared Monday morning. “Karen Lewis was one of the most powerful and prolific voices in public education, advocating for students, their families and the communities in which they live.”

In the decade after Lewis and her caucus of activist teachers took over leadership of the Chicago Teachers Union, educators in Los Angeles, Milwaukee, Seattle, Saint Paul, Minnesota, and Dayton, Ohio, followed that model of union organizing to fight for social justice goals.

Lewis, in her tenure as Chicago Teachers Union president, led the union in its 2012 strike, publicly sparred with Rahm Emanuel, then Chicago’s powerful mayor, and became a figurehead for a wave of teacher activism around the country.

In the summer of 2018, unions across the country were reeling from the potential consequences of a U.S. Supreme Court decision that limited their ability to automatically collect fees, and Chicago teachers were gearing up for another contract fight with Emanuel, who had not yet announced he would not seek another term. As she stepped down, Lewis sent teachers a note urging them to support then-Vice President, Jesse Sharkey, as her replacement and endorsed CTU political director Stacy Davis Gates for the VP role.

“Our enemies are banking on this transition in CTU leadership to confuse, conflate, and co-opt our union,” wrote Lewis, who had been the face and voice of a seven-day, 2012 teachers strike that became a national example of how teachers could wield their collective power. “Do not let them.”

As a Black high school student in Chicago in the late 1960s, Lewis boycotted Kenwood High School several consecutive Mondays as part of a group calling for more Black teachers and administrators, the incorporation of Black history into the curriculum, and improved facilities at predominantly Black schools in the city.

In her 2018 book “A Political Education: Black Politics and Education Reform in Chicago,” historian Elizabeth Todd-Breland connected Lewis’ activism as a student to her rise as a political force within Chicago, and national, labor politics. (Read an excerpt here.)

“In 2008, dismayed by increased privatization and attacks on public education, Lewis started attending reading groups, speaking out at Board of Education meetings, and working to restrict charter school expansion with a new CTU caucus, the Caucus of Rank-and-File Educators. Lewis recalled that working with this group ‘reminded me of my student activism days in the sixties, so I felt like I was right back to where I started from. It was just like this full circle thing.’”

The daughter of CPS teachers, Lewis was elected to the top role in the Chicago Teachers Union in 2010 and oversaw its shift from bread-and-butter union issues, such as salary and benefits, to galvanizing teachers and using their collective power to be a vocal force in city and national education policy. She helped build coalitions of teachers, parents, and community organizers who fought against what she called a corporate reform agenda that spurred school consolidations and closures. She kept a Halloween mask of Emanuel on her desk.

“The insurgency of the Caucus of Rank-and-File Educators developed from the ground up with teachers, parents, and community members working together. Teachers were once again organizing in the communities where their students lived, fighting back against city education reform plans that disproportionately impacted black communities,” wrote Todd-Breland, whom Mayor Lori Lightfoot appointed to Chicago’s school board, in her 2018 book.

Lewis wrote in her letter that year that her tenure atop CTU was a “constant fight against powerful forces and their myriad of allies that seek to destroy collective bargaining and rob our children of their futures.”

“CPS may always be a hot mess,” Lewis wrote, “but with our due diligence, creativity, expertise and insights we can one day make this the strongest school district in the nation.”

Lewis’ former spokeswoman, Gadlin, said in a statement Monday that the nation had “lost a true champion.”

“Karen Lewis was one of the most powerful and prolific voices in public education, advocating for students, their families and the communities in which they live. For her tenure as president of the Chicago Teachers Union, she was the architect of today’s fight for education justice,” she said.

“Our city has lost a great voice.”

This article was originally posted on Chicago leader Karen Lewis, who changed the face of teacher organizing, is dead at 67