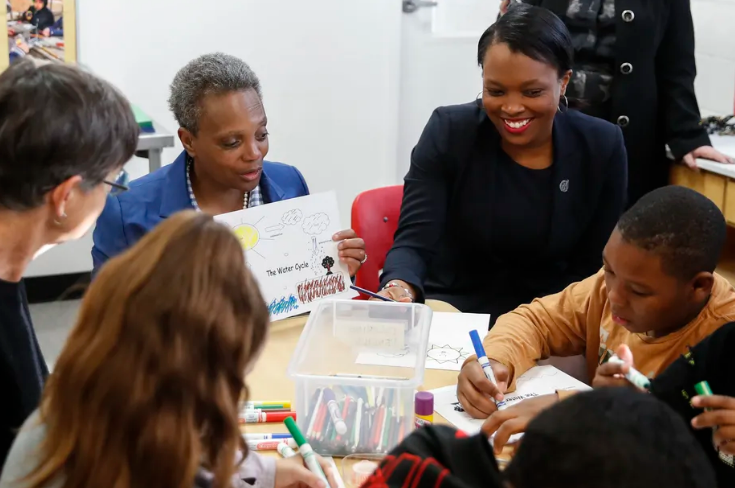 For Nicole Spicer at Chicago’s Bronzeville Classical, news that the district’s CEO, Janice Jackson, plans to step down stirred anxious questions: Could the city enlist a leader with the experience, education chops and mettle to replace her? What would it take to draw that kind of leader to the traditionally high-pressure job at an especially high-pressure moment?

Finding a successor will be “a huge undertaking,” said Spicer, whom Jackson handpicked as the founding principal for the selective South Side elementary in 2017. Spicer said her priority No. 1 for the next hire is someone steeped in education, like Jackson, who drew from her own experiences as a former Chicago student, teacher and principal.

Over the past decade, the tenure of Chicago schools chiefs has tended to be volatile and brief. Jackson was the exception, outlasting the five previous chiefs with her three-and-a-half years of service — but even she made it clear this week that the job’s demands amid perpetual conflict with the union and the drain of COVID-19 had weakened her resolve.

Education insiders privately warn that, if the homegrown CEO who dubbed leading the district her  “dream job” is stepping down, it’s likely a narrow list of qualified individuals who could, or would, succeed her. The district sits at a challenging juncture: It hasn’t yet reopened school buildings full time for most students, animosity with the teachers union lingers, parents feel dissatisfied, thousands of students have disengaged entirely, and there’s political uncertainty about who will ultimately call the shots as the conversation over the elected school board gets fast tracked in Springfield.

But certain aspects of the job could make it attractive. The district has reported marked growth in graduation rates and relative budget stability in the past decade. It’s poised to receive billions in federal emergency funding, which give it the opportunity to innovate and tackle persistent challenges. And the moment offers a rare chance for an incoming CEO to appoint his or her own leadership team, as the district’s No. 2 and No. 3, LaTanya McDade and Arnie Rivera, also will step down.

“It’s certainly a challenging time to recruit a new leader,” said Beth Swanson, who served as deputy of education in Mayor Rahm Emanuel’s administration and is now CEO of the venture philanthropy fund A Better Chicago. “But it’s also a unique opportunity to think about the best possible ways to serve our students in this moment, given the shift to remote learning and hybrid learning and the use of technology. This is a moment where innovation and collaboration are critical.”

The district said Wednesday that it’s engaging Illinois-based BWP & Associates to conduct a national search, but it has not finalized a contract with the company yet. The district put out a bid for an executive search firm last month to replace McDade but modified its scope to focus on finding a CEO.

John Easton of the Chicago Consortium on School Research said Jackson brought a tough-to-replicate combination of strengths to the job: deep understanding of the district, instructional expertise, the personal investment that comes with being a district parent, and a close bond with McDade.

“I mourn their departure,” he said. “I was looking forward to the stability because we need it so much, and I scratch my head about how we will replace them.”

The district’s new leader will have the jump on the task of overseeing an expanded summer school program and reopening school buildings for full-time in-person instruction in the fall. But perhaps even more challenging are some of Chicago Public Schools’ intractable pre-pandemic issues: deep mistrust of the district in some of the city’s Black neighborhoods and declining enrollment, with a growing number of half-empty schools that offer increasingly pared-down programming.

And the timing of the new leader’s likely arrival means she or he will need to get up to speed and tackle a pressing to-do list on an incredibly compressed timeline — and with a mayoral election on the horizon that could affect that leader’s fate in a mayoral controlled district. That makes Easton think that a district insider might be in a stronger position to pull off that challenging transition.

“I’d love to see an insider step in,” Easton said, though he said he does not have an administrator in mind.

Outside CEO hires to Chicago Public Schools have, in recent history, struggled to gain much traction and departed quickly. Arne Duncan, the former Chicago Public Schools CEO and U.S. education secretary, said what makes Jackson’s departure such a blow to the district is that she appeared poised to stick around. The district must look for a replacement who does not view the job as a resume-builder or a stepping stone to another position.

He pointed to recent turnover at the top of other large urban districts, which indicates that this period of time was difficult for many superintendents.

“This past year was hopefully a once in a hundred years level of challenge,” he said. “There was no playbook for it. Nobody won. The pandemic won.”

As for job requirements, Duncan said a “certain chemistry” with the mayor and school board is a job requirement. The district must frame the job opening as an opportunity to rebuild a better urban school system — a great fit for somebody who does not feel beholden to traditional ways of doing school.

With the elected school board conversation now on a fast track in the state’s legislature in Springfield, the power structure that gives the mayor and schools chief authority is now in flux. It’s hard to say just how much autonomy a new hire might have — though the current structure of reporting to City Hall also meant Jackson could get overruled by the mayor.

The Chicago Teachers Union so far this week refrained from directly criticizing the schools chief, as its leaders formally called for a CEO search process that actively involved families and school communities. Union President Jesse Sharkey acknowledged the enormity of the job, but said that Jackson and her team had improved the district’s reputation and done some foundational work, including investing more in schools and improving facilities, that would benefit the next CEO. “There are a bunch of ways we have to improve, don’t get me wrong,” he said, “but it’s not the impossible job. This is a school system that has got a lot impressive features that are exciting to preserve, save, and improve.”

The politics required of the role might not be a deterrent for some candidates, since large urban districts in the order of Chicago are a perennial draw for ambitious, talented leaders, even under challenging circumstances, said Dan Domenech of the American Association of School Administrators. But only a small pool of candidates will have the deep experience, instructional knowhow and political savvy needed for Chicago Public Schools’ top job.

“There’ll be no shortage of applicants,” he said. “But only a handful of people are qualified to tackle what’s a very difficult job — now more than ever.”

Domenech said that while the concurrent departures of Jackson’s second- and third-in-command raise the hiring stakes for the district, some superintendents would be drawn to the opportunity to build their own leadership team.

Addressing the fallout from the pandemic will be a heavy lift. But with billions of federal funds on the way, this moment of disruption also opens up room for innovation and decisive action to tackle long-standing problems and inequities, with the means to do it.

The moment calls for someone who doesn’t shy from conflict and who’s willing to roll up sleeves and work closely with community leaders, school councils, and principals, said Heather Anichini, the president of the Chicago Public Education Fund.

“Chicago is the best city to lead public education,” she said. “People care so much about public schools, who’s leading them, about how that person acts and what that person says. It also means people don’t always agree and there is often tension and controversy and difficulty.”

At Bronzeville Classical, Spicer said she began fielding calls from parents moments after Jackson’s announcement went public. She said they’re worried about how the leadership departures will affect their school, which Jackson said Monday was one of her proudest achievements.

She’s telling them that her school will carry on.

“I do have faith in the district to carry on with the business of educating children in Chicago,” she said. “If I’m honest, I am concerned there will be a lot of change but I know Dr. Jackson is committed to see the transition through. She will make sure whoever is selected is set up for success. That gives me some consolation.”

This article was originally posted on Chicago schools CEO search: ‘A very difficult job — now more than ever’