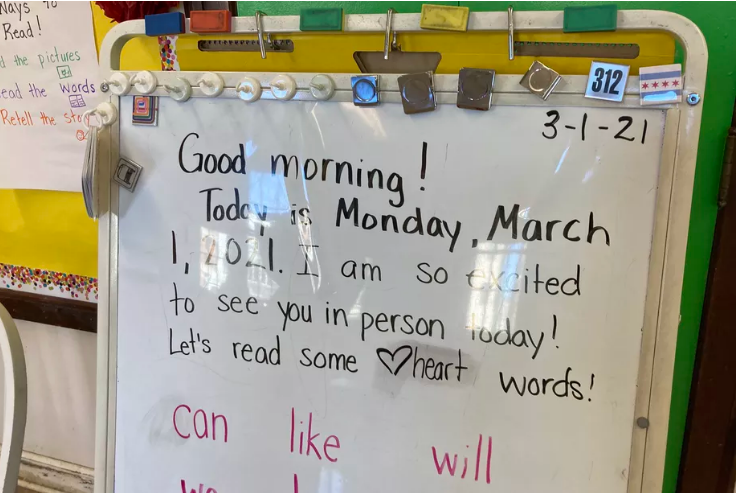 Anika Matthews’ daughter returned to her Chicago elementary school this week, thrilled to reunite with peers and educators after almost a year of learning in front of a computer screen.

Back in the classroom at National Teachers Academy on the city’s South Side, she fired up her tablet and logged back into her virtual classroom.

For half the day, the fourth grader learns with an educator teaching from home and a teaching assistant supervising in the classroom. For the rest, another teacher and her classmates in the room log on to virtual classes with peers who chose to continue learning remotely.

With roughly a third of Chicago teachers currently working from home, the scenario of in-person students learning with a virtual teacher has been one of the inevitable compromises families and educators have faced during this week’s transition to in-person learning for Chicago’s elementary schools.

Some principals worry that such a scaled-back version of classroom learning fails to deliver its full benefits and that disparate versions of what in-person instruction looks like across schools will lead to inequitable outcomes. District officials cannot say how common these arrangements are, but they have led some families to sit out in-person learning for now.

But some parents and school leaders say in some cases, the arrangement seems to be working out more smoothly than expected, and students are responding positively.

“Just being in the classroom with other students, being able to discuss and laugh together — that experience is way better than being at home alone,” Matthews said. “It’s a really good benefit for her soul.”

Under its reopening agreement with its teachers union, the district has granted accommodations to work from home to roughly a third of the 10,800 teachers expected to return to school buildings so far. As of earlier this week, the district had hired just more than half of the 1,000 promised cadre substitute teachers and about 700 of planned support staffers to help reopen schools.

Troy LaRaviere, the president of the Chicago Principals and Administrators Association, addressed the district’s school board last week to caution that staffing issues at some schools could impact the quality of in-person instruction. The former principal said many students will return to their campuses, “only to sit in a classroom and look at a screen so they can learn from a teacher who’s teaching from home.”

“The CEO and the mayor are not mentioning that extremely important fact when they talk to the public about reopening, which puts principals in a horrendous situation with parents,” he told the board.

No one appears to know how common the scenario is. LaRaviere says he does not have data. Nor did LaTanya McDade, the district’s academics chief. In an interview this week, McDade said that schools have worked to adjust schedules and student rosters so that, when possible, remote teachers work with remote students and vice versa. But when students in person are learning with a teacher logging in virtually, McDade said the goal is to make the most of the adult supervising in the room, looking for opportunities for small-group and one-on-one work.

“Of course, the ideal situation is to ensure that all of our students in person have a teacher in front of them in person,” she said.

On some online family forums this week, some families said they decided to stick with fully virtual learning when they realized their students would be in the classroom two days a week with teachers working from home.

Two principals, who spoke with Chalkbeat anonymously because the district had not authorized interviews, said staffing has been a central challenge. They both said lean staffing and a substitute teacher shortage were “pre-existing conditions” worsened by the pandemic, as one school leader put it. Both were able to offer four days of in-person learning to at least some students who returned, given small enough groups of students in each classroom. But they were not able to ensure a certified teacher in front of students in each classroom.

The principal at one West Side school said a special education classroom assistant, a substitute teacher or one of the miscellaneous support staff the district hired is in the classroom overseeing learning while students are on their computers with their teachers. The principal said it’s especially disappointing not to be able to offer in-person support from certified teachers to students with special needs, who were often the ones struggling the most with virtual learning: All of the school’s special education resource teachers got accommodations.

A North Side school principal said the school has been able to line up substitute teachers for classrooms whose teachers are virtual, but the substitutes are not versed in the curriculum and often lack technology skills to assist with online learning. The school has not had the time or staff available to train them. Besides, the school has experienced sluggish internet connections as the number of students logging on has strained its bandwidth.

“I wish we had more staff to fully support the experience of students who took that leap and returned,” the principal said. “If we’re talking about equity, I don’t feel this is equitable. All students should have a certified teacher in front of them in the classroom.”

Still, the principals said they feel the return to the classroom has still been worthwhile, giving students an important social and emotional boost. The West Side principal said virtual instruction in the classroom is working better than expected. For instance, one kindergarten teacher worked solo with almost 30 students in a remote class earlier this year. Now, some of those students are in the classroom with her on the screen — and another adult is in person who can troubleshoot, answer questions in real time, oversee some small group learning and build a connection with them.

The principal said the more common district scenario — in which teachers are back in the classroom working with students in person while some students log in from home — has proved more challenging. Educators have shared they are struggling to engage their remote students effectively.

Wendy Oleksy, the principal at Columbus Elementary in Ukrainian Village, said classrooms are being supervised in person by new support staffers who don’t have teaching credentials. She brought them in early to go over classroom management tips and other preparation.

“In every email with parents, the message is, ‘Please expect changes, flexibility, understanding,’” she said. “We have put it out there, and things might change again.”

A spark for learning

Matthews, the National Teachers Academy mother, said her fourth grader handled remote learning well academically, keeping up her grades and attendance. But she sorely missed the social aspects of school in person.

“She practically ran into the school that first morning,” Matthews said. “When she came out of the school, you could see her joy.”

At National Teachers Academy, fourth graders have separate social studies and math/science educators, so her daughter’s class has a teacher in person for half the school day and a remote teacher during the other half, with a teaching assistant in the classroom. The girl spoke excitedly about recess and lunch with her classmates.

One of those classmates is Beth Van Opstal’s daughter. Van Opstal, who is a pediatrician, said it was important to her family that all teachers at the schools who wanted to work from home were accommodated. Even with a teacher logging in from home, students still get to interact with peers and get guidance from adults in the room.

“We are still in a pandemic and making the best of it,” she said. “Nothing is going to be perfect.”

Van Opstal’s prekindergarten son has been in the same situation since January. His teacher is projected on a screen, while a teaching assistant and a long-term substitute teacher are overseeing learning in the classroom. The arrangement seems to be working out well: Her son talks about his teacher as though she is in the classroom.

Alyssa Choate, who has a first grader at Oscar Mayer Magnet School on the North Side, said her school’s principal wanted to avoid assigning remote teachers for in-person students. Chaote’s family faced a tough decision: To return to campus, her daughter would have to switch teachers and classrooms. Her daughter insisted she wanted to go back to school.

The classroom is different. In contrast to the hands-on, collaborative Montessori approach the school typically practices, desks are spaced six feet apart, lunch is eaten behind plexiglass dividers, and recess is held within an area for each student marked with chalk. But Choate said her first grader has been thrilled to be back.

“I was up at night wondering if we made the right decision,” she said. “Seeing her joy and excitement and spark for learning return has been so reassuring.”

District leaders have said that as the pace of teacher and staff COVID-19 vaccinations picks up, they expect more employees will return to campuses during the school year’s final quarter. Schools leaders say they, too, are hopeful more students will return in April, and more teachers and staff will be back after receiving vaccines.

“I know students are struggling at home,” the West Side principal said. “We see it in their grades and attendance.”