Please ensure Javascript is enabled for purposes of website accessibility Could Chicago’s school reopening deal set a higher bar for other districts? - THE CHICAGO HERALD Press "Enter" to skip to content

Home » Could Chicago’s school reopening deal set a higher bar for other districts? 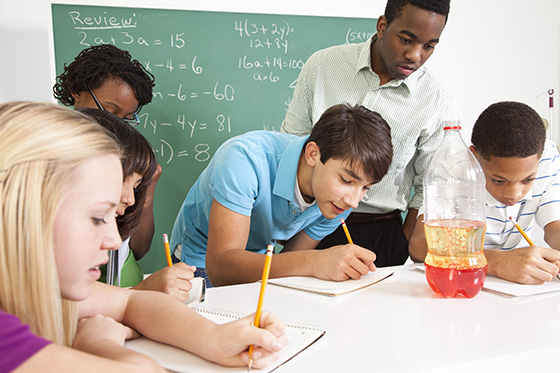 Could Chicago’s school reopening deal set a higher bar for other districts?

During tense negotiations over reopening Chicago’s schools, the district and its teachers union accused each other of refusing to budge from inflexible positions.

But the tentative deal the two sides struck over the weekend involved significant compromise — and may have yielded the country’s most detailed, far-reaching school reopening agreement, experts say.

If rank-and-file union members approve it in electronic voting Tuesday, the agreement could help set the pace for deals in districts that continue to negotiate with their teachers unions on how and when to reopen schools.

“This is the most comprehensive agreement for reopening schools that we have seen around the country,” said Brad Marianno, a professor of education policy and leadership at the University of Las Vegas, who has been tracking district reopening agreements since spring with a team of researchers. “It’s really setting a new standard for other districts.”

Chicago ceded significant ground to the union on a number of issues, perhaps most notably by delaying the reopening for most elementary students by a month or longer to allow more teachers and staff to get vaccinated. It also committed to weekly vaccine dose shipments, beefed up its school testing plan and gave schools more flexibility to accommodate employees who are not ready to return to school buildings.

The union made some concessions as well, backing off from a stance that all school staff are fully vaccinated before campuses reopen — a hard line some unions in California and elsewhere have continued to embrace.

Some of Chicago’s dynamics may be unique. The city’s union gained leverage after members narrowly backed refusing to work remotely and going on a strike if the district locked them out virtually — a confrontation unions elsewhere might be more loath to force.

But as a slew of urban districts and their teachers unions, including in Philadelphia and Baltimore, try to come to a consensus about school reopening, here’s how Chicago resolved a few key disagreements — and what that could mean for unions elsewhere.

Vaccines: Who gets them and when

In Chicago, the teachers union initially demanded that in-person schooling should not begin until all teachers had been offered the coronavirus vaccine. The district balked at waiting that long, pointing to supply issues at the federal level and to studies suggesting schools could reopen safely before employees are vaccinated if they follow strict safety guidelines.

By late January, with vaccination supply slowly increasing each week, the district offered to prioritize vaccines for staff at schools in hard-hit communities. Ultimately, the union got a commitment that the district would offer at least 1,500 doses to its employees each week and would increase that number as federal shipments pick up — though some teachers decried an arrangement that means many would be expected to return after receiving only one of two vaccine doses. Separately, the city would supply shots to staff in some of the city’s hardest-hit neighborhoods through the city’s Protect Chicago Plus program.

By the weekend, Chicago also agreed to jumpstart reopening with 2,000 additional doses this week for prekindergarten and special education staff returning to classrooms, as well as employees with household members at a higher COVID risk. That’s despite earlier concerns from officials that setting aside bulk vaccinations for teachers would reduce what’s available for seniors and other essential workers.

Providing vaccines to teachers remains a key sticking point in school reopening talks across the country. With supply lines in flux, many districts have been reluctant to spell out specific vaccine set-asides. In this case, Chicago’s mayoral control of schools may work to teachers’ advantage, putting the city in the position of making a guarantee — something that could prove difficult elsewhere, said Joshua Starr, the CEO of PDK International, a professional organization for educators, and the former superintendent of Montgomery County Public Schools.

“If you have this power, you might as well use it,” he said.

Early on, the school district said that every teacher needed to return to classrooms unless they had a specific accommodation for medical or family reasons. That even extended to teachers and staff whose students fully elected to continue learning remotely.

The union balked, arguing that all educators should have the option of working remotely — and that asking educators to report to empty classrooms to teach virtually was illogical.

Ultimately, the union won key concessions on this point, pushing the district to grant accommodations to all members who are themselves at a higher risk of coronavirus complications or are the main caregivers for a high-risk family member. (The union had wanted members with anyone in their home at elevated risk to receive accommodations, and disagreements over which medical conditions should qualify snarled the talks.)

The district agreed to make every effort to accommodate staff who live with someone at a higher risk but are not that person’s primary caregiver. For others, it offered unpaid leave with benefits until they can receive vaccines — an option that technically means teachers and support staff would not immediately be forced to return to school buildings if they have safety concerns. The tentative agreement would also give schools more flexibility to grant staff accommodations, such as in cases when all students in a class have opted to continue learning remotely.

But this is an area in which case-by-case decisions the district makes could put educators and district administration at odds, Marianno said: “The implementation is going to be where the rubber hits the road.”

Marianno said the Chicago tentative deal is the first time he has seen specific metrics for quarantining classrooms, shuttering school buildings and reverting back to remote learning spelled out — an issue many districts have sought to keep out of written agreements.

Negotiations dragged out on this issue, with the district and the union at some points seeming hopelessly at odds. In December, the union put forward a 3% test positivity threshold to reopen schools, which the district rejected and some public health experts said was overly stringent. District leaders balked at spelling out a metric that would determine a districtwide return to virtual instruction. They had said they would put school reopening plans on hold until the case-doubling metric hits 18 days.

More recently, the district suggested tying continued in-person learning to the positivity rate of random surveillance testing of school employees. The tentative agreement sets a more complex metric for switching back to fully remote learning: That would happen if the city’s positivity rate goes up seven days in a row, with each daily rate at least 15% higher than the week before, and the rate on the seventh day is 10% or higher.

Beth Van Opstal, a Chicago physician and district parent, said that metric is truly a compromise: The district did agree to base reopening on a broader city metric rather than school-based testing, but the bar for closing schools is clearly higher than the union would have liked to see. The coronavirus has simply been too unpredictable to speculate on how likely the city might be to hit this metric later this school year, she said.

“There are still concerns about variant strains, which may cause rates to rise again,” she said. “And as we open up the city in other ways, such as bars and restaurants, there may be other locations of spread again.”

Testing and other issues

Back in December, Chicago said it would offer surveillance testing to 20% of staff without coronavirus symptoms once a month. Under union pressure, the latest plan is more robust: The district will offer tests to all students and employees with coronavirus symptoms. It will test all employees as well as some students weekly in 134 schools in areas of the city with high COVID-19 rates — and half of staff in other schools. And it will offer tests to employees and students age 10 and older newly returning to school buildings.

The union also successfully pushed the district to form school-level safety committees with some power to enforce health and safety protocols.

Marianno said other districts will likely use the agreement as a template.

“Is it a win for the district to start reopening schools? Yes,” he said. “Is it a win for the union to get detailed safety protocols in a legally binding document? Yes, absolutely. There are winners on both sides here. Hopefully, they are able to move past the antagonistic relationship that has dominated bargaining in Chicago pre-COVID.”

This article was originally published on Could Chicago’s school reopening deal set a higher bar for other districts?