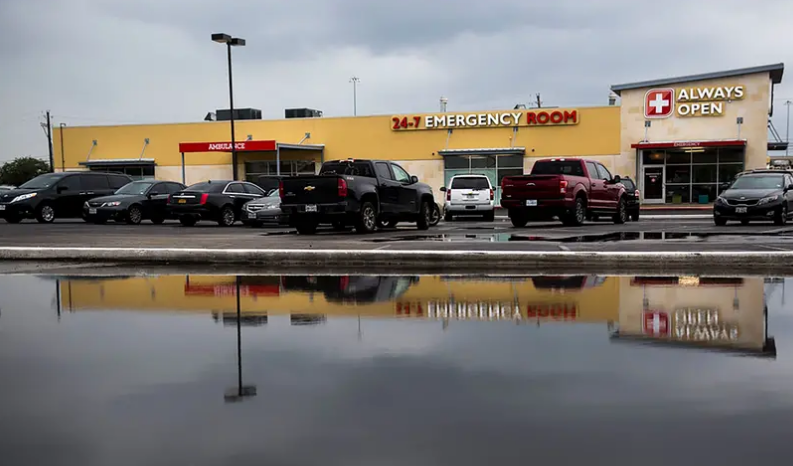 COVID-19 testing has become a “cash cow” for freestanding ERs in Texas, experts say. And it’s getting out of control.

Edgar Barguiarena and his fiancee, Marissa Javaid, wanted to see family in Houston over the holidays, so they decided to get COVID-19 tests before their trip.

Javaid noticed a drive-thru testing site at Austin Emergency Center on South Lamar. It was advertising results within 48 hours, which they thought was perfect.

“They had maybe a banner that said ‘PCR testing with a quick turnaround,’” Barguiarena said, “and we were looking for that.”

Barguiarena and Javaid drove out to the ER on a Monday morning right before it opened. They waited an hour and a half to get tested; then the process took another 30 minutes.

“The test itself went fairly smoothly,” he said. “We spoke to a nurse that had asked some very basic questions beforehand, and then we had a doctor come through a few minutes after that to do the actual test itself.”

Barguiarena said they gave staff their health insurance cards and were told they probably wouldn’t have to pay anything out of pocket; their insurance would take care of it.

All they had to do at this point was drive away and wait for results. About two days later, they learned they were in the clear: Both tested negative for COVID-19.

Weeks after that, Barguiarena was looking at his insurer’s website. He was curious about the cost of the test and expecting it to be about $200 or $300.

“The reality was quite stark,” he said. “It ended up being closer to almost $2,000 that was ultimately charged.”

“Importantly for the patient, most major insurance companies will fully cover emergency room visits for COVID-19 related issues,” the spokesperson said. “Moreover, if an insurance company were to bill a patient for an out of network visit to our emergency room (i.e., if the bill were to go to patient responsibility), our billing company will go to bat for the patient and will appeal on their behalf.”

Even though he’s not responsible for the bill, Barguiarena said $2,000 for one test seems high for a test that’s $167 on average.

“That was surprising, honestly,” he said. “It just seemed like an exaggerated cost.”

The proliferation of freestanding ERs in Texas

COVID-19 testing has become big business for freestanding emergency rooms in Texas. These facilities have been charging insurance plans thousands of dollars for a single COVID-19 test.

Advocates say it’s driving up the cost of health care, and they want state lawmakers to step in.

Freestanding ERs have been in Texas since about 2009, said Jamie Dudensing, CEO of Texas Association of Health Plans. She said they don’t exist in most other states.

Kevin Herrington, the president of the Texas Association of Freestanding Emergency Centers, said they were designed to be “in the community where the need is,” particularly in places that don’t have nearby hospital emergency rooms.

But they have proliferated. There are 200 freestanding ERs licensed with the state. Many are in big cities, too, which already have hospital emergency rooms.

Dudensing said people often mistake them for urgent care centers, also known as a “doc in a box.”

“They look and feel just like an urgent care facility,” she said, “because they are located in the same type of strip malls.”

But they are different from urgent care centers in some very big ways. Namely, they can bill patients as if they were a hospital emergency room, Dudensing said, which means they get to charge something called a facility fee.

Facility fees are what hospital ERs charge for the all their overhead costs — basically, all the doctors, technicians, machines and nurses in that hospital.

“And these could be really expensive fees that aren’t really involved with the care you were given,” Dudensing said. “And they have the ability to charge that same facility fee even though they don’t have any of the same overhead cost.”

Freestanding ERs initially were meant to provide emergency care. But over time, she said, a lot of them have started handling the stuff urgent care facilities do, which is relatively minor stuff like allergic reactions, colds, stomach issues and preventive screenings. But freestanding ERs charge a big fee for that care.

Dudensing said this nonemergency care has become a growing chunk of their business.

And then the pandemic came.

Herrington said patients were desperately seeking tests, but they were hard to come by.

“From a consumer standpoint, there was very little access points for COVID-19 testing,” he said.

He said local health officials were struggling to get sites up and running, but freestanding ERs already had enough of the machines and resources to set up testing sites fairly quickly.

And, Herrington said, they had the bandwidth to take this on.

That “design flaw” was the rules in place — or lack of rules — about how to bill people who aren’t coming inside for care, but are coming to see medical staff for drive-thru testing.

Herrington said many freestanding ERs kept their usual system in place for these patients.

“[These] billing components that are going to happen automatically,” he said. That means adding a facility fee even if someone never left the car.

In retrospect, Herrington said, this is “not the appropriate way to handle the situation.”

In late September, the Texas Association of Freestanding Emergency Centers sent a letter to members saying it strongly opposes “the practice of billing excessive fees” for COVID-19 testing.

“Improper billing practices include charging facility fees or emergency-level professional fees that are inconsistent with the level of care provided to a patient,” the group wrote. “In particular, facility fees and professional fees for COVID-19 patients should only be used for patients who receive testing and associated services inside of a licensed freestanding emergency center and who are seen and evaluated by a physician.”

But this, of course, is not binding policy, and the practice has continued.

Part of the reason this has continued is because patients haven’t had to pay for these exorbitant fees out of pocket.

“There’s a federal law that says the insurance companies are supposed to cover the cost of the test without any cost to the patient,” he said. “And I think what is happening here is that these facilities are testing the limits of that and seeing how much they can get reimbursed for something as simple as a COVID-19 test.”

And, it turns out, there aren’t many limits.

Hutson said this whole thing really looks and feels like price gouging. But by law, it might not be.

According to state law, Dudensing said, freestanding ERs are allowed to bill up to 200% of the average charge for a service, which she said can be a really high ceiling.

“If I heard that someone got a $10,000 fee for a COVID test that should have just cost $150, I don’t care if it meets that threshold or not, that’s price gouging,” she said. “That should just have not have happened.”

“Breathing life back into … bad actors”

Dudensing said these facilities had a history of price gouging and giving misleading information about services or insurance coverage issues when they first came to Texas. For a while, state lawmakers had started reining them in.

There was a time when bad actors started disappearing, Hutson said.

“This COVID-19 testing price gouging that we are seeing is really breathing life back into those bad actors,” he said. “And so the Legislature is going to have to step back and look at what they did to try to fix the problems and what needs to change now to really rein those bad actors back in.”

Hutson said there should also be enforcement of existing laws and protections.

The Texas Association of Health Plans sent a letter to state health officials Jan. 29 asking them to enforce state regulations for freestanding emergency rooms regarding billing, advertising and disclosures. In the letter, it asked Texas to “take a more active role to rein in egregious billing by [freestanding ERs].”

“I don’t know where the end is on this,” he said. “And you know, if you can get insurance companies to pay thousands of dollars for a test, then you know that is an absolute cash cow for your business.”

Why you should care

Even though these costs aren’t coming directly out of consumers’ pockets, Hutson said, they eventually will.

Dudensing said this also contributes to the rising cost of health care overall, which is particularly egregious during a national health crisis.

“We shouldn’t be wasting valuable dollars that we all need in health care on $5,000 COVID tests,” she said.

At the very least, reining in these charges will also stop spooking patients.

In a Kaiser Family Foundation poll a few years ago, 67% of people surveyed said they worry about unexpected medical bills. It’s actually the thing people are most afraid of not being able to afford in their lives.

Anissa Mathiasz, who got a COVID-19 test at an Austin Emergency Center a month and a half ago, said she panicked when she saw her insurance was getting charged over $1,000.

“I was like, ‘Whoa, that’s really high even just for a COVID test,’” she said. “And I know that it is still pending; they are still processing the insurance. But just the fact the test is out of that much I will have to be paying seems really crazy.”

Mathiasz said she was worried she might have to pay some of it because it was so expensive. Despite knowing now she probably won’t, she said she still thinks this is the kind of thing that makes people upset about the U.S. health care system.

“This is just a perfect example of like, ‘Wow, this was so unnecessary and could just appear to be a money grab depending how it turned out,’” she said.

This article was originally published on COVID-19 testing has become a “cash cow” for freestanding ERs in Texas, experts say. And it’s getting out of control.