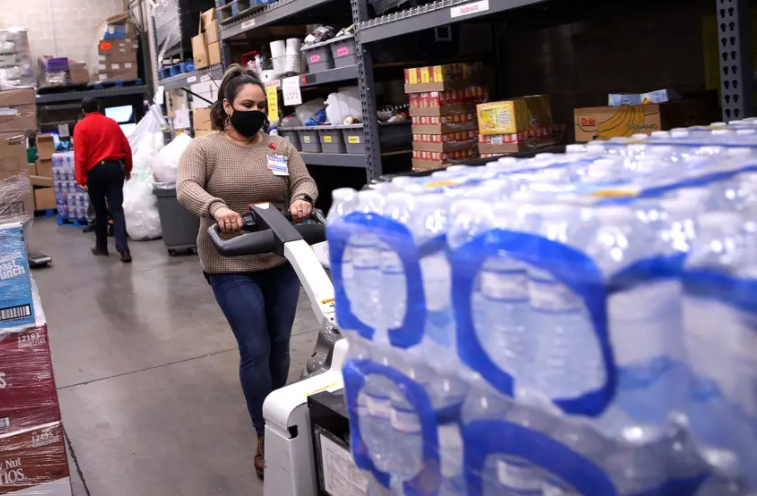 The crisis — which stretches into at least its fifth day Friday — in the city of 101,000 people has left residents frustrated and scared after the city told them Monday night to cease all uses of water other than flushing their toilets. They were also told that first boiling the water before use would not make it usable and, instead, only more dangerous.

The Texas Commission on Environmental Quality found the water, which smelled like chemicals or mothballs, is contaminated with benzene, acetone, naphthalene and other chemicals consistent with industrial production.

The winter storm sweeping the state has complicated the struggle to restore safe water to the community and thwarted efforts to get water to those who need it. Hazardous road conditions have slowed water testing, as the tests need to travel more than three hours from San Angelo to a lab in Austin, and the conditions also delayed opening water distribution sites. At least one local group had to cease meal and water deliveries to the elderly on Thursday.

“We’re facing crisis upon crisis, with a global pandemic, arctic blast and water issues,” said Ashley Ammons, president and CEO of the United Way of the Concho Valley.

The city has narrowed down the investigation to the area in and near the PaulAnn neighborhood, where Debra Treadway lives on the northeast side of town.

“How long is this going to go on?” she said.

Boiling the water would only make contamination worse, releasing the chemicals into the air. Without more information available about the extent of the contamination, the only action that was absolutely safe was to stop using it. Benzene is known to cause cancer. Acetone can be used industrially as a solvent, and naphthalene can be produced from coal tar or oil for use in plastics, pharmaceuticals and other products, according to the Environmental Protection Agency.

“I’m wondering what health effect this is going to have on me,” Treadway said.

Earl Lott, deputy director of the office of water for the Texas Commission on Environmental Quality, said there is no EPA standard for the other contaminants.

“They’re not something you’d expect to see in drinking water,” he said. “No amount of those is acceptable.”

Naphthalene concentrations were found in one test to be as high as 141 micrograms per liter, according to data from the TCEQ.

“I sort of thought it smelled like propane gas,” Kinley Hurt Briseno said of the water in her home.

She’s a mother of two young children and resident of San Angelo. Briseno became concerned about her family when her husband took a shower Sunday night. He said he felt nauseous. She felt sick, too.

“We were light headed,” she said.

They decided to eat out that night and later left town to stay with family.

“We packed our things,” she said. “I can’t realistically keep two kids in the house with no water.”

The cause of the contamination is still under investigation. But, according to city and state officials, the source is likely an industrial company connected to the water system. Water may have flowed into an industrial plant, came into contact with dangerous chemicals there, lost pressure, and flowed back out into the system where it infiltrated nearby homes.

“We understand this is a severe inconvenience, but what we want to do is keep customers safe,” Allison Strube, the water utilities director for San Angelo, said during a press conference Wednesday. “This is not coming from the lake, the river, or the groundwater supply.”

United Way began delivering water to residents Tuesday. Calls for help have been constant, said Ammons, the local United Way CEO. Some people have COVID-19 and can’t leave their home due to quarantine. Others are elderly or disabled. Now, the winter storm has made it unsafe for many more to drive to pick up the water. Ammons said she had more than 150 missed calls on her office phone Thursday after being away for two hours.

“The longer it goes on, the worse it gets,” Ammons said of the water crisis. “There’s a lot of folks who are working long, long hours, from city government, to nonprofits, churches, that are making sure that there’s not going to be anyone in this community that will not have what they need.”

The city first received a complaint about an odd smell in water on Friday, said Brian Groves, spokesperson for the city of San Angelo. By Monday, officials determined the entire city could be at risk. Since then, officials have slowly released some areas from the water restrictions as they narrow down the area of contamination.

But half the city was still without water late Thursday, especially in a northeastern neighborhood where several industrial plants operate.

Treadway, lives on the northeast side of town in a mobile home. To keep her pipes from freezing, she’s forced to keep her water dripping from the faucet. She’s worried that the chemicals evaporating into the air could be dangerous for her while she’s trapped inside due to the weather.

“We don’t really have a choice,” Treadway said. She’s running a fan above her faucets.

Meanwhile, residents on the southern side of town are located on a high plane, hydrologically separated from the other half of the water distribution system, Strube, the water utilities director, explained during a Wednesday press conference. That’s why officials determined there was no risk of contamination on that side of town.

The city also found that the water was not contaminated at the source, meaning that neither the lake where the city gets its water, nor the central water treatment plant, are at fault.

More likely: An industrial plant connected to the water supply has a problem with “backflow.” Lott, of the TCEQ’s office of water, said that the state is investigating all the connections to the water system to find the source of the contamination.

“The [volatile organic compounds] that were discovered are not something you’d see from a typical household,” he said. “We’re focused on the industrial sources.”

When backflow isn’t prevented properly, water can flow in both directions, he said. That can happen due to a loss in pressure to the system, but the state requires any entity connected to the water system — residential or industrial — to have a backflow prevention device to stop water from reversing back into the system at large.

“There are quite a few industrial sources in the area,” he said. “It is a pretty exhaustive search, and it could take a while.”

Officials hope they will soon be able to fully flush the contaminants out of the water at a fire hydrant or other source, and restore full service to the city. But that, too, could be delayed due to weather conditions, Lott said, since after flushing, officials will need to test the water again to be sure it’s safe.

Residents say that even as officials narrow the area of contamination, they’re left with more questions than answers. Christopher Hinds, who grew up in San Angelo and now lives there with his wife and daughter, said he’s worried about the long-term health effects of exposure to the chemicals. He turned on the water Wednesday to a strong stench.

His daughter, age 7, is upset she can’t go to school. He is upset regulators didn’t prevent this — and that the city, in his opinion, has not done enough to educate the public on the potential harms.

“They’re acting like they’re doing this out of an abundance of caution,” he said. “But these are known carcinogens.”

Hinds, a substitute teacher, used to be a bartender. In San Angelo, tips from oil and gas workers paid his bills. It’s a conservative town, he said, and people generally support the businesses that operate there. But the water crisis has made him concerned about how industry is impacting their lives, and said state and local governments had failed residents.

This article was originally published on “Crisis upon crisis”: Industrial pollutants leave San Angelo residents without water as winter storm bears down