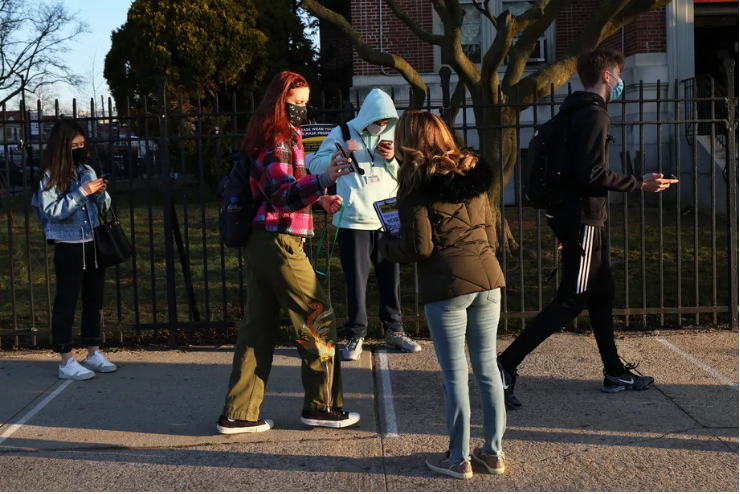 Starting Monday, individual schools — not entire buildings — will shutter if there are four or more cases within a week in different classrooms, and if test and trace investigators find that these cases were contracted inside of the school, officials said. The city will now ramp up testing to 40% of students and staff when there are two to three new cases detected inside of a school. Those swabs will be conducted on the next scheduled testing day. (Officials did not say whether the school would continue the expanded testing beyond then.) Typically, schools test 20% of students and staff weekly.

“We have heard the voices of our school communities calling for increased stability around in-person learning, as long as we can do so safely,” Chancellor Meisha Porter said.

Individual classrooms will still close when someone tests positive for the virus. Some public health experts have questioned the need to shutter classrooms since students are social distancing, but in this case, Porter told reporters, “We must still assume that everyone is a close contact.”

The rule changes the policy that entire school buildings must close for 10 days when there are two or more positive coronavirus cases that have no clear links. Even if a school had no positive cases in their community, but shared a building with another school that did, the entire campus would have to shutter.

Outcry over the two-case rule had been growing increasingly loud as the number of repeated campus shutdowns skyrocketed after the city began conducting weekly coronavirus testing for students and staff in the buildings. The city expanded testing from monthly to weekly when it reopened buildings after November’s system wide shutdown, first inviting back students in elementary schools and in District 75, which serve children with complex disabilities. The frequent closures were causing havoc for families and disrupting teaching and learning as students and teachers had to pivot on a dime from in-person to remote learning.

The city has seen more than 2,300 closures of at least 10 days since the start of the year, according to public data. At the start of this week, more than 100 schools were in the midst of these extended closures. Two days later that number dropped to one.

Under the new rule, contact tracers must determine if a positive case was contracted within the school. Dr. Jay Varma, senior health advisor to the mayor, acknowledged that determining exactly how someone became infected is an “extremely difficult” task since people may have been exposed in various places. He suggested this would be easier to do for school communities since it’s easier to glean some definitive information about where a child or staffer spent time.

“We recognize that there are imperfections in this and that some of this is an art, but we also feel like we’ve gained enough experience and knowledge that we can do this in a way that is safe and ensure stability,” Varma said.

The contact tracing investigations are the most important part of this change, said Susan Hassig, associate professor of epidemiology at Tulane University. Hassig called the new policy “far more rational” than the two-case rule.

While a numerical threshold alone doesn’t make sense, she believes the requirement to find evidence of in-school transmission in order to close schools is more sound, she said. Transmission inside schools has been shown to be rare when proper mitigation is in place, she added.

Staffers, students, and parents should also feel reassured that testing will increase in schools where there are at least two cases, making it easier to track more cases, and hoped more vaccinations would provide relief, too, she said.

“I think concern is not an unreasonable reaction, but I think that the important thing to remember is that there are multiple layers of protection that should be reflected in the safety protocols within the school environment,” Hassig said.

The policy changes are “really positive” and reflect what the public health community has found so far about in-school transmission, said Amber D’Souza, professor of epidemiology at Johns Hopkins Bloomberg School of Public Health.

She thought the plan would have been “quite safe and robust” without increased testing, but it “helps to reassure the staff and the parents and the others involved that this change is not leading to something being missed and cases growing.”

D’Souza noted that New York’s coronavirus transmission levels are still relatively high, and that public health officials should continue to closely watch schools if rates surge further, noting that “safety measures have been shown to work and are appropriate.”

Since February, de Blasio said the city was reevaluating the rule but had not provided any new details until Thursday, just one day before a new opt-in period for families wanting some in-person learning this year was about to close.

Michael Mulgrew, president of the city teachers union, originally opposed any changes to the rule because he believed it would weaken safety standards at schools. On Thursday, the mayor said the city has worked with the unions to reach this final.

“With our increased knowledge about the spread of the virus, and as more teachers and other school staff have been vaccinated, our medical experts are convinced that the rule can be changed and still maintain safety,” Michael Mulgrew, president of the city’s teachers union, said in a statement. “This change will mean that while many classrooms will continue to close, the number of overall schools closed will decline, a repeated request of both teachers and parents.”

Still, the overwhelming majority of New York City students, or roughly 700,000 children, are learning exclusively from home, and the city must work to convince them it’s safe for them to return to buildings, he said.

“If we are going to have anything like a normal opening in September,” Mulgrew said, “the mayor needs to find ways to assure them that our COVID precautions remain strong and that schools are safe for their children.”