Home » Denied equal opportunity in the marketplace, conservative filmmakers start to fight back 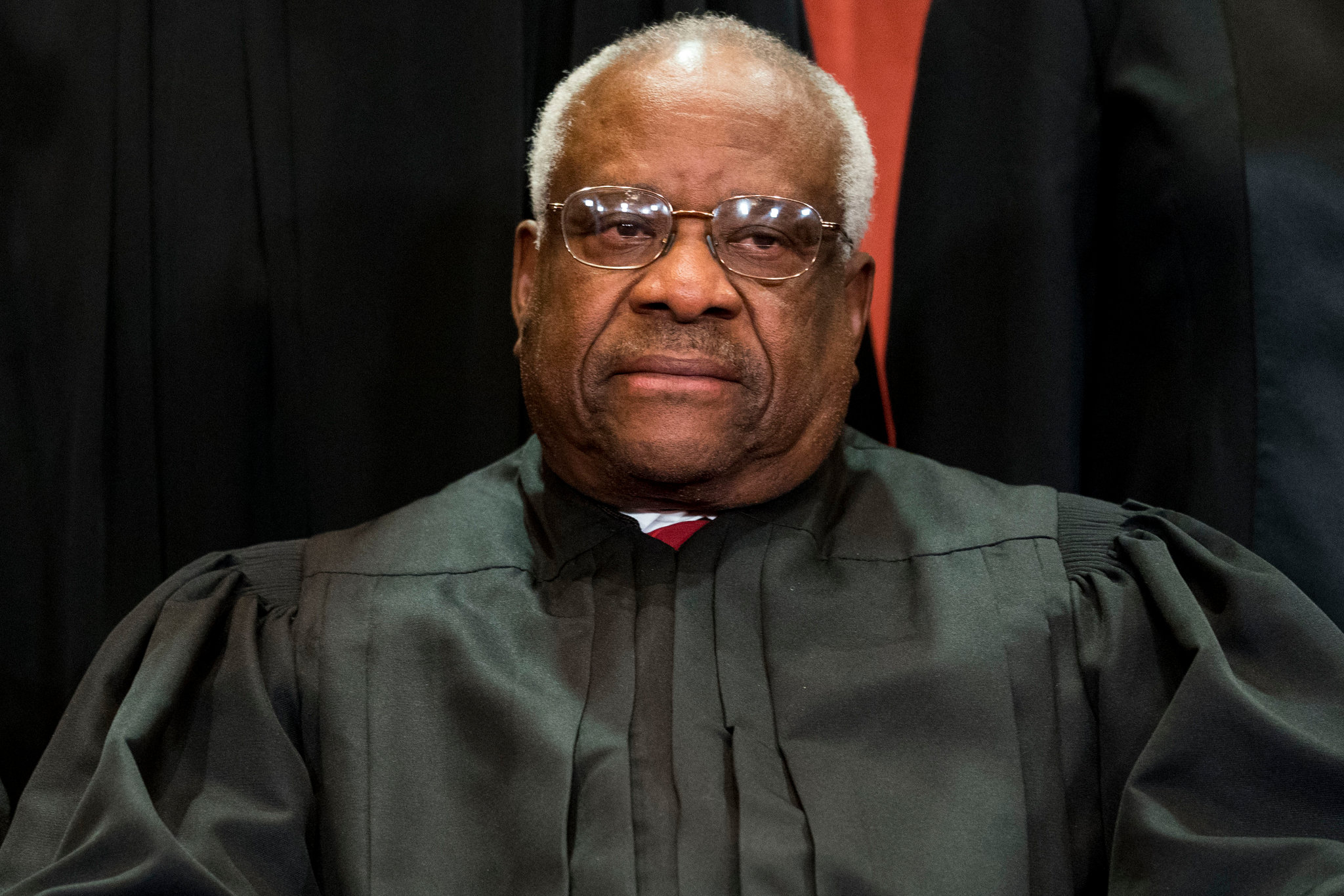 Denied equal opportunity in the marketplace, conservative filmmakers start to fight back

A documentary film about an African American lawyer who rose from poverty and oppression in the Deep South to the highest court in the land would seem a natural for Black History Month. Yet, in February, at the very time its Prime Video service was featuring films highlighting black history makers, Amazon without explanation stopped offering digital streams of “Created Equal: Clarence Thomas in His Own Words.”

While the film was pulled despite having at one time reached No. 1 on Amazon’s documentary charts, the world’s largest online retailer continued to make available streams of less-popular documentaries, including a favorable one on Anita Hill, the former Thomas colleague who nearly derailed his Supreme Court confirmation.

That was frustrating to Michael Pack, writer-director of “Created Equal” and a documentary filmmaker for decades. But it was no surprise to him and the small but growing cadre of other conservative documentarians, who say they face obstacles because of their politics and are starting to fight back against the long odds of “cancel culture.” Black conservative scholar Shelby Steele saw Amazon initially refuse to carry his documentary “What Killed Michael Brown?” last year because it challenged the liberal narrative about the 2014 shooting in Ferguson, Mo., that helped spark the Black Lives Matter movement. Amazon, which relented after a public outcry, did not respond to a request for comment.

Justin Folk, director of “No Safe Spaces,” which focuses on college-based attacks on free speech and features prominent liberals including Dr. Cornel West and Van Jones, along with conservatives such as Dennis Prager, Dave Rubin and Ben Shapiro, said he had a hard time finding a traditional distributor for his documentary because Hollywood saw the film as conservative.

“Despite having big names in our film, a big audience, and a very relevant topic, we were mostly ignored,” said Folk, who said his film, which eventually grossed $1.3 million, was rejected by the prestigious Telluride Film Festival. “In one case, a major distributor actually admitted to us that they think our film is a winner but they can’t get behind it because Dennis Prager is in it.”

Conservative filmmakers faced little discrimination in the past because there were so few of them. That started to change in 2012, when conservative commentator Dinesh D’Souza’s “2016: Obama’s America” became the second-highest-grossing political documentary of all time ($33 million).

The years since have been a golden age for documentaries. Streaming services such as Amazon, Netflix, and Hulu have created major distribution channels, matching content with massive, algorithmically targeted audiences. This, in turn, has led to explosive growth in filmmaking. Documentaries that in the past might never have seen the light of day – since their economic viability would be tied to packing movie houses – can flourish today, particularly lately with people more homebound due to the coronavirus pandemic.

Typically it was liberal activists, not conservative polemicists like D’Souza, who made documentaries. As Thom Powers, who runs America’s largest documentary festival, DOC NYC, told CBS News, the best documentaries try to make a difference. “There have been films that have gotten people out of prison, like the ‘Paradise Lost’ series, or Errol Morris’ ‘Thin Blue Line.’ ‘Super Size Me’ totally changed the conversation around fast food. ‘Inconvenient Truth’ totally changed the conversation around climate change. So all over the world, you can see documentaries having an effect.”

But the idea of “making a difference” has generally trended in one direction politically, illustrated lately by Barack and Michelle Obama’s film production deal with Netflix, which has already yielded a best documentary Oscar. Virtually ignored is an underserved niche in the market.

“More than 70 million Americans voted for Donald Trump in the November election,” the Hollywood Reporter noted in a March 11 story. “And, at the moment, there’s little Hollywood content that directly appeals to them. That leaves a big opening for those willing to risk ostracization from the rest of the industry.”

Industry support is crucial because it helps in raising money, in earning film festival slots to persuade a distributor to get a film in front of an audience, and enticing journalistic outlets to cover and review it.

“If you’re on the left, there’s a whole infrastructure that enables you to make things very easily,” said D’Souza, who illustrated his point by citing what he calls the “charmed life” of left-wing filmmaker Michael Moore. Each new Moore film is considered a pop-culture moment. They are featured at the top festivals, where they often win prizes – to go along with his Oscar for “Bowling for Columbine.”

“He’s on the ‘Today’ show and ‘The View.’ … There’s a whole apparatus of publicity in place,” D’Souza added.

D’Souza has succeeded without enjoying such support. But he said the odds against conservatives have worsened in recent years because of suppression by both Big Tech and woke corporations. His 2020 film, “Trump Card,” scrapped its planned theatrical release for a video-on-demand slate due to COVID-19, but the hurdles didn’t stop there.

“The radioactive connection wasn’t me, but Trump,” D’Souza says. “Trump Card” hit video-on-demand services several weeks before the 2020 presidential election, by design. D’Souza says Amazon placed a large order of “Trump Card” DVDs, which his company met. But some Amazon customers were told the product was “out of stock” and wouldn’t be delivered until after Election Day.

“I’m not used to these kinds of obstacles,” he says. “I never thought of Amazon as a left-wing company.” He’s changed that view after seeing it take part in a concerted takedown of Twitter alternative Parler as well as it removing books such as “When Harry Became Sally,” which criticized elements of the trans movement.

“What Killed Michael Brown?,” produced by filmmaker Eli Steele in tandem with father Shelby, faced similar discrimination. Amazon initially rejected the handsomely mounted, jazz-filled work, saying it didn’t meet the streaming giant’s quality standards and that no appeal would be heard. That news brought attention from the Wall Street Journal editorial page and other media outlets, and Amazon quickly reversed course. Eli Steele says that opened his eyes to how much sway Amazon holds over the film marketplace.

“The numbers between Amazon and other platforms are not even comparable,” Steele says of its sizable audience reach. He says most film festivals “lack the backbone to show perspectives outside of their echo chambers,” but he doesn’t want ideological diversity to be forced into the current system.

“Anyone can start their own film festival and they program it however they wish,” he says. “So why not plan a prestigious film festival that crosses all sorts of lines and invites healthy dialogue and debate?”

The conservative film sub-genre is attracting some unlikely participants. Radio talk show host Larry Elder made a splash in 2020 with “Uncle Tom,” a documentary letting black conservatives like him share their views and discuss how they’re treated by select liberals. The title captures the latter sentiment.

Elder, a best-selling author and nationally syndicated talk show host, says right-leaning documentaries often turn to private sources, like affluent Republicans, to fund their work. His film got little attention outside of conservative outlets at a time when the media invested heavily in telling black stories by black creators.

“It was ignored by the Hollywood ‘we want diversity’ community, including all the film reviewers of the major newspapers and trade publications like Variety and The Hollywood Reporter,” says Elder, who co-wrote, co-produced and appears in the film. “Uncle Tom” boasts only three official reviews at RottenTomatoes.com, and no critics’-average “Tomatometer” score, in contrast with a robust 96% “fresh” rating from users.

Yet none of that stopped Elder’s documentary from turning a tidy profit. The film’s virtual opening weekend last June grossed $400,000. Elder notes the film quickly recouped its costs and ended up earning multiples of its budget of some $450,000 including post-production. It helped that Elder has a hearty social media presence – 859,000 followers on Twitter alone – along with a syndicated radio show to promote the project.

Its commercial success was also aided by the development of alternative distribution platforms, showing that markets can punish discrimination, and that discrimination may serve as the mother of innovation.

Initially, “Uncle Tom” was sold exclusively through a partnership with SalemNOW, part of the conservative media company that distributes Elder’s radio show. Following that 70-day exclusive with SalemNOW, the film’s website (UncleTom.com) became the primary sales location, with additional platforms added over the ensuing few months, including iTunes, Amazon and, later, Amazon Prime.

The team behind the film didn’t submit it to most major film festivals, save for the boutique USA Film Festival in Dallas. The documentary’s conservative bent helped shape that decision, as did restrictions in place from the ongoing pandemic.

RealClearInvestigations reached out to multiple documentary groups for comment on this story, including DOC NYC, the Southern Documentary Fund, the Center for Independent Documentary, Docs in Progress and the International Documentary Association. None responded to those queries. Neither did several major film festivals, including Sundance, Telluride, Slamdance and the Toronto International Film Festival.

Other conservative filmmakers are going outside traditional channels. SalemNOW began streaming Pack’s “Created Equal” on March 30 in response to Amazon’s decision to pull the film. (It’s listed on Amazon as a DVD but often out of stock.) Christopher Rufo has used YouTube to distribute his short films, including “Chaos by the Bay: The Truth About Homelessness in San Francisco” and “Mob Rule in Seattle.”

“I can immediately inject it into the bloodstream of the national conversation,” Rufo said. But, he added, coming out as a right-leaning storyteller in the documentary field is “complete poison to your career.”

“People tell me, ‘You’re now conservative. I can’t even work with you,’” says Rufo, who adds documentary organizations that once collaborated with him suddenly stopped returning his calls. “It’s kind of shocking. … They can’t even process how anyone would have another opinion.”

Documentary producer Nadia Gill of Encompass Films noted the industry’s allegiance to identity politics in a recent column for Persuasion.com:

Gill, who describes her political philosophy as “center left,” says modern documentaries can be broken down into two categories – classic and commercial, the latter fueled in part by Netflix’s robust documentary lineup. The former, Gill says, isn’t just liberal in nature but “fringe left,” while the commercial market offers some room for right-of-center storytelling. Either way, conservative documentaries rarely grace the film festival circuit.

“The vast majority of submissions [to film festivals] are, in fact, going to be from the left perspective,” she says. “It would be good for our industry to hear those voices [from the right] … and have an honest conversation.”

That won’t happen unless more independent funders show up to support this brand of art. Left-of-center storytellers can lean on a variety sources, including the Ford Foundation (2017’s “Whose Streets?”) and the MacArthur Foundation (2010’s “How Democracy Works Now”) to finance their work, Gill says.

“Progressive institutions have set themselves up for years to make these films,” she says. So far, few non-left groups have copied that approach.

Amanda Milius agrees. “The donor class of the right has to start acting like the donor class of the left,” says Milius, director of the 2020 documentary “The Plot Against the President,” based on the book of the same title by Lee Smith, a freelance contributor to RealClearInvestigations. “Put that money into issue-based culture … and creators that hold the same values you do. Make something that lives forever.”

“You’re probably gonna make your money back and more,” she adds, “plus, you’re investing in actual change of the culture.”

This article was originally posted on Denied equal opportunity in the marketplace, conservative filmmakers start to fight back