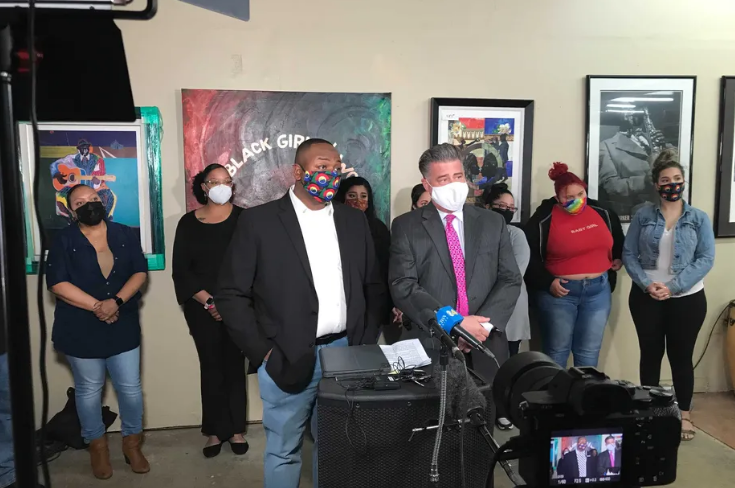 Denver school board member on sexual assault allegations: ‘If there is something I did, then of course I would take accountability’

Denver school board member Tay Anderson denied accusations of sexual misconduct at a press conference Sunday and said he welcomed a “full investigation” even as more allegations surfaced throughout the weekend.

“I just want to be able to know the truth,” Anderson said Sunday, “and if there is something I did, then of course I would take accountability. I wouldn’t run from it.”

On Friday, Black Lives Matter 5280 issued a statement saying a woman approached the group in February to say Anderson had sexually assaulted her. The woman wishes to remain anonymous, it said. The allegations “have not gone through a formal legal process,” the statement said; rather, the woman requested Anderson issue a public apology and seek help.

On Saturday, Anderson issued his own statement. “I have not sexually assaulted anyone,” he said. Anderson said he couldn’t take the steps requested of him “until I and the broader community have more comprehensive information.”

The allegations caused an uproar on social media and divided people in the progressive, activist, and teachers union circles from which Anderson draws support. Some declared they “stand with survivors” and said the Black Lives Matter group would not have brought such a serious accusation without a good reason. Others expressed skepticism because the accuser has not come forward herself and because Anderson is a frequent target of conservative critics.

Black Lives Matter 5280 tweeted Saturday that it would “not allow the survivor from yesterday’s statement or any of the other women who came forward afterward to be bullied into showing their faces. … We will release a follow-up statement when the alleged survivors are ready.”

On Sunday, Anderson called a press conference at brother jeff’s Cultural Center in northeast Denver, a community space run by local activist brother jeff Fard. An emotional Anderson stood with supporters, his mother, and a woman he identified as the mother of his child who is due in a few months, and addressed reporters. A lawyer he hired, Christopher Decker, spoke first.

Decker called the sexual assault allegations “a creature of the media at this point,” and said there are no criminal or civil investigations underway. He also refuted statements made by a former leader in an anti-gun violence group of which Anderson was president.

That leader, Madison Rose, was vice president of Never Again Colorado while Anderson was president. They co-founded the group in 2018 after the Parkland school shootings but it disbanded within the year, after board members raised concerns privately about financial mismanagement and sexual harassment.

Rose said she does not consider herself a victim of misconduct by Anderson, but during her tenure at Never Again, numerous women from the organization and from partner organizations approached her with concerns about his behavior. In one instance, a young woman who rebuffed Anderson’s advances was “bullied” into resigning from the board, she said. She also heard him make inappropriate comments to other women in her presence.

In July 2018, Rose was one of six board members to sign a letter asking Anderson to resign from his position as president. The bulk of the letter talks about concerns with financial management of the organization, but the letter also references concerns about sexual misconduct as Anderson was considering a second Denver school board campaign.

In the letter, Never Again board members said they would not go public with their concerns if Anderson resigned from the organization quietly.

“We would also remind you that in the wake of the Me Too movement, voters also really care about how you treat and value women,” the letter says. “Several board members, both past and present, as well as other young women from other organizations, have come forward and have expressed concerns about sexual harassment.”

Anderson was elected as an at-large Denver school board member in November 2019.

Rose’s allegations were first reported by The Denver Post. At Sunday’s press conference, Anderson’s attorney said they were false.

Anderson said he was “troubled by” the letter from Never Again when he received it, but said he understood it to be about how he handled internal issues as president, not about his personal behavior. Rose said it was meant to address Anderson’s personal behavior, but other men in the organization also behaved inappropriately.

As for the allegations by women referenced in the statements by Black Lives Matter 5280, Anderson said, “I want to ensure I and others have a fair, transparent and truly restorative process, and I want the voices of these people to be heard.”

“I am not above the law here in Denver, Colorado, and I must be held accountable if I’ve done something wrong,” Anderson said. “Parents should be able to sleep comfortably at night knowing that on their school board, there are honest men and women and non-binary folks who exist in that space. Right now, parents are confused about what they’ve heard on social media.”

This article was originally posted on Denver school board member on sexual assault allegations: ‘If there is something I did, then of course I would take accountability’