Home » District announces initiative to recruit up to 900 Philadelphia teachers 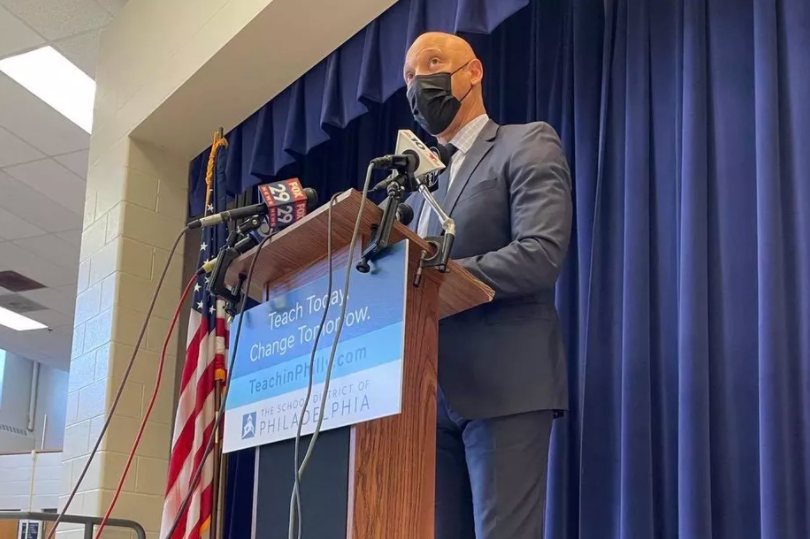 District announces initiative to recruit up to 900 Philadelphia teachers

The Philadelphia school district needs to recruit up to 900 teachers for the coming school year, Superintendent William Hite announced Thursday. To aid in that effort, Hite said the district is launching the “Teach Today Change Tomorrow” initiative.

“Our goal with this campaign is simple, we want to hire talented educators,” he said during the announcement at Cayuga Elementary School in North Philadelphia. He directed those interested in teaching to apply online at teachinphilly.org. Speakers at Thursday’s announcement also included Cayuga teachers, Kati Funck and Joshua Palma-Rodriguez.

In any given year, the district looks to hire 800 to 900 teachers and has about 91% teacher retention, said Chief Talent Officer Larisa Shambaugh. District officials said applicants should “first and foremost have a love for children and figuring out how to meet those children where they are.”

According to the Philadelphia Education Research Consortium, on average, 27% of Philadelphia teachers left their schools and 15% left the school system. The report also revealed the district has increasingly relied on emergency teaching permits, which are issued when a position has been advertised and no fully qualified or properly certificated applicant is available.

Math and science top the subjects where the district needs to fill the biggest number of vacancies, said Shambaug. The district has struggled for years to retain teachers in these subjects.

“We have our teacher preparation programs that prepare a great deal of teachers, but not as many in those fields,” Shambaugh said. “We are all looking for people who have great content knowledge in math and science.”

The district has a teacher residency program where individuals who have the knowledge of math and science come in and learn alongside a better teacher for a full year before they become a teacher by themselves in the classroom.

“It’s something that we look at every year, report numbers on, and want to hold ourselves accountable to,” Shambaugh said. “We have seen an increase in our new teacher hires of color over the past several years, but it has to be an intentional effort. So we have several initiatives that are aimed at thinking about how we expand the diversity to go beyond just the traditional pipeline.”

The founder of the Center for Black Educator Development, is currently leading an initiative to recruit more teachers of color. He said any strategy aimed at locating future teachers must include a strong retention plan.

“Recruitment cannot just be once people graduate from college like it was for me,” El Mekki said. “I was recruited after I graduated from college. When I asked my colleagues, many white women remembered as early as the third grade when they were recruited.”

El-Mekki’s Black Teacher Pipeline aims to identify and cultivate high school and college students for careers in education, offering them apprenticeships starting in high school, mentorship into college, and overall support through their first four years in the profession. Strategies, he said, the district should consider in its effort to attract new teachers.

“We’ve had some great results where they have an apprenticeship, they start being professionally developed,” El-Mekki said. “And this is what I mean by the pipeline that starts as early as freshman in high school.”

Debbie Weiner, a former adviser to the district on teacher recruitment, said retention can be improved by having “a principal who stays in touch, a mentor who helps with instruction and classroom management, a reduced teaching load for the first semester, a clean and safe classroom and building, ample supplies and equipment.”

Brandon Archer, communications director for UrbEd argued if the district is going to hire and retain any teachers, especially Black educators, it should begin with respecting them.

“To have enough respect to value their lives as we send them back into unsafe schools, respect for their voice in policy decisions, and enough respect to not treat them as a cog in the wheel,” Archer said. “The district needs to make every effort possible to support its staff and not place the impossible burden of testing, new programs, or goals and guardrails onto them. Teachers today are risking their lives and careers to support students, it is time the district supports them.”